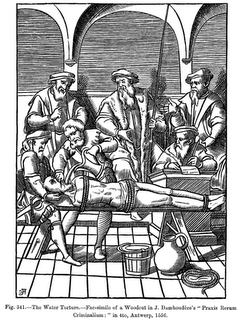 I should know better than to ever let my radio dial stray anywhere near a station that plays Rush Limbaugh. The other day while I was surfing the AM stations I let it stay on Rush Limbaugh for just 30 seconds, but that’s all it took for him to say something that just ticked me off for the rest of the day. Rush Limbaugh is such a lying pig. People who listen to his show must just get stupider by the day. It is unreal.
During that 30 seconds, Rush was in a huff about critics of Bush’s interrogation policy and he suddenly announced that waterboarding is not torture because our own troops go through waterboarding as part of their training.
Bull! They do not!! Argghhh!!! Such a liar!!!!
I can guarantee you that our troops do not get strapped to a board and submerged underwater and made to think they are going to drown as part of any kind of training.
Now there is one secretive program at Fort Bragg, as I understand, where a few elite troops who regularly go behind enemy lines are specially trained to resist torture techniques, one of which is a form of waterboarding. But to imply that all our troops receive such training, or that waterboarding is therefore not a form of torture is B.S.
I remember my dad talking about his Air Force survival training before he was sent to Vietnam. It mainly involved being dumped out in the middle of a desert with little more than a pocket knife and a compass. It certainly did not involve being strapped down and held underwater.
But Rush Limbaugh wants his gullible listeners to think that waterboarding is no big deal. Just another college frat prank like George W. used to pull all the time at Yale. HaHaHa.
Like I’ve said before, torturing people is wrong. I don’t care if we are talking about Osama bin Laden himself, it is still wrong. We are better than that and for our president to insist that we must stoop down to Saddam Hussein’s level is just shameful.
Posted by Mike Thomas at 9/15/2006