Habeas Corpus is not a right, it’s a responsibility

The Supreme Court, by a slim margin, has once again confirmed the responsibility of the U.S. government to assure that all people under our control are treated humanely and responsibly. Part of that responsibility is to assure to the best of our ability that those who are in our custody are there for a legitimate reason.
That is what the writ of habeas corpus is all about. It is not a “right” bestowed on American citizens at birth. It is a responsibility that we have assumed as a nation. It does not benefit our society to incarcerate people without good reason. It is morally and ethically wrong and it places an undue financial burden on taxpayers. So why shouldn’t we do everything within reason to assure that we are not incarcerating innocent people? The purpose of Habeas Corpus is to keep innocent people from being detained, not to let guilty people go free.
A lot of the outrage on the right centers around the perception that we are granting “terrorists” a special privilege that is usually reserved just for American citizens. But the right to not be incarcerated when you are innocent should not be just for American citizens, it should be for everyone. And thus it is our responsiblity to make sure that is so with the people under our authority.
Posted by Mike Thomas at 6/13/2008 No comments:

Our U.S. Immigration and Naturalization Service is about to deport a kid who has been in this country since he was a toddler and who just graduated from high school as valedictorian.

The family arrived in the United States in 1995 on six-month tourist visas, said Virginia Kice, a spokeswoman for the U.S. Bureau of Immigration and Customs Enforcement.
Settling in Fresno, Arthur's father, Ruben Mkoian (he and his son spell their last names slightly differently), worked as a truck driver. The teen's mother worked in a jewelry store, and the family set about living their lives, which soon included a younger brother for Arthur.
Mkoian believes that if they were to return to Armenia, his family would be subject to reprisals because of his attempts to expose corruption at the government agency where he worked.
After the family's visas expired, they applied for U.S. residency. That application was denied, Kice said.
Immigration wheels turns extremely slowly. An immigration judge finally ruled in 2002 that the family had no legal right to remain in America.
The family tried again by applying to the Board of Immigration Appeals; that was rejected, also. The 9th U.S. Circuit Court of Appeals last year denied their petition for a hearing.
"I would remind people that this family had ample access to due process," Kice said. "The case has been in litigation for more than 10 years. Immigration experts on every level determined that they had no legal basis to be in the United States."

This is nuts. Why even have these courts and judges if they take this long to make decisions like this? If they had nabbed them within a year or two of their arrival that would have been one thing. But 13 years later we are going to uproot them and send them packing after they have caused no problems and, in fact, are contributing positively to our society?

Fortunately, a bill sponsored by Sen. Dianne Feinstein could resolve things by granting the family citizenship.
This is the common sense thing to do in this case, but unfortunately common sense is something that is sorely lacking in many parts of our country.
I first learned of this case this morning by reading this dreadful column by Ruben Navarette who essentially applauds the decision to deport the kid and his family. Why? The law is the law, he states flatly. But the real reason is darker than that as he goes on to admit. It turns out that Navarette can recall a case a few years ago where a Hispanic kid may have been deported under similar circumstances, so now he thinks this kid is getting special treatment because he is not Hispanic (he is an Armenian.)
In other words, Navarette is being a racist jerk. The San Antonio Express-News should quit giving this jerk a forum and drop his syndicated column.
Posted by Mike Thomas at 6/11/2008 No comments:

The headline on the column catches your attention right away.
The Case Against John Lennon
And then there is the pull quote that highlights the column:

Nothing to live or die for — what a nightmare.

Well, yes, it IS wrong, because it is a misquote. Intentional or not, I’m not sure, but the actual lyrics from the song say “...nothing to KILL or die for....” Not nothing to live for.

So what is going on here? Why is the WSJ promoting a column with such a provacative title and using a misquote to mislead readers into a negative reaction against John Lennon?
The column itself is a mess. It is poorly written, jumbled and fails to adequately explain how John Lennon or his song “Imagine” has anything to do with what the column appears to be about.
Here is the pertinent section that mentions Lennon:

Mr. Sharansky has a new book, titled "Defending Identity." It would be equally accurate to call it "The Case Against John Lennon."
Or, more specifically, the case against "Imagine," Lennon's anthem to a world with "no countries . . . nothing to kill or die for/And no religion too." For Mr. Sharansky, a nine-year resident of the Perm 35 prison camp, that's a vision that smacks too much of the professed beliefs of the ex-Beatle's near namesake, Vladimir Ilyich.

What the hell? Does he think he’s being clever or something? Lennon sounds like Lenin. Get it? So obviously they must be related or they must think alike or something right?
Nevermind that “Lenin” was actually an alias for Vladimir Illich Ulyanov, while the surname Lennon dates back hundreds of years to old Ireland.
No, they sound alike so there must be a connection. Right? Kind of like how Obama sounds like Osama so they must be related too. Yeah. That’s the level of reasoning that the column sinks to.
Absolutely pathetic.
And of course he never goes back and explains how V.I. Lenin’s brutal and dictatorial ways have any similarity or correlation to Lennon’s ode to world peace.
But fortunately for the cretins who run the WSJ editorial pages, John Lennon is dead and can’t defend his classic work against their asinine columnist’s offhanded smear.
Posted by Mike Thomas at 6/10/2008 No comments:

Ever wonder why we don’t hear more about this lady? 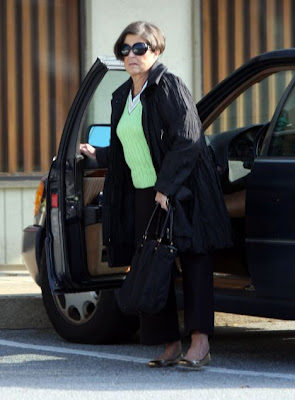 McCain likes to illustrate his moral fibre by referring to his five years as a prisoner-of-war in Vietnam. And to demonstrate his commitment to family values, the 71-year-old former US Navy pilot pays warm tribute to his beautiful blonde wife, Cindy, with whom he has four children.
But there is another Mrs McCain who casts a ghostly shadow over the Senator’s presidential campaign. She is seldom seen and rarely written about, despite being mother to McCain’s three eldest children.
And yet, had events turned out differently, it would be she, rather than Cindy, who would be vying to be First Lady. She is McCain’s first wife, Carol, who was a famous beauty and a successful swimwear model when they married in 1965.
She was the woman McCain dreamed of during his long incarceration and torture in Vietnam’s infamous ‘Hanoi Hilton’ prison and the woman who faithfully stayed at home looking after the children and waiting anxiously for news.
But when McCain returned to America in 1973 to a fanfare of publicity and a handshake from Richard Nixon, he discovered his wife had been disfigured in a terrible car crash three years earlier. Her car had skidded on icy roads into a telegraph pole on Christmas Eve, 1969. Her pelvis and one arm were shattered by the impact and she suffered massive internal injuries.
When Carol was discharged from hospital after six months of life-saving surgery, the prognosis was bleak. In order to save her legs, surgeons
had been forced to cut away huge sections of shattered bone, taking with it her tall, willowy figure. She was confined to a wheelchair and was forced to use a catheter.
Through sheer hard work, Carol learned to walk again. But when John McCain came home from Vietnam, she had gained a lot of weight and bore little resemblance to her old self.
Today, she stands at just 5ft4in and still walks awkwardly, with a pronounced limp. Her body is held together by screws and metal plates and, at 70, her face is worn by wrinkles that speak of decades of silent suffering.
For nearly 30 years, Carol has maintained a dignified silence about the accident, McCain and their divorce. But last week at the bungalow where she now lives at Virginia Beach, a faded seaside resort 200 miles south of Washington, she told The Mail on Sunday how McCain divorced her in 1980 and married Cindy, 18 years his junior and the heir to an Arizona brewing fortune, just one month later. 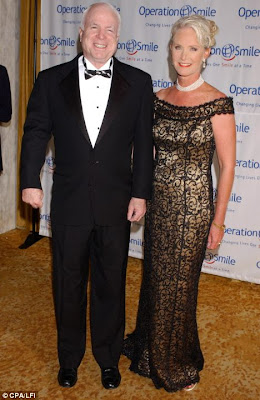 I think it is interesting that the key decision that launched McCain’s political career many years ago was to dump his first wife in favor of a wealthy, beautiful heiress whose money financed his first bid for Congress (as well as some significant support from Charles Keating.)
Posted by Mike Thomas at 6/10/2008 No comments:

I did not (say that)

Is this a gotcha moment?

Is he lying? Is he senile? Or is it all just a big misunderstanding?
Imagine if Barack Obama got caught denying that he said something in a speech he had given just a week before?
Would it be ignored? Or would it blow up into a huge scandal?
Does it really matter whether he said it or not? Before the age of Youtube would anybody have noticed or cared anyway?
Posted by Mike Thomas at 6/09/2008 No comments: