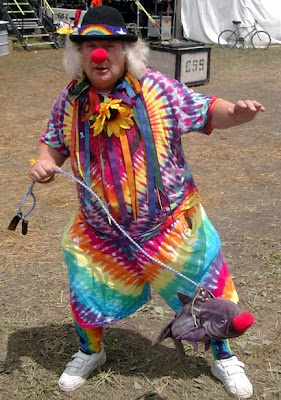 Rightwing nutjob and former actor Chuck Norris is now urging “Tea Party” radicals to quit flying the modern American flag in favor of older, “Betsy Ross-style” or “Don’t Tread On Me” flags as a protest statement against the American government.
Or, as an alternative, he suggests staining a modern U.S. flag with tea.
Seriously.
Do you suppose Norris was one of the folks who a few years ago was supporting criminal penalties for folks who burn or otherwise deface an American flag?
Nevermind.
The point is that this is another example of the complete radicalization of the rightwing conservative movement in this country. Today’s “teabaggers” are not much different from the radical hippies of the 1960s. Both had some unorthodox, and in some cases extreme, anti-government or anti-authoritarian views.
The teabaggers’ recent march on Washington looked like a Hippie protest put through an ideological mirror.
Imagine, for a minute, Glenn Beck, the self-described “rodeo clown” of the teabag movement, as a modern version of Wavy Gravy, the ‘60s era anti-war protester who discovered that by adopting a clown persona he was able to stay out of jail more often. Of course, Wavy Gravy was never given his own national TV and radio shows. And therein lies the real difference between these two groups.
One is serving the interests of the rich and powerful, and one did not. Can you guess which is which?
That’s right. The “Hippies” were NOT doing the things that the rich and powerful approved of so they were ignored, marginalized or vilified as needed.
Today’s radicals, however, ARE serving the interests of the rich and powerful, so they get lavished with lots of media attention and have their views broadcast all over the TV and radio everyday.
So we get to watch everyday as nutjobs like Chuck Norris, Glenn Beck, Michell Bachman and Sarah Palin parade around and “let their freak flag fly.”
Posted by Mike Thomas at 9/24/2009 No comments:

This column in the Sunday NYTimes is dead on comparing right-wing talkers with gangsta rappers.
Although each is appealing to a different audience, both forms of communication use very similar modes of operation and share similar ethics based on selfishness, greed, bombast, an overbearing sense of righteousness, resentment, paranoia and a victim mentality. And, of course, lots of raw hatred mixed in. They will even share similar targets for their hatred -- Women, gays, immigrants, authority figures, etc.

...rap is among the most conservative genres of pop music. It exalts capitalism and entrepreneurship with a brio that is typically considered Republican. (Admiring references to Bill Gates are common in hip-hop.)
Rappers tend to be fans of the Second Amendment, though they rarely frame their affection for guns in constitutional terms. And rap has an opinion about human nature that is deeply conservative — namely, that criminals cannot be reformed.

I would never have put these two together quite like this since I can't stand to listen to either one. But the similarities are striking as the article makes clear.
Posted by Mike Thomas at 9/21/2009 No comments: