A lack of empathy

There was an interesting piece in the NYTimes today on Harry Whittington giving the backstory on his long ties to the Texas Republican Party.
What caught my attention was this graph describing one of Whittington’s ‘passions’ “that do not fit so squarely with his image as a Republican elder” - prison reform.

While serving on the board of the Texas Department of Corrections in the 1980's and after observing the conditions in many state prisons, he once claimed, "Prisons are to crime what greenhouses are to plants." He also led an effort to move mentally retarded inmates out of the general prison population and followed this with outspoken support of a bill to ban execution of retarded prisoners. (Although Gov. Rick Perry vetoed that bill in 2001, the United States Supreme Court later outlawed such executions.)

"A person who is born with a body that becomes an adult and a mind that remains a child needs special protection in our criminal justice system," Mr. Whittington, one of whose four daughters is retarded, wrote in a letter to The Dallas Morning News in 2001.

Is it just me, or is the only time I see conservative Republicans taking a liberal position on something like this is when it affects them personally?

Dick Cheney, who has a daughter who is a lesbian, refuses to endorse Bush’s anti-gay marriage agenda. Ditto the late Barry Goldwater.

Nancy Reagan, whose late-husband suffered from Alzheimers, is an outspoken advocate for stem cell research.

Why can’t more people have empathy for others when it does not affect them personally?
Posted by Mike Thomas at 2/15/2006 No comments: 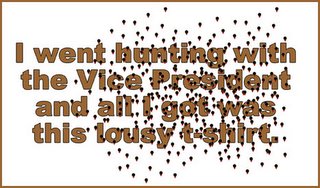 Thanks to The Agonist for the graphic.

Dick Cheney finally comes clean.
On the grounds that it’s always better late than never, Cheney can be commended for finally coming forward and taking full responsibility for shooting his hunting partner in the face last Saturday.
However, the lengthy delay in doing so has left a bitter public impression that he was hoping to avoid taking responsibility by having his spokespeople point the finger of blame back at Whittington. That was inexcusable and should never have been tolerated.
Posted by Mike Thomas at 2/15/2006 No comments:

There has been a lot of joking and a lot of ducking and covering over this Cheney shooting incident, but now it appears that it could all become very unfunny very quickly.

The 78-year-old lawyer who Vice President Cheney accidentally shot in a hunting accident suffered a minor heart attack this morning after a piece of birdshot moved and lodged in his heart, doctors said.

Doctors treating Harry Whittington said the Republican lawyer was moved back into the intensive care unit and will need to remain hospitalized for at least a week.

This can’t be good for a 78-year-old to have a lead pellet lodged in his heart. What happens if he dies? Is Cheney still “cleared” because of the non-investigation by the local sheriff’s office which didn’t find out about the accident for several hours afterwards and was not allowed to come out to the ranch and interview Cheney until the next day?

Also, is the vice president’s office paying for this guy’s hospital bills and rehab? Does Cheney have insurance for this kind of thing?
Posted by Mike Thomas at 2/14/2006 No comments:

This is so funny, it’s sad.

From The Daily Show:

“Rob Courdry: 'Jon, tonight the Vice President is standing by his decision to shoot Harry Whittington. Now according to the best intelligence available, there were quail hidden in the brush. Everyone believed at the time-there-were-quail in the brush. And while the quail turned out to be the 78 year old man. Even knowing that today, Mr. Cheney insists-he still would have shot Mr. Whittington in the face.”

Now I’m just waiting for Mr. Whittington, as a loyal Republican, to issue a statement accepting full responsibility for the accident and declaring that he was honored to have been shot in the face by Cheney.

Go here to see more coverage from last night's The Daily Show.
Posted by Mike Thomas at 2/14/2006 No comments:

I went to high school in a small town not too far from where this all happened. I know that hunting accidents like this are not uncommon. I even knew a kid in my high school class who was killed as a result of a hunting accident in the early 1980s.
What bugs me the most about this whole thing is the way the Vice President’s office has handled the aftermath. First, they didn’t bother to report it for 24 hours (shades of Chappaquiddick),...

The accident was not reported publicly by the vice president's office for nearly 24 hours, and then only after the Corpus Christi Caller-Times reported it Sunday.

... and then they left it all to the poor people who own the ranch to handle the torrent of media inquiries.

Katharine Armstrong, daughter of Republican Party stalwart Anne Armstrong, did her best to try and spin the story in a way that is favorable to the vice president, but ultimately I think she just made matters worse by making it appear that Cheney is trying to shirk responsiblity for the accident.

Whittington "came up from behind the vice president and the other hunter and didn't signal them or indicate to them or announce himself," said Armstrong.

Oh, so it’s Whittington’s fault that he got shot. I see.

"The vice president didn't see him," she said. "The covey flushed and the vice president picked out a bird and was following it and shot. And by god, Harry was in the line of fire and got peppered pretty good."

Let me just say that Cheney is damn lucky that he didn’t kill Whittington. We’re not talking about a BB gun here. This was a 28-gauge shotgun which can and does kill people at that distance. And he was damn careless to swing around and fire away without knowing where everybody in his hunting party was. So don’t try and blame Whittington for not jumping up and down and waving his arms. Cheney was the one with his finger on the trigger and he alone was responsible for that weapon when it was discharged.

I think fellow Texan Paul Begala sums things up nicely over at TPMCafe.
Posted by Mike Thomas at 2/13/2006 No comments: