Texas will lose clout in next Congress

From BOR I see that Texas will have no leadership positions in the next Congress thanks to Tom DeLay. That is assuming the Democrats retake control as looks increasingly likely.

If they succeed, no Texans are in line to be chairmen of House committees. DeLay helped send four of the state's most senior members packing when he orchestrated a wholesale redrawing of Texas' congressional districts in 2003.
...
But if they had remained in office and Democrats took control, Texas would have three committee chairmen.
Frost would become chairman of the Rules Committee, which decides which bills and amendments get a vote.
Former Rep. Charlie Stenholm would head up the Agriculture Committee. Jim Turner would lead the Homeland Security Committee, which oversees border enforcement agencies.

Gee, thanks, Tom!
As Karl says at BOR: "DeLay was never interested in doing what was best for Texas. It was all about power for himself and the Republican Party."
Posted by Mike Thomas at 10/21/2006 No comments:

We reluctantly recommend Republican incumbent Henry Bonilla, but encourage him to be more responsive to the needs of his district, including the San Antonio area.

Idiots!! There are several well qualified Democratic challengers in this race including former Congressman Ciro Rodriguez, businessman/rancher Lukin Gilliland and veteran firefighter Albert Uresti (also the brother of State Sen. Carlos Uresti.) So if they are disappointed with Bonilla, why not consider them? Here is their lame reasoning:

It's unfortunate that none of Bonilla's opponents exhibits the combination of leadership and preparedness necessary to replace him...

What the hell is that supposed to mean?!? Like Bonilla, a former TV newscaster, was so prepared to go to Congress when he was first elected. And Ciro has already been in Congress. As for leadership, Bonilla is not going to do a lot of that when the Republicans fall back into the minority as is almost assuredly going to happen this election.

But this endorsement fits with their policy which can be summed as such: Endorse every incumbent and/or Republican on the ballot. The sole exception was for one of the state Supreme Court races where they are backing Bill Moody against an unqualified Rick Perry appointee.

I'm really disgusted with the E-N editorial board. They are spineless on most issues and the few that they have stood up and taken a stand on are clearly undercut by their endorsements which scream out that they are perfectly happy with the status quo and want more of it.

I have no doubt that tomorrow they will endorse Rick Perry for governor. You can bank on it.
So much for the so-called liberal media.
Posted by Mike Thomas at 10/21/2006 No comments: 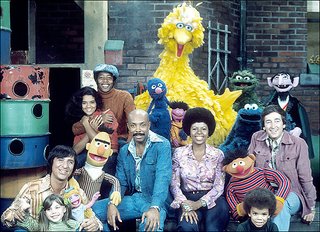 Those are the years when I was a kid watching Sesame Street. Classic!
Posted by Mike Thomas at 10/20/2006 No comments:

It has long frustrated me that so many reliably “Blue” states today have Republican governors. For instance, I don’t think you can come up with a grouping of more liberal states than this: Hawaii, Vermont, Rhode Island, New York, Massachussetts, Connecticut, Maryland, California, Minnesota. And what do all these states have in common? They all currently have Republican governors.
That is definitely going to change in a couple of weeks - in New York and Massachusetts for sure, and maybe in Maryland and Minnesota as well.
In recent years, though, Democrats have managed to make similar inroads on traditionally “Red” states. Here is a grouping of reliably red states that all voted for Bush and all of which currently have Democratic governors: Montana, Wyoming, Arizona, Kansas, Oklahoma, North Carolina, Tennessee, Virginia and Louisiana.

The upcoming mid-term elections are looking good for Democrats all around, but especially in the gubernatorial contests. Democrats seem to be on track to win governors races in Arkansas, Colorado, Massachusetts, Ohio, Maryland, Minnesota and New York. The WaPost columnist has already declared the New York race over saying “The fat lady has sung, showered and is currently sitting on her sofa watching "Desperate Housewives." State Attorney General Eliot Spitzer (D) will be New York's next governor.”
Democrats also seem certain to maintain governor’s seats in Wisconsin, Maine, Michigan, Iowa and Oregon.

And all of this leads to me current frustration, that being why Texas can’t be part of this partisan sea change that seems to be taking place. It’s almost like the Red tide that engulfed the country 12 years ago is finally receding, but is still drowning us here in Texas. Rick Perry is an exceedingly unpopular governor and by all rights should be shown the door by the electorate on Nov. 7. But instead it looks like he is about to two-step his way to an easy victory with less than 40 percent of the vote.
Maybe the sea change will finally catch up to the Lone Star state during the next election cycle, but it would sure be nice to see some evidence of the shift taking place here next month.
Posted by Mike Thomas at 10/20/2006 No comments:

In the middle of a rather lengthy thread over at All Things Conservative a comment was made that liberals don’t tolerate conservatives commenting on their blogs to the same degree that the reverse is true. My friend Mark Harden went so far as to make the following challenge:

I would like to issue a challenge to any liberal commentators here to identify and link to a left wing blog - other than Mike's - which displays the same sort of interactive debate with minimal abuse. I sure haven't seen one.

While I appreciate that I was singled out as the exception, I think there are any number of sites that are tolerant of diverse opinions on both sides of the spectrum. But rather than throwing out a long list of links, I would like to step back and look over my experience blogging these past four years.

My first blog post was made on Jan. 10, 2003, when absolutely no one else was reading this site besides myself. (Not that there are very many more people reading it today.) The first bloggers I came across were fellow liberals like the college activists at Burnt Orange Report, who were nice enough to link me up even though I am an Aggie, and Charles Kuffner of Off the Kuff who was then trying to make a comprehensive survey of the political blogging landscape in Texas.
But while BOR and Kuff are excellent sites and daily reads for me, I have to admit that commenting there was not very interesting since I agreed with most of what was being said.
More interesting, I thought, was to find people with different views who could challenge my perception of the world and who would be open to a debate. I was a debater in high school and always enjoyed the rigorous give-and-take that it entailed.
I was pleasantly surprised to find that not only were there a lot of conservatives out there, which I expected, but many were open to having intellectual discussions that did not devolve into name-calling and insults. I was also surprised to find that many of the conservative sites tended to be more apt to give me a reciprocal link which was very much appreciated in those early days.
Many of those sites are no longer around, unfortunately, including Mark’s InSane Antonio which he inexplicably shut down two years ago. Others that are now missing in action include Joe Kelley's The Sake Of Argument; BeldarBlog; Reductio Ad Absurdum; and Owen Courreges. I used to have lengthy debates with Owen over the Texas House Redistricting controversy. Today he is apparently working at a libertarian think tank and attending law school.

Some conservative blogs that are still around which are open to debate include my friend Rantin’ Raven’s The View From the Nest; Jimmy K.’s but that's just my opinion and my fellow Aggies who run the popular Boots & Sabers blog.
And, of course, there is Bill Crawford’s invaluable ATC.

One more that I should mention is Roscoe’s Excuse. I met Roscoe at the San Antonio Blogger BBQ last year that Ranting Raven organized. However, while I like to read his blog, I rarely comment there because as he aptly explains in his introduction to the site:

“This is not an "argument" blog nor is it a "debate" blog. Heck, it's not even a "discussion" blog. It's all about me, my views, attitudes, and opinions. Any comments left here that are overly critical of me, of my opinions, or of those I choose to embrace will simply be deleted. Get your own soap box to stand on if you want to, this one's mine.”

I’m not going to name names, but there have been some conservative blogs, local and statewide, that made it quite clear that my comments were not welcome and I have avoided them ever since.
Also, in some cases it took a little effort on my part before I felt welcome at some sites. In some cases, I was not recieved well at first until the blog site owner came to understand that I was not a “troll” coming to take potshots at them. Once they understood that I was respectful of their views, they were more willing to tolerate my dissenting opinions.
Posted by Mike Thomas at 10/19/2006 No comments:

Rolling Stone has an entertaining read this week on our current crop of Congress critters. They even put together a 10-worst list beginning with Speaker Denny Hastert, probably the most ineffective speaker since Democrat Thomas Foley (no relation to Republican Mark Foley).
Thomas Foley, of course, was the Washington Democrat who led the party into their version of Little Big Horn in 1994 when Newt Gingrich and his band of wild Indians slaughtered 54 of them and even walked away with Foley’s scalp.
But today, Hastert is leading a Congress that is even more unpopular than the Democrats were in 1994.
Republicans are counting on the inherent flaws in our democratic system to help them maintain power - the gerrymandered districts, the financial and logistical advantages incumbents have over their challengers, and so forth.
It could still work. The polls seemed to favor John Kerry in the 2004 presidential race and yet he still fell short on election day. Although, Ohio, the swing-state in that election, seems to have had a serious change of heart recently.
Posted by Mike Thomas at 10/18/2006 No comments: