I know Ann won't be happy but I fully support President Obama's position resisting a Congressional investigation of the Bush era torture policies.

Mr. Obama said a special inquiry would steal time and energy from his policy agenda, and could mushroom into a wider distraction looking back at the Bush years...

That is exactly right. I know that President Obama can walk and chew gum at the same time, but the problem is that the rest of the country can't. And to accomplish the gargantuan task of repairing the damage to our economy from the gross negligence and mismanagement of the Bush years will require the full support and attention of the country.
Paul Krugman argues today that we must procede with a full-scale investigation now in order to "reclaim America's soul."
Now, I love Krugman and I generally agree with him on most things. But this is a case where we can see the divide between liberal idealism (Krugman) and liberal pragmatism (Obama).
Krugman says that


America is more than a collection of policies. We are, or at least we used to be, a nation of moral ideals. In the past, our government has sometimes done an imperfect job of upholding those ideals. But never before have our leaders so utterly betrayed everything our nation stands for.

Well, that's a nice sentiment and all, but the reality is that we are NOT "a nation of moral ideals," we are a nation of people all with our own flaws and shortcomings and all more intent on taking care of our day-to-day needs than worrying about upholding moral ideals. I can tell you right now that if I lose my job and am forced to give up the house where I intend to raise my children, I'm not going to give a damn whether Dick Cheney and his cronies spend any time in jail or not.
I think Obama understands this. He does not want his agenda to get bogged down in a long slog through the past sins of the Bush administration. That doesn't mean that we just forget about it and push it all under the rug, but this is not the time to be pushing all of this stuff up to the front burner.
The USS Titanic just hit an iceberg and it's time to have all hands on deck and find some way to salvage the situation. It's not time to start a tribunal to prosecute the guys who ran us into the iceberg.
Sen. Harry Reid is right that we should just let the process play itself out for now and not rush things.

The Senate majority leader, Harry Reid of Nevada, and other top Senate Democrats endorsed Mr. Obama’s view on Thursday, telling reporters at a news conference at the Capitol that they preferred to wait for the results of an investigation by the Senate Intelligence Committee expected late this year...

Just remember that the people who ran this torture regime are now out of power. And the best thing we can do now is to make sure that they stay out of power for the indefinite future. The way to do that is to demonstrate to the American people that the current administration's policies will work to pull us out of this mess. Otherwise, I'm afraid that a slim majority of people could be persuaded to put them back into office again and then before you know it we will be back where we started.

I agree that we need to regain America's soul, but we don't do that through retribution. We do it by pursuing the right course and demonstrating once again that it is the best path.
Posted by Mike Thomas at 4/24/2009 No comments:

A new poll just out confirms that half of all Texas Republicans are dumber than rocks.

Forty-eight percent of (Texas) Republicans said they favor secession, the same percentage that said they didn’t in a Research 2000/DailyKos poll released Thursday.

How incredibly embarrassing.
Posted by Mike Thomas at 4/23/2009 No comments: 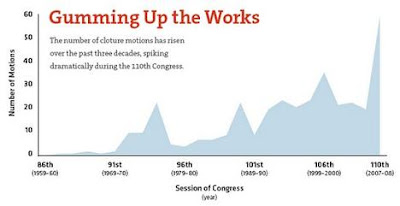 Republicans have not been shy about using the filibuster to derail legislation that they can’t defeat on a majority vote. The filibuster is an arcane Senate rule that has been abused in recent years to enforce a 60-vote supermajority on almost everything. The only way to avoid this abuse is to consider the legislation under rules known as reconciliation. This is not an uncommon practice as noted here, and has been used many times in past by Republicans - most recently to pass Bush’s tax cuts for the rich.
So, if Republicans can use reconciliation to screw up the economy, Democrats should be able to use it to put things right again. I think it is imperative that Obama get his agenda through Congress (assuming that it has majority support) and not allow it to be derailed by Republicans who are presently pulling out all the stops to keep Al Franken from taking his Senate Seat just so they can deny Democrats what may be a crucial vote needed to override a Republican filibuster.
The economic crisis facing the nation today is too critical to allow political gamesmanship to override the will of the electorate. The public voted in November. As Republicans were fond of saying back when they used to win elections - “Elections have consequences.”
They can squeal and protest and wave teabags all they want, but Democrats and the Obama administration need to stay focused on cleaning up the mess and putting the country back on the right track or else, God forbid, the Republicans may get back in there again and screw things up even worse, if that is even possible.
Posted by Mike Thomas at 4/23/2009 No comments:

OK, I finally took the leap onto Twitter. You can find all my Twittering here.
Up until now I had resisted jumping into Twitter on account of the fact that I don’t own a cell phone and I had assumed until just recently that it was only for people texting one another on their cell phones.
But it seems that it encompasses the Web as well so even Luddites like me can join in the fun. I don’t know that I will have much to Twitter about myself or if I will just use it to follow other Twits. But it was fun setting it up and finding my initial group of Twits to follow. For some reason the site won’t take any of the photos I’ve tried to upload so I remain faceless in the Twitosphere for now.
So for anyone else out there still resisting the temptation to Twitter, I can now say ‘Come on in, the water’s fine!’
Posted by Mike Thomas at 4/22/2009 No comments: