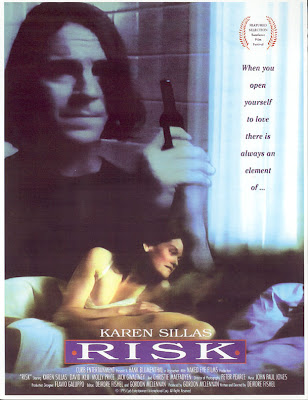 When I was working as a reporter for a chain of weekly newspapers in Connecticut in the early 1990s, I had the opportunity to write many interesting stories. One that I recently dug out of my files that was published in the April 23, 1992 edition of the Durham Gazette was about a New York film crew that came to Middlefield, Conn. to do some on-location filming for an independent feature-length movie.
It was a low-budget production (about $200,000) and involved mostly no-name actors and a writer/director fresh out of film school by the name of Deirdre Fishel. The working title of the film was “Maya” and I was told that it was the story of a young woman whose life and career had stalled until she met a charming vagabond named Joe on a New York subway. He convinced her to escape with him to the country. Thus the need for on-location filming at Happy Acres Resort, a small collection of rental cabins in a remote, wooded area outside of the small community of Middlefield (near Durham).
My story focused mainly on the “gypsy” lifestyle of the film crew and their reaction to the scenic and rustic environment of rural Connecticut compared to New York City. I talked with the associate producer who had scouted the location and several low-level crew members including a “2nd electric” and a “2nd grip.”
It was raining and sleeting for much of the time that the film crew was in town and they did a lot of the filming inside the cabins while the crewmembers huddled under the eaves trying to stay warm and dry.
I never knew what happened with the movie after they left. I kind of assumed that it did not get a theatrical release. But recently I decided to dig up the old story and using the magic of the Internet I discovered that I was wrong. The film actually did get a theatrical release in 1994 under the name “Risk.” It was entered into the Sundance Film Festival and even got a somewhat decent review in the New York Times (Oct. 5, 1994).
What kind of shocked me, however, was that the film is described as an “erotic thriller.” So that’s what they were doing in the cabins with the windows all covered with blankets! I should have known. The associate producer told me at the time that “We needed someplace that was isolated so we can do our work undisturbed and also so we won’t bother others.”
OK, then.
The film is described on the web today as “a powerful drama about an artist who enters into a turbulent love affair with a troubled and unpredictable young man.” The cover of the video on Amazon is a bit too risque for me to post on my blog.
The star of the film, Karen Sillas, went on to do a few more low-budget movies before getting her “big break” in television. She has since appeared in a number of popular TV series in bit roles including CSI, The Sopranos, and a recurring role in the TNT crime drama “Wanted”. The director went on to do several documentary films and then joined the faculty at the New School University in New York.
Posted by Mike Thomas at 6/10/2010 No comments: