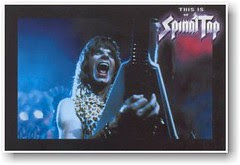 Nigel Tufnel
Originally uploaded by mwthomas87.
I’ve picked up the gauntlet that has been thrown down over at All Things Conservative. I’ve been having a lengthy and spirited debate (scroll down to comments) with Nigel Tufnel, the lead guitarist for Spinal Tap, over whether Valerie Plame Wilson was a covert agent with the CIA at the time that she was outed by high-level officials in the Bush administration.
I outlined my argument here, and Nigel has challenged my logic as being faulty. We have been going round and round for a couple of days and now he has offered the following challenge:

Here's a deal -- and Bill can vouch for my trustworthiness.

If Rove is indicted and convicted of a crime related to the Intelligence Identities Protection Act, I will author a post on Rhetoric & Rhythm fully conceding my erroneous understanding of the act and of Rove's crime and fully acknlowledging your brilliant analysis.

If Rove is indicted but not convicted of a crime related to the Intelligence Identities Protection Act, indicted for any lesser charge (to include obstruction of justice, of which he may very well be guilty), or not indicted for anything at all, you will author a reciprocal post on ATC acknowleding your erroneous understanding of the act and of Rove's non-crime and fully acknlowledging Bill's brilliant analysis.

I have accepted his challenge with certain provisions. I think it is possible that Rove could escape indictment and/or conviction without disproving that Plame was covert. So I offered this amended challenge on my part:

Let's say that if Rove is not indicted, or is indicted but not convicted of a crime related to the Intelligence Identities Protection Act because it is determined that Valerie Plame was not considered covert under the law, then I will author a mea culpa piece for ATC.
Or regardless of what happens to Rove, if it is determined through the course of the investigation that Plame was not a covert agent under the law, I would concede and admit that I was wrong.

We are still haggling over the details. Nigel thinks I’ve given myself too much wiggle room, but I’m willing to accept whatever determination the special prosecutor and the grand jury make regarding Plame’s covert status.

Needless to say, I am basing my position on my own non-lawyerly interpretation of the government statute that defines what a covert agent is. But I am also confident in that my position is supported by a lot of former intelligence agents who should know better than most.
Posted by Mike Thomas at 7/22/2005 No comments:

Unless somebody turns up a photo of John Roberts dressed in women’s lingerie and spike heels while being spanked by his dominatrix, it is highly unlikely that his confirmation to the Supreme Court will see much turbulence.
While I imagine there will be a large number of Democrats who will vote against Roberts on principle, I think they are not likely to launch a filibuster unless something very sinister suddenly turns up to tarnish Roberts’ squeaky clean image.
Earlier I had advised Bush to pick a conservative out of the 90 percent pool of acceptable nominees and not the 10 percent of far-right nutjobs who would be sure to spark a confirmation fight. Now it seems as if Bush took this advice - sort of - and went with the most extreme conservative he could find in that 90 percent segment. Roberts may be the most conservative jurist who did not prompt a filibuster fight with Democrats.
I think it is interesting that Bush decided to break precedent by not choosing a woman to replace Sandra Day O’Connor on the high court. When Thurgood Marshall, the first black jurist, retired, Bush Sr. opted to replace him with another black judge, although his ideological opposite. But Bush Jr. decided not to replace the first female jurist with another woman leaving Ruth Bader Ginsburg as the only female on the nine-member court. That could change, of course, if William Rehnquist still steps down later this summer as expected.
There is still much to be learned about John Roberts and initial opinions will likely change, but right now it looks as if Bush made a safe choice by picking the most conservative person he could find who would not spark an all-out confirmation battle.
Posted by Mike Thomas at 7/20/2005 No comments:

Now that we know who Bush's nominee is for the Supreme Court it is time to start asking the important questions.

Has he ever smoked marijuana?
Did he pay Social Security taxes for his nanny and his housekeeper? What about the gardener and the pool boy's immigration status?
Did he ever dodge the draft?
Has he ever cheated on his wife or been otherwise unfaithful in his marriage?
Did he ever sexually harass a female subordinate?
Has he ever bounced a check or failed to pay his taxes on time.

These and other important questions will have to be addressed before we can be sure that this is the right person to fill lifetime appointment on the highest court in the land.
Posted by Mike Thomas at 7/19/2005 No comments: 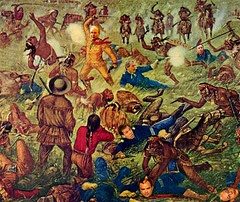 Rove's Last Stand
Originally uploaded by mwthomas87.
This is courtesy of Billmon

Too funny.
But reinforcements may be on the way! Is that a Supreme Court nominee coming over the horizon just in time to distract the ravaging hordes?
Posted by Mike Thomas at 7/19/2005 No comments:

For the first time it looks like the government may be about to own up to the fact that a man was executed for a crime he did not commit.

... 25 years ago ... a 19-year-old drug dealer named Quintin Moss was gunned down from a slow-moving car... And the man convicted of the killing, Larry Griffin, was executed 10 years ago.
Yet the city's top prosecutor has decided to re-investigate the murder as if it just happened, out of new concerns that the wrong man may have been put to death for the crime.
...
should Ms. Joyce, the St. Louis circuit attorney, demonstrate Mr. Griffin was not the killer, as the report and even some members of the victim's family contend, it would be the first proven execution of an innocent person, so far as death penalty advocates or opponents can recall.

This would be a significant step in the debate over capital punishment. It is surely not the first time that an innocent person has been executed by our justice system, but it would be the first time that such an outcome has been officially acknowledged.
Still, it is important to remember that for true opponents of the death penalty the killing of innocents is only part of the problem. The death penalty is wrong even when its target is definitely guilty of the crime. Jesus did not insist on seeing proof that Mary Magdalene was innocent of the prostitution charges levied against her before he challenged the mob to let someone without sin cast the first stone.
Posted by Mike Thomas at 7/19/2005 No comments:

Once a covert operative...

One of the lamest, but apparently popular, defenses of Karl Rove being bandied about by Bush apologists lately is that there could not have been a crime committed in this case because they claim that Valerie Wilson was not a covert operative at the time that her name was leaked to the media. In fact, they go on, she had not been working overseas for more than five years by that point and therefore no longer met the definition of a covert agent. To bolster this claim they point to this definition of a covert agent in the National Security Act of 1947:

The term “covert agent” means—
(A) a present or retired officer or employee of an intelligence agency or a present or retired member of the Armed Forces assigned to duty with an intelligence agency—
(i) whose identity as such an officer, employee, or member is classified information, and
(ii) who is serving outside the United States or has within the last five years served outside the United States...

I want to call your attention to the comma in the above sentence that immediately precedes the ‘and’ in the (i) sub-definition. By placing the comma there it means the next portion of the sentence is a separate thought and is not needed to understand the meaning of the preceding portion of the sentence. But conservatives reading this definition have conveniently ignored the comma and treat the ‘and’ as meaning that the two segments must be combined to complete the meaning.

This is crucial because with the comma the definition is more inclusive and has a broader scope of what a covert agent is - including agents whose identity is classified as well as agents who works overseas now or in the past five years. Without the comma the definition can be read more exclusively to limit it to agents who meet both criteria - their identiy is classifed AND they must have worked overseas in the past five years.

Now this latter definition is not only incorrect, but would also be detrimental to our nation’s intelligence gathering capabilities. Imagine a rule that says after five years of inactivity information on our covert intelligence agents is suddenly part of the open record and “fair game” for anyone who wants to disseminate it in the mass media. The people who are positing this interpretation are either not thinking it through clearly (and to be charitable that is what I assume for most of them) or they are complete idiots.

So let’s stop and think about this a little bit more. If we really had such a thing as a five-year statute of limitations on protecting our covert agents and it could be clearly demonstrated that Valerie Wilson has not been actively working overseas for at least five years, then it would seem to be an open and shut case. So please explain why the Justice Department has spent the better part of two years and millions of taxpayer dollars pursuing this case. Because if that is the case then the only real scandal is why the special prosecutor is wasting our time and resources (not to mention throwing journalists in jail).

The truth of the matter is that Valerie Wilson was a covert agent at one time as this article makes clear:

The investigation was triggered when CIA lawyers asked the Justice Department to look into who revealed the identity of Wilson’s wife, who worked overseas under deep cover posing as a private industry energy analyst.

And the fact that she recently took time off to raise a family and had not been overseas in the past five years (assuming that is the case) is beside the point.
Plus, it is also highly likely that she was able to continue working as a covert agent while stateside by keeping in contact with her foreign sources via telephone and e-mail.

But all of that is now lost thanks to loose-lipped Karl Rove. Once he decided to fire up his signature smear operation against Ambassador Joseph Wilson he wasn’t about to let a little thing like our nation’s national security interests get in the way of his scoring political points against a critic of the administration.
Posted by Mike Thomas at 7/18/2005 No comments: