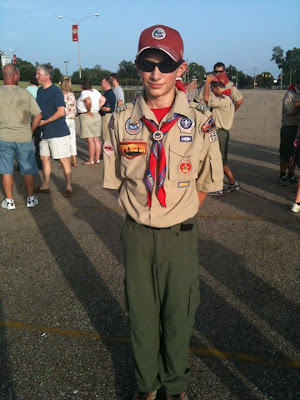 My nephew Zach Wright of Crowley, La. is attending the Boy Scout National Jamboree outside of Washington, D.C.
Following is his first dispatch sent to his hometown newspaper.

Hello, my name is Zach Wright and I’m attending the Boy Scout National Jamboree. I’m a 14 year old freshman at Notre Dame High in Crowley, LA. I am the senior patrol leader in Troop 70 in Crowley. We are sponsored by the United Methodist Men of the First United Methodist Church of Crowley. With me is Eagle Scout Steven Dial, a senior at Crowley High and fellow troop member. For the Jamboree we are in troops representing the Evangeline Area Boy Scout Council. Altogether there are about 70 Scouters from our council and 45,000 Scouters at the jamboree.
The 2010 Boy Scout Jamboree occurs about every four years, so it has taken lots of planning.
The staff here is nice, and everything is going smoothly. There are 21 subcamps divided into four geographical regions of the U.S. Each subcamp has troops from various councils and each troop is divided into patrols. We’ve built a huge tent city with many campers. Fortunately our tents are big enough so that we could get two cots inside. Our lunches are provided as a bag lunch we can eat on the run, but our breakfast and dinners are cooked in the campsite by each patrol. We’re all eating the same menu, and the Jamboree staff distributes the food supplies. So far the best meal has been the July 28th. dinner of jambalaya.
Just like the staff has been planning and training for four years for this event, the scouts have spent months planning, preparing and training. We all took Emergency Preparedness Merit Badge and first aid lessons. While here we will attend a CPR/EAD training course and hope to set a world record for the largest ever held.
The variety of Scouts here is amazing. I’ve meet scouts from Japan, Canada, Egypt, Barbados, Sweden, Great Britain, South Korea and some Scouts from a little island in the Caribbean Sea near the coast of Venezuela. We’ve encouraged to mingle with the aid of a jamboree wide game of trading cards.
We each have a deck of 21 cards representing our subcamp. The idea is too meet and trade cards with a Scout from each subcamp. By the end of the Jamboree we should have a card from each subcamp. So far I have 6 out of the 20 other subcamps.
I’m also trading patches with other Scouts. Friends and family members have been collecting council strip patches from out of state for me for a year, so I have a head start on that collection, but I’ve added lots more!!!
While at jamboree, Scouts are trying to earn five rockers that will ever after be worn on their uniform around a National Jamboree patch. These rockers represent effort in core value areas of Scouting, and several requirements must be met in each area to earn a rocker.
The first rocker is for a 5k run/walk which was scheduled on the 30th. of July.
The second rocker is Duty to God. We’ve been leading grace at meals and sharing Scout devotionals in our patrols every evening. Attendance at a religious service, meeting our subcamp chaplin and visiting the exhibit table of our denomination are also required.
The third rocker is for participating in the outback centers. This area includes lots of fun aquatic activities like fishing, snorkeling, scuba diving, canoe races, kayak races and rafting. My favorite will be scuba because I have not been able to go to any of them yet, but I cannot wait.
The fourth rocker is for participating in the activities centers. These include a merit badge midway where professionals lead Scouts in earning any merit badge available. I’ve earned engineering, and I’ve seen a promotion for a merit badge called robotics (which I loved), but for now I am not working on any merit badges.
Other activity areas include an American Indian village display that is run by the Order of the Arrow (the Boy Scout honor society).
I can’t wait to see the pow wow dances. I’ve heard they’re amazing. There’s also a replica of the Brown Sea Island, the first Scout camp held in England by Lord Baden-Powel, founder of scouting. Scouts from Canada and Britain are running that display area.
The final rocker is for participating in the action centers. This area hosts friendly Scout competition in new areas for me including mountain boarding, trapshooting, muzzle-loaded gun shooting and a bikathlon – mountain biking and air rifle shooting.
Every evening there are area shows. So far we have seen the author of the book series “Eragon”. Tuesday, July 27th. many musical groups performed, but my favorite was a Trinidad and Tobago group. Wednesday, July 28th. another author talked to us about his “Alchemyst” series (which I started reading that night). Until next time from the Hill, Good bye.