I've never paid much attention to the NBA Draft before. I watched it a little closer this year because I'm still all buzzed about the Spurs winning their fourth championship and because I had the odd happenstance of running into Greg Oden in a McDonalds here in San Antonio during the NCAA Playoffs.
It will be interesting to see if Oden's star rises in the NBA or if he will be overshadowed by Kevin Durant or some other player who went lower down in the draft.
Looking back on the draft history going back to 1960 I can pick out about a dozen No. 1 picks who went on to become certified superstars:
1960: Oscar Robertson
1969: Lew Alcindor (Kareem Abdul Jabar)
1974: Bill Walton
1979: Earvin (Magic) Johnson
1984: Akeem Olajuwon
1985: Patrick Ewing
1987: David Robinson
1992: Shaqille O'Neal
1996: Allen Iverson
1997: Tim Duncan
2002: Yao Ming
2003: LeBron James

There have been many examples over the years of superstar players who weren't the top picks in the draft. Looking back now with perfect hindsight the teams that passed on these players look pretty foolish:

1984 was an especially intersting year for the draft. Some have called the greatest draft year in NBA history. That was the year that Michael Jordan, arguably the greatest player to ever step on the court, entered the draft. And he went at No. 3.
Nobody can really blame the Houston Rockets for selecting Akeem Olajuwon with their No. 1 pick that year. Olajuwon went on to be one the greatest basketball players of all time (if not THE greatest) and led the Rockets to back-to-back championship titles. But the Portland Trailblazers have to still be kicking themselves for taking Sam Bowie as the No. 2 pick that year and leaving Jordan to go to the Chicago Bulls.
1984 was also the year that Charles Barkley was drafted (No. 5) and John Stockton (No. 16).
Posted by Mike Thomas at 6/29/2007 No comments: 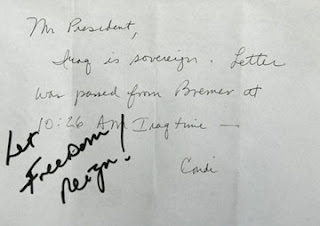 It’s hard to believe that this little farce was played out three years ago.

Three years ago today, the U.S. officially transfered sovereignty to Iraq in a “secretive ceremony” that was moved up two days “to thwart insurgents’ attempts at undermining the transfer.”
Bush was passed a note from National Security Adviser Condoleezza Rice that put it this way: “Mr. President, Iraq is sovereign.”
Bush wrote “Let freedom reign!” on the note and passed it back...

Fred Thompson, a likely Republican presidential candidate, on Tuesday defended his work as a Washington lobbyist, telling The Associated Press that lobbying is an important part of life because "government's got their hands in everything."
The actor and former U.S. senator from Tennessee added, "Nobody yet has pointed out any of my clients that didn't deserve representation."
Thompson, who likes to cast himself as a political outsider, earned more than $1 million lobbying the federal government for more than 20 years. He lobbied for a savings-and-loan deregulation bill that helped hasten the industry's collapse and a failed nuclear energy project that cost taxpayers more than a billion dollars.

Good thing for Thompson that he has an R after his name. If he were a Democrat this would be enough for the rightwing media to bury him under tons of negative coverage.
Posted by Mike Thomas at 6/27/2007 No comments:

Why Congress can't get anything done

Republicans are back in the minority and naturally that means they are back to their obstructionist ways.

Senate conservatives in the 110th Congress are obstructing and blocking legislation at a rate more than double that of the past two Congresses combined.
During the first six months of the current Congress, there have been 13 cloture votes on motions to proceed — “each one wasting days of Senate time.” In comparison, there were just four cloture votes on motions to proceed during the the first sessions of the 108th and 109th Congresses combined.
The result: The House of Representatives has passed 239 pieces of legislation during the 110th Congress yet few have made it through the Senate, with conservatives “objecting to just about every major piece of legislation” that Majority Leader Harry Reid (D-NV) has tried to bring up.

In April, Senate Minority Whip Trent Lott (R-MS) acknowledged, “The strategy of being obstructionist can work or fail… so far it’s working for us.” It just isn’t working for the American people.

Young Americans are more likely than the general public to favor a government-run universal health care insurance system, an open-door policy on immigration and the legalization of gay marriage, according to a New York Times/CBS News/MTV poll....
More than half of Americans ages 17 to 29 — 54 percent — say they intend to vote for a Democrat for president in 2008. They share with the public at large a negative view of President Bush, who has a 28 percent approval rating with this group, and of the Republican Party. They hold a markedly more positive view of Democrats than they do of Republicans.

Actually, it’s not just young people who hold these views. I think most Americans across the spectrum favor these issues. It’s just the decent thing to do — provide a minimum level of health care for those who can’t afford any better; treat the millions of illegal immigrants who are already here and aren’t going to leave like human beings; and allow consenting adults who love one another to get married and keep your nose out of their business. It’s pretty simple. It is only when the right wing noise machine cranks up and begins spewing its paranoid, hateful propaganda in an effort to scare people into opposing these common sense positions that everything gets gummed up.

Last week the Wall Street Journal/NBC News poll showed 52 percent of respondents saying they want Democrats to win the presidency in 2008 while only 31 percent favored Republicans.
That poll also showed Hillary Clinton extending her lead for the Democratic nomination while Barack Obama and John Edwards are both falling back.
Meanwhile, a recent CNN poll shows an overwhelming 67 percent of Americans are now opposed to the war in Iraq and 63 percent want to begin withdrawing troops immediately.
Posted by Mike Thomas at 6/27/2007 No comments:

Did you know that an MSNBC investigative study found 144 political donations by newsroom employees between 2004 and today? And of those 144 donations, an overwhelming number went to Democrats?!? Wow!!! Proof positive that the media has a liberal bias!!!
Yeah, right.
That is 144 donations out of more than 100,000 newsroom employees across the nation. Less than 2/10ths of 1 percent.
Furthermore, it proves nothing that someone may have voted Democratic or contributed to a Democratic candidate or cause as concerns their actual news reporting (assuming they do news reporting - most newsroom employees have nothing to do with political coverage).
What this bogus “study” tells us is that they are desperate to prop up the myth of a liberal media in the face of the overwhelming takeover of public discourse by the right-wing noise machine. The Op-Ed pages and the TV opinion shows are already chock full of conservative wingnuts. They would be happy to throw bricks at liberals on TV, but, other than Keith Olbermann, there are none. They are left trying to invent liberal bias out of the straightforward news coverage, most of which is rigidly centrist and objective to a fault. So rather than trying to demonstrate actual bias in news reporting, they try to infer bias by showing that reporters tend to vote Democratic or donate predominantly to liberal causes. But even in that effort they come up short, as the pathetic excuse of a study by MSNBC so aptly illlustrates.

Robert Parry has a good synopsis exposing the myth of the liberal media. I want to highlight this one part where he talks about the exact thing that the MSNBC study purports to do:

Another way to illustrate the fallacy of the “liberal media” argument is to hypothesize that a survey of editorial workers at, say, Murdoch’s New York Post would find that most editorial employees voted Democratic – not an unreasonable assumption for professionals living in New York City – and a minority voted Republican.
Under the logic of using how journalists voted to determine the bias of the company where they work, such a survey would “prove” that the New York Post was a liberal newspaper dominated by pro-Democratic articles. But it’s a decidedly conservative newspaper bristling with pro-Republican commentary.
The reason is simple: the woman writing obits or the guy doing the copy editing or the reporter covering the police beat – the working stiffs who may have voted Democratic – have only marginal influence over the newspaper’s slant. The content – and especially editorial opinions – are determined in the corporate offices by top editors and executives who report back to Murdoch.

I’ve worked in the news business for nearly 20 years in both the liberal Northeast and in the most conservative parts of Texas. I would describe most of my fellow newsroom workers during that period as leaning left, but mostly apolitical. Furthermore, those who were liberal were intimidated by the constant condemnations of the media by right-wing harrassment groups - even in the Northeast. If you were too conservative in your reporting, you were safe. If you were too “liberal” you were risking your job.
There were also plenty of “conservatives” in the newsrooms where I worked. One guy I worked with was an exceptional reporter who gave no indication of his political views. But after I got to know him I learned that he was very conservative (religious right). We became good friends and would debate politics quite often. Then one day an editorial writing position opened at the paper and we both applied for it. I’ll give you one guess as to who got tapped for the job.
That was in Lubbock, by the way. I guess I should not have harbored any illusions that they would allow a liberal to join their editorial board. Nevertheless, my friend was an excellent choice for the position as well, although it added absolutely no ideological diversity to the paper’s opinion section.

Most people who buy into this liberal media myth don’t have the foggiest clue as to how news organizations work. There is a bias to the news media, but it is not based on ideology. It is based on money. The Paris Hilton coverage is a fine example of this. We are getting this endless dreck on Paris Hilton because it sells advertising. That’s what it is all about.
Posted by Mike Thomas at 6/26/2007 No comments:

Matthew Yglesias surprised me with this analogy. In a post critical of Barack Obama for a position he took on liquified coal, Yglesias says “Obama may be like LeBron (James) but Hillary Clinton is like the Spurs.”
Wow!
But it kind of makes sense. While I like Obama and would not hesitate to support him for president if he won the Democratic primary, I still see him as being too inexperienced to best the more seasoned Hillary Clinton team. Obama may have the star power right now, but Hillary has that core competency thing going and knows how to play the game well on all levels.
Posted by Mike Thomas at 6/25/2007 No comments: