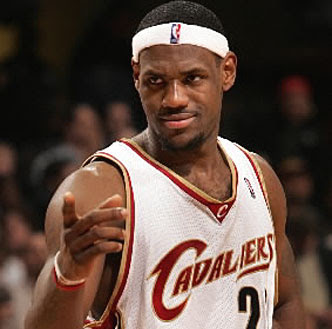 LeBron James' cowardly decision to turn tail and run out of Cleveland should make it clear to everyone that he is not and never will be as good as Michael Jordan or dozens of other past NBA stars as well.
What James is telling us by going to Miami is that he doesn't think he is good enough to win a title by himself and needs to stand on the shoulders of Dwayne Wade and Chris Bosh.
While I'm sure the decision will make lots of people in Florida happy, I think it has seriously tarnished LeBron's national reputation. He can't even use the excuse of money because he would have been paid more - $30 million more - to stay in Cleveland. But that would have also required him to do more work and take on more responsibility for pulling a team together that can win a championship. When that didn't happen this year, LeBron gave up. Now, he will have no excuses, but likewise he will receive a lot less credit if his new superstar team fails to meet gargantuan expectations.
I know that I, for one, will be rooting for LeBron and the Miami Heat to fall flat on their asses. I now have a team that I can dislike even more than the Lakers.
Maybe now the sports world will start to give more credit to Tim Duncan, who quietly and efficiently led his team to four championships without the spectacle of needing to bring in two other top-tier draft picks.
Posted by Mike Thomas at 7/09/2010 No comments: