I Miss My MTV

MTV officially turned 25 years old the other day, but you wouldn’t know it from watching the channel. That is apparently a closely held secret at the network which doesn’t want its target audience of adolescents to know that it was around long before most of them were born.
I was part of MTV’s target audience back when it first came out in 1981. I was turning 16 that summer and my family had just hooked up to cable TV for the first time. I had a little black and white television in my room that was permanently tuned to MTV throughout my latter high school years and I absorbed as many videos as I could.
I still remember coming home from school one evening shortly after our cable was hooked up and having one of my friends call to excitedly tell me that one of the Go-Gos videos was on.
Interestingly enough, back when it was getting started, MTV was relatively commercial free. I naively thought this was because we paid for cable and therefore didn’t have to watch commercials. Now I realize it was more likely due to the fact that the fledgling channel had not lured advertisers away from the big three networks at that early stage. But very soon I noticed that they would have the video jockeys or VJs hawking Snickers bars in between videos and before long there were just as many ads on cable as anywhere else.
MTV had a huge impact on my musical tastes during that time. I became a huge fan of The Police largely because of the video for “Every Little Thing She Does Is Magic.” Other favorites included Cheap Trick, the Go-Gos, J. Geils Band, Loverboy, Asia, Joan Jett, John Cougar (Mellencamp) and Rick Springfield. I also became very familiar with many other groups that I otherwise would probably never have been exposed to such as Adam Ant, Duran Duran, Madness, Men at Work, The Pretenders, Flock of Seagulls, Squeeze and many others.
When I went off to college in the Fall of ‘83 I missed out on the next couple years worth of MTV since freshmen and sophomores in the Corps of Cadets at Texas A&M were not allowed to have televisions in their rooms. By the time I got a TV in my junior year, MTV had changed significantly. All the original VJs I was familiar with were gone and they were busy phasing out the whole VJ format. Furthermore, the random and unstructured stringing of videos together that had at first seemed so novel and fresh was now being replaced with niche blocks of video programming with a heavy concentration on rap, heavy metal and alternative music, none of which particularly appealed to me at the time.
So my MTV viewing became much less frequent and by the time they introduced Beavis and Butthead as a regular feature on the network, I was about through with it. I had no interest in the reality programs that they pioneered or the inane Spring Break programming that would last all summer. I feel very fortunate that I totally missed out on seeing the Jackass series (which later became a movie that I have avoided seeing even though Richard Roeper of Ebert and Roeper fame gave it “thumbs up” the same year that he gave Lord of the Rings a thumbs down - Moron!).
Now, even the alternative VH-1 channel rarely shows videos. I feel disconnected from the current music scene because I don’t get to see the videos and can’t even find radio stations that will play current day music most of the time.
So I guess I am just too old now because I find MTV to be unwatchable. Thus I can understand why MTV would avoid celebrating its 25th anniversary. Because the folks like me who would care about it have pretty much the opinion best articulated by Beavis and Butthead: MTV Sucks.
Posted by Mike Thomas at 8/02/2006 No comments:

It is good to see that there are still some Republicans who do have a conscience.

Urging President Bush to turn all U.S. efforts toward "ending this madness," a leading Republican senator Monday broke with the Bush administration and called for an immediate cease-fire in the Mideast.
"The sickening slaughter on both sides must end and it must end now," Nebraska Sen. Chuck Hagel said. "President Bush must call for an immediate cease-fire. This madness must stop."

Unfortunately, even if Bush does call for a ceasefire at this point, it is clear that he is so weak diplomatically that we will be ignored by both sides.

CNN is just now reporting that the Israeli defense minister is claiming that the three-week bombing campaign has killed 300 Hezbollah fighters out of an estimated 2,000. Assuming that this is true, the question is whether it was worth the more than 500 civilian deaths, not to mention the wanton destruction of Lebanon’s civic infrastructure. And then one has to wonder if Hezbollah hasn’t gained 10 times that number of recruits since the Israeli bombing campaign began.

This was a seriously short-sighted move by the Israeli Defense Force and one that will most likely weaken its position in the Middle East for years to come. The mass destruction of Lebanon’s infrastructure will no doubt end up being repaired with much of the money coming from U.S. taxpayers. If there was any justice in the world, every penny of that money should come from the billions in foreign aid that we send to Israel every year. However, they will likely need all of that aid and more due to the precarious situation that this military misadventure has placed them in.
Posted by Mike Thomas at 8/01/2006 No comments:

Beating my head against the wall 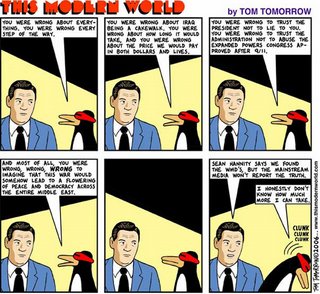 I have to admit that arguing with my friends over at All Things Conservative sometimes makes me feel just like the penguin in this cartoon. But sometimes that’s just what you have to do.
Posted by Mike Thomas at 8/01/2006 No comments:

Last week the local E-N political cartoon Nacho Guarache ran a series of strips that tried to make light of the current crisis in the Middle East by having a “sleeper cell” of Hezbollah terrorists move in next door to the lead character.
In the final strip, seen above, we see Nacho smugly noting that he resolved the situation by calling on his friend, the Rev. John Hagee, “who knows some people.” The final frame has the cartoonish terrorists fleeing an onslaught of missiles fired by several Iraqi jet fighters.
Hagee is a local right-wing fundamentalist preacher, recently profiled by the Wall Street Journal, who take a hardline stance in support of Israel.

The thing that struck me about this Nacho cartoon, however, was that to be true to the actual situation in Lebanon right now, the Israeli fighters probably would have shot their missiles at the building where the Hezbollah militants were staying, thus killing not only the three terrorists, but also Nacho and all of his friends and family. I wonder if Leo Garza, the strip’s talented author, considered such an outcome when he penned the strip? Probably not.

The Israli response to the Hezbollah situation so far has been about as effective as going after cockroaches with a sledge hammer. A lot of incidental damage and very little evidence that you are actually eliminating the real problem.
Posted by Mike Thomas at 7/31/2006 No comments:

Hezbollah made me do it

Over the weekend, an Israeli airstrike in Southern Lebanon struck a residential building in Qana killing 56 civilians, mostly children.
The outrage over this latest massacre of innocent civilians is almost deafening overseas and it forced the hawkish Israeli government to agree to a 48 hour ceasefire (which they promptly broke) to allow any other civilians time to flee the area.
If they had agreed to the ceasefire last week, perhaps this would not have happened. And yet, as disturbing as this latest tragedy is, it has done nothing to sate the enthusiasm of those here in the U.S. who believe Israel has the right to bomb the hell out of the entire country of Lebanon (and any other country it chooses) as payback for the actions of a small (but growing) band of militant Islamic extremists.
A ceasefire would be a sign of weakness, they argue, and would only allow Hezbollah to recharge its batteries and recoup its strength.
Besides that, they say, the attack was justified because Hezbollah was firing rockets from that area. In other words, the ‘devil’ made us do it.

I’m not sure what the Israeli government thinks it is actually accomplishing with this sustained attack on the Lebanese countryside. So far, Hezbollah does not appear to have been crippled - as is the stated goal of both Israel and the U.S. - however the image of both countries has been severely tarnished in the eyes of the rest of the world and that could mean even worse problems for us down the road.
As the Washington Post notes today the crisis could undercut Bush's long-term goals in the region.

The Israeli bombs that slammed into the Lebanese village of Qana yesterday did more than kill three dozen children and a score of adults. They struck at the core of U.S. foreign policy in the region and illustrated in heart-breaking images the enormous risks for Washington in the current Middle East crisis.
With each new scene of carnage in southern Lebanon, outrage in the Arab world and Europe has intensified against Israel and its prime sponsor, raising the prospect of a backlash resulting in a new Middle East quagmire for the United States, according to regional specialists, diplomats and former U.S. officials.

Although the United States has urged Israel to use restraint, it has also strongly defended the military assaults as a reasonable response to Hezbollah rocket attacks, a position increasingly at odds with allies that see a deadly overreaction. Analysts think that if the war drags on, as appears likely, it could leave the United States more isolated than at any time since the Iraq invasion three years ago and hindered in its foreign policy goals such as shutting down Iran's nuclear program and spreading democracy around the world.

"The arrows are all pointing in the wrong direction," said Richard N. Haass, who was President Bush's first-term State Department policy planning director. "The biggest danger in the short run is it just increases frustration and alienation from the United States in the Arab world. Not just the Arab world, but in Europe and around the world. People will get a daily drumbeat of suffering in Lebanon and this will just drive up anti-Americanism to new heights."