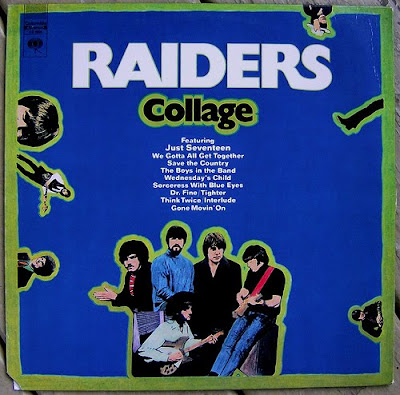 I finally got a CD copy of Raiders Collage, the first rock album I ever purchased as a kid.
It is hard to explain the feeling of nostalgia this brings back. I remember being at the store at Grissom Air Force Base in Indiana. I was probably 6 years old at the time. And my parents let me look through the record section and pick out an album to buy. I had no clue what I was doing. I picked out Raiders Collage because it looked neat. I didn’t know anything about who they were or what kind of music they played.
As it turns out, Collage was a concept album by the band formerly known as Paul Revere and the Raiders as they desperately tried to change their image and keep up with the times. They had been a popular act during the ‘60s when they would dress up in Revolutionary War uniforms and play spirited rock-pop tunes. They became the featured band for one of Dick Clark’s TV shows and got wide exposure for several years.
But in 1970, when Collage was released, that was all behind them. They were already becoming dated and on the verge of becoming a nostalgia act. Several of the original band members had left and lead singer Mark Lindsey was trying to pull the band into the new decade. They ditched the old uniforms, let their hair grow longer, replaced missing band members with new people and shortened their name to Raiders. But the biggest change was the music. It now had a harder edge to it. They incorporated a brass section with fuzzy, distorted guitar licks and a heavy rock beat while Lindsay’s vocals were interspersed with howls and screams and more distortion. They went from sounding like an American version of Herman’s Hermits to sounding like Deep Purple.
Of course, I didn’t know any of this at the time. But I did like it and I listened to the album over and over again.
Unfortunately for the Raiders, Collage was a commercial failure. And even though just one year later they would have their biggest hit of all time - Indian Reservation - even that could not keep them from fading into obscurity.
So there I was, a kid who is totally entranced with an album by a fading rock band, and then one day I picked up the album and the record slid out, fell to the floor and broke off about a one-inch piece that cut into the first tracks on either side. I was devestated because those were also two of my favorite songs. I found that if I could set the needle right next to where the break was and start the record just right, I could hear the end of the scream in the middle of “The Boys in the Band”, which was my favorite part. Sigh.
I never thought to ask my parents to replace the broken album. I just moved on to other music. But years later, I decided to see if I could pick up a copy of the album on CD only to find it had never been issued on CD by any major label and the small independent labels were out of stock and out of print. The best I could do was buy a Greatest Hits compilation of Paul Revere and the Raiders which only had a couple of the songs from Collage - and not the ones that had broken on my record.
Then, last month I saw on the Raiders’ Facebook page that Collage had been reissued on CD and packaged together with the subsequent album that featured Indian Reservation. I was delighted! I quickly found one on eBay and within a week had my copy in the mail.
Now that I’ve had a chance to listen to the whole album straight through again I am impressed with how good it is. Don’t get me wrong! It’s not the Beatles by any means. But it is pretty good. Too bad the album didn’t sell better than it did. In their subsequent albums they dropped their new musical style and went back to the pop-rock approach that had worked for them in the ‘60s. Today, you can still see Paul Revere and the Raiders (I think Paul Revere is the only remaining original member) perform as a full-blown novelty act at the Andy Williams Theater in Branson, Missouri.

Here is a video I found on Youtube for Dr. Fine, probably the hardest, loudest song on the album....