The Sarah Palin of South Texas

If you go to this web site you will find a professionally produced video touting Debra Medina’s campaign for governor.
Medina is a small businesswoman from Beeville who is gearing up to challenge Rick Perry and Kay Bailey Hutchison in the Republican gubernatorial primary from the hard right.
It is not evident at first just how far right Medina is. In the video you will hear lots of the same rhetoric you would hear from almost any candidate. You get testimonials from people using words like “sincerity,” “honesty,” “dedication,” “passion for freedom” and “preserving values.”
Medina accuses current elected officials (Perry) of not representing their constituents. They have “forgotten about serving Texans,” she says.
Furthermore, these elected officials (Bush?) have “brought economic ruin to our nation” and have “imposed government into all aspects of our lives.”
The first hint you will get about where Medina is coming from within the political spectrum is when she says that she “entered politics because local leaders were not honoring the pro-life principles I feel so strongly about.”
She also acknowledges in the video that she homeschooled her children. But beyond that, the video avoids giving out too many details on policies or proposals.
Medina throws out the standard “government is taking too much of our hard-earned money” line, and she promises to “stand for the people” and the “values that make our state great” and lots more pablum such as that.
Her three principles that are repeated throughout the video are:
* Promoting a sound economy (without saying how)
* Halting government interference in our lives (except for reproductive health issues, one would assume)
* Defend family, community and faith (because everyone knows the other candidates are against those things)
Medina wraps up by saying that Texans need a governor who “loves freedom and fights to protect us from big government.”

After listening to her whole feel-good spiel, I’m left wondering about the profound ignorance and blind dogmatism that would lead someone like Medina to launch a campaign for governor against a 15-year incumbent and a sitting U.S. Senator. Because Medina is clearly a far-right wingnut from the Tea Bagging wing of the GOP. If the video doesn’t convince you, then all you need to do is look at her issues page and see where this homeschooler is promising to eliminate the property tax, which is the main source of financial support for the public school system.
The website also stresses state sovereignty, property rights, gun rights, illegal immigration and, of course, abortion. She does not seem to have the foggiest clue about what all is involved with running a state the size of Texas, much less a country the size of the U.S. She naively seems to say that most federal government functions should be halted and left up to “communities and families” to deal with.
Rick Perry and Kay Bailey Hutchison are viewed suspiciously in the video because, even as right-wing as they try to be, they cannot, in their current positions, escape the cold-hard grip of reality which appears to have completely eluded poor Medina.
That is one of the reasons I think that Sarah Palin quit being governor of Alaska. Being governor was constantly reminding her about how right-wing ideology and cold-hard reality don’t mesh. So she decided to give up government responsibility so she could go back to the right-wing fantasy world where most of her supporters reside.
So Palin is gone, but now here comes Medina. Is she South Texas’ answer to Sarah Palin? Could she possibly pull off an upset in the Republican primary the way Palin did in Alaska? Or will she remain largely unknown and just another name on the ballot that people will wonder about after they voted (“I didn’t know all those other people were running!”)
Personally, I hope that Medina will run as an independent after losing the GOP primary and that she takes all of the Tea Baggers with her.
Posted by Mike Thomas at 7/31/2009 No comments: 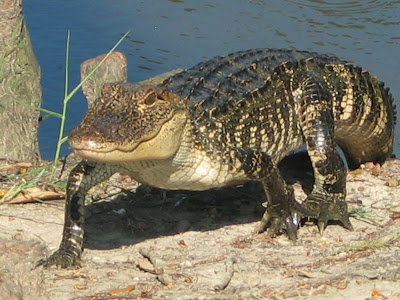 While we were touring a private wildlife preserve on Avery Island in Louisiana we stopped at a small pond where some alligators were swimming. Before long we had five medium-sized gators all checking us out and then this guy came out of the water about three yards from where I took this picture.
Posted by Mike Thomas at 7/30/2009 No comments:

I’m back from our vacation trip to Louisiana to see my sister and her family in Crowley. It was our kids’ first trip to Crowley and their cousins had a great time showing them around the farm, taking them fishing and much more. Nathan got to play Wii with his cousin Zach. Isabel played dress-up with her cousins Samantha and Sarah. Ashley showed us a story she wrote for school. We all went out to dinner at several nice restaurants.
On Saturday we took a swamp boat tour and saw lots of birds - Snow Egrets, Blue Herons - and alligators. Lots of alligators.
Then we went out to Avery Island to tour the Tobasco sauce factory and afterwards saw more alligators. On the drive home we went through Brenham and toured the Blue Bell Ice Cream factory. I haven’t had a chance to download all the pictures from my camera and will post more about the trip when I get a chance.
Posted by Mike Thomas at 7/29/2009 No comments: