The following is a letter to ABC News signed by a distinguished collection of liberal journalists. I wholly concur with the sentiments of the letter.

We, the undersigned, deplore the conduct of ABC's George Stephanopoulos and Charles Gibson at the Democratic Presidential debate on April 16. The debate was a revolting descent into tabloid journalism and a gross disservice to Americans concerned about the great issues facing the nation and the world. This is not the first Democratic or Republican presidential debate to emphasize gotcha questions over real discussion. However, it is, so far, the worst.

For 53 minutes, we heard no question about public policy from either moderator. ABC seemed less interested in provoking serious discussion than in trying to generate cheap shot sound-bites for later rebroadcast. The questions asked by Mr. Stephanopoulos and Mr. Gibson were a disgrace, and the subsequent attempts to justify them by claiming that they reflect citizens' interest are an insult to the intelligence of those citizens and ABC's viewers. Many thousands of those viewers have already written to ABC to express their outrage.

The moderators' occasional later forays into substance were nearly as bad. Mr. Gibson's claim that the government can raise revenues by cutting capital gains tax is grossly at odds with what taxation experts believe. Both candidates tried, repeatedly, to bring debate back to the real problems faced by ordinary Americans. Neither moderator allowed them to do this.

We're at a crucial moment in our country's history, facing war, a terrorism threat, recession, and a range of big domestic challenges. Large majorities of our fellow Americans tell pollsters they're deeply worried about the country's direction. In such a context, journalists moderating a debate--who are, after all, entrusted with free public airwaves--have a particular responsibility to push and engage the candidates in serious debate about these matters. Tough, probing questions on these issues clearly serve the public interest. Demands that candidates make pledges about a future no one can predict or excessive emphasis on tangential "character" issues do not. This applies to candidates of both parties.

Neither Mr. Gibson nor Mr. Stephanopoulos lived up to these responsibilities. In the words of Tom Shales of the Washington Post, Mr. Gibson and Mr. Stephanopoulos turned in "shoddy, despicable performances." As Greg Mitchell of Editor and Publisher describes it, the debate was a "travesty." We hope that the public uproar over ABC's miserable showing will encourage a return to serious journalism in debates between the Democratic and Republican nominees this fall. Anything less would be a betrayal of the basic responsibilities that journalists owe to their public.

Fox News could have done a better job moderating the Democratic debate. ABC has really shot itself in the foot here. Gibson should be demoted from his anchor chair. Stephanopoulos should be fired.
Posted by Mike Thomas at 4/18/2008 No comments:

Smoke gets in their eyes

Like Ann, I could be described as “desperately optimistic” about Barack Obama’s chances for election in November.
All the signs point to a big Democratic victory in November - fundraising, turnout percentages, Bush’s unfavorability, etc.
But the one thing that troubles me are these damn polls that show John McCain leading Obama in so many states.
What is wrong with these people?!? How can Bush have a 70 percent unfavorability rating while, at the same time, McCain, who promises to carry out Bush’s same policies for the next four years, has a 64 percent favorability rating?
It doesn’t make sense. Are people really this dumb? Don’t answer that!

It’s like someone getting a report from their doctor that if they don’t stop smoking Marlboros they will die from lung cancer. So, they start smoking Winstons instead.
That’s how stupid it is.

I think too many people fail to look at the big picture when casting their votes. They allow themselves to be distracted by totally irrelevant issues - Obama’s former pastor, for example - until it clouds out the more important issues - like the war in Iraq and the tanking economy.
What we need is better media coverage that will blow some of this smoke out of the room and give people a clearer picture of what this election will mean. Unfortunately, much of our media tends to behave like a big fog-making machine, further clouding the picture worse than it is.
Our only hope is that the prevailing winds that are beyond the control of the media and the GOP spin machine will be strong enough to clear some of this mess out before we get stuck with four more years of the same thing.
Posted by Mike Thomas at 4/15/2008 No comments: 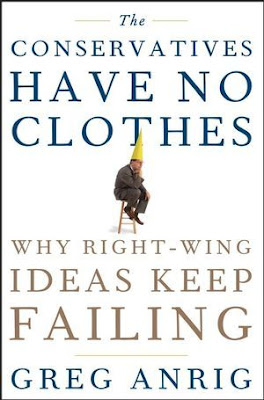 I bought a book this weekend that really sums up a lot of what I have been trying to say on this blog for the past year.
The Conservatives Have No Clothes: Why Right-Wing Ideas Keep Failing by Greg Anrig gets right to the point I’ve been wanting to make: It’s not just Bush and Cheney and Rumsfeld and Rove and DeLay, etc. It is the whole rightwing ideology that underlies their actions that needs to be addressed.

Mark Schmit said it well in a review of Anrig’s book:

As even the most committed conservatives have begun to recognize the scale of the debacle, foreign and domestic, of the seven years during which they have held unchecked power, they have begun to plot a slick escape from the consequences. "Oh, that?" they will say. "That wasn't conservatism. That was something completely different." It started out as conservatism, they say, but was corrupted by the culture of Washington, by Jack Abramoff or Tom DeLay. Or, they say, so sorry, we misjudged George W. Bush, failed to see how incompetent he was. Or, as in recent tributes to Karl Rove on his resignation from the White House, they will admit that the single-minded focus on winning elections, bending all policy to that purpose, destroyed the conservative soul. If they have the chutzpah of Rove himself, they will blame Hillary Clinton.

If there were any justice in the world, such claims would take their place in history alongside those of the old Marxists who, as Alan Wolfe noted in these pages last year ("Why Conservatives Can't Govern," July/August 2006), insisted that the only problem with communism was that it had never been properly implemented. The noble dream, they argued, should not be judged by its real-world manifestations. Maybe so. But in the real world, ideologies are judged by their consequences.

Such justice is unlikely for the recent American right, however, and the evasion of responsibility has been made easier by Democrats' nearly total focus on individual actors: George W. Bush and, to a lesser extent, Rove and Dick Cheney. Thus the spate of books with titles like The Lies of George Bush and Bush's Brain. Now Rove is gone, DeLay is gone, and in sixteen months Bush and Cheney will join them, but their brand of conservatism may never be held to account for its failures in practice.

Like I’ve said before, we can’t focus entirely on these individuals (although they have certainly earned their infamy and vilification) and risk allowing a new group of right-wingers like John McCain to step in and continue the same failed policies that have been so disasterous for our economy and our foreign policy.
Posted by Mike Thomas at 4/14/2008 No comments: