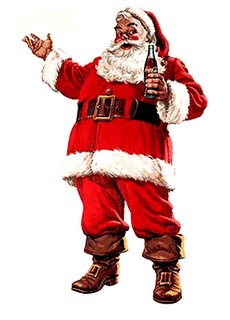 I was about to write a post about why I think the commercialization of Christmas is actually a good thing on the grounds that any publicity is good publicity. But then I found this article on the Web that pretty much says everything I was going to say.
So I will shamelessly copy this fellows article and reprint it here:

As a Christian, I can only look at this and say: Good thing.

Compare Christmas to other Christian holidays. Logically, our biggest holiday of the year should be Easter. After all, lots of people are born, but very few come back from the dead. There is very little secularization of Easter: A little playing around with Easter eggs and chocolate bunnies, but nothing like the secular stories and traditions built up around Christmas. I am hard-pressed to think of a single story or song about the Easter bunny; I can easily rattle off dozens about Santa Claus. Easter has largely remained a purely spiritual holiday, celebrated almost exclusively through songs and symbols that focus directly on what the holiday is all about -- the resurrection.

So why is it that Easter gets so much less attention than Christmas? Not just in the secular world, but even within the church? Perhaps your experience is different, but in churches I've attended, not only will the Sunday before Christmas be dedicated to the holiday, but at least several Sundays before we will be singing Christmas songs, lighting advent candles, etc. There is usually at least one special service scheduled to celebrate it, on Christmas or Christmas Eve or the Sunday evening before. Somewhere in there will be a big special program for Christmas, with planning and rehearsals begin months in advance.

Easter? The church may have a sunrise service, that is, the service starts earlier than usual that day. And that's about it. 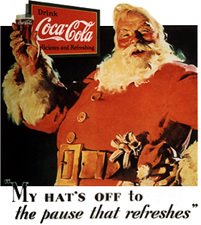 To the Christian, all the little rituals and traditions give him something to do to celebrate the holiday. Easter should be the most exciting day on the Christian calendar, but it is, to put it bluntly, boring. It is boring because there is nothing in particular to do about it. There is nothing to look forward to, nothing to plan, nothing to get excited about.

At this point I don't doubt that some deeply spiritual person will say, "How shallow! You've missed the point. You should be excited about the thought of the resurrection. You should be overjoyed at the knowledge that Christ has saved you." Etc.

I reply, Maybe we should, but we don't. Because all you are talking about is thinking. And I can think these thoughts at any time, there is nothing about Easter that makes them particularly special. I do not have to eagerly anticipate thinking about the resurrection like a child has to anticipate opening his presents at Christmas. To think about thinking something is to think it. And for many people -- myself included -- the fact that they can do these things whenever they want means that they rarely do them at all.

Why do you think stores advertise a sale as "one day only" or "while supplies last"? Presumably they are making money off this sale or they wouldn't be doing it. So why not do it all year long and make more money? Aren't they afraid that there are people who would like to come but won't be able to make it the day of the sale, and so won't bother to come at all? The answer, as any marketing person will tell you, is, sure, they might lose some sales because they made the sale too short. But by making it short, they get many people to think, Wow, if I want to get this, I'd better go right now. If the sale was on 365 days a year, there are many many people who would say, I'll go tomorrow, and the next day they'd again say, I'll go tomorrow, and they'd keep on saying that, and never get there. 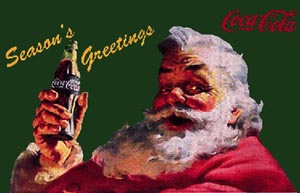 Christmas is a special day because there are specific things we do that day that we do not do on other days. And so we plan, and prepare, and anticipate.

But more important, Christmas, as presently celebrated in America, serves as a bridge between the Church and the world outside. It is precisely because Christmas has been secularized that people with little interest in spiritual things celebrate it anyway. Christians created all sorts of fun activities to celebrate Christmas: giving presents, eating a fancy meal with friends and family, decorating the house, etc, etc. Non-Christians see that these things are fun and want to participate ... and they can't help but occassionally hear and think about what the holiday is really celebrating.

It is precisely because Christmas has been commercialized that stores and shops all over the country spend hundreds of millions of dollars talking about Christmas. At what other time of year do you see television commercials that make any reference, however indirect, to Jesus Christ?”
Posted by Mike Thomas at 12/23/2005 No comments: 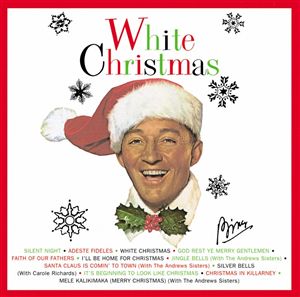 My list of favorite Christmas music hasn’t changed much from last year. The only significant addition to the rotation this year is The Chipmunks Christmas, one of my wife’s records from her youth that I burned onto CD. It is now highly popular with my son.

Today, Christmas music is a major industry. Every artist, it seems, is obligated to put out a Christmas album. But does anyone remember who started the whole thing?

Guess what the first commercially successful Christmas recording was.

White Christmas? No, that came later.

It was Silent Night, recorded by Bing Crosby in 1935. The record became Crosby’s biggest hit of the 1930s. But Crosby was uncomfortable with the idea of profiting from a popular Christmas carol, partly because of his devout religious faith, and opted to donate all the proceeds from the song to charity.
Silent Night was the top selling Christmas record until it was eclipsed by Crosby’s recording of White Christmas in 1942, which became the highest selling record of all time.

It’s a shame today that Crosby gets so little respect in our popular culture. To understand just how big a star Crosby was in his day, here is a synopsis
compiled from Gary Giddins’ book, Bing Crosby: A Pocketful of Dreams – the Early Years 1903-1940,
published by Little, Brown in 2001. 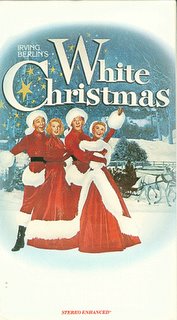 • He made more studio recordings than any other singer in history.
• He made the most popular record ever, “White Christmas,” the only single to make American pop charts twenty times, every year but one between 1942 and 1962.
• Between 1927 and 1962 he scored 368 charted records under his own name, plus twenty-eight as a vocalist with various bandleaders, for a total of 396.  No one else has come close; compare Paul Whiteman (220), Frank Sinatra (209), Elvis Presley (149), Glenn Miller (129), Nat “King” Cole (118), Louis Armstrong (85), the Beatles (68).
• He scored the most number one hits ever, 38, compared with 24 by the Beatles and 18 by Presley.
• In 1960 he received a platinum record as First Citizen of the Record Industry for having sold 200 million discs, a number that doubled by 1980.
• Between 1915 and 1980 he was the only motion-picture star to rank as the number one box-office attraction five times (1944-48).  Between 1934 and 1954 he scored in the top 10 fifteen times.
• He was nominated for an Academy Award for best actor three times and won for “Going My Way”.
• He was a major radio star longer than any other performer, from 1931 until 1954 on network, 1954 until 1962 in syndication.
• He financed and popularized the development of tape, revolutionizing the recording industry.
• He created the first and longest-running celebrity pro-am golf championship, playing host for thirty-five years, raising millions in charity, and was the central figure in the development of the Del Mar racetrack in California.
• He made the largest number of V-discs and army broadcasts of any American entertainer and raised $14.5 million in war bonds (a “Yank” magazine poll declared him the individual who had done more for GI morale during World War II).
Posted by Mike Thomas at 12/22/2005 No comments: 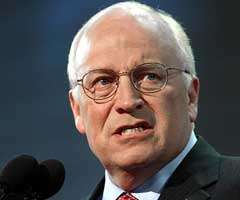 Merry Christmas from Scrooge McCheney and the GOP!

The Scrooge cut short his Middle East tour to serve as the tiebreaker on a noxious budget bill that pretends to reduce the deficit by slashing programs for the poor and elderly.

Hey, but at least we are finally getting some fiscal discipline, right? Wrong.

According to budget experts, the bill would barely dent the federal deficit, cutting less than one-half of 1 percent from an estimated $14.3 trillion in federal spending over the next five years.

And what is worse is that the projected $40 billion in savings over five years has already been wiped out by the $56 billion worth of tax cuts that Republicans pushed through earlier this year.

Opponents of the bill, including all Democrats and five honest Republicans, said “the poor would bear the brunt of the cuts -- especially to Medicaid, child support enforcement and foster care -- whereas original targets for belt-tightening, such as pharmaceutical companies and private insurers, largely escaped sanction.”

Under the provision, student loan interest rates would be locked in at 6.8 percent and could not be refinanced as commercial rates fluctuate.
"They could give students a lower interest rate, but their choice is to keep interest rates high," said Luke Swarthout of the U.S. Public Interest Research Group. "They're asking students to pay for tax cuts."
Posted by Mike Thomas at 12/21/2005 No comments:

George W. Bush - “I’m above the law and can do whatever I want.” (or words to that effect).

I think it is important to distinguish legal domestic spying by the NSA which goes on all the time and is indeed important in the war on terror, from the secretive, illegal spying that Bush has authorized.
Joshua Micah Marshall touches on that distinction

...it seems the White House and some editors are taking to arguing that surveillance or domestic wiretapping is necessary for national security, that it saves lives.
Of course, it does. What a stupid thing to say, or for the White House, what a disingenuous thing to say.
Wiretaps are conducted around the country every day. The FISA Court alone approves something like a half a dozen a day in highly classified national security or espionage related cases.
The only issue here is why the president decided to go around the normal rules that govern such surveillance, why he chose to make himself above the law.

and Redhedd at firedoglake goes more in depth.

Suffice it to say that we already have provisions in place to allow for emergency spying when security issues are at stake. Why does the Bush administration still feel that it has to circumvent the law this many years after 9/11 and not allow the FISA court to oversee their spying operations?
Posted by Mike Thomas at 12/19/2005 No comments: