Music cloud on the horizon 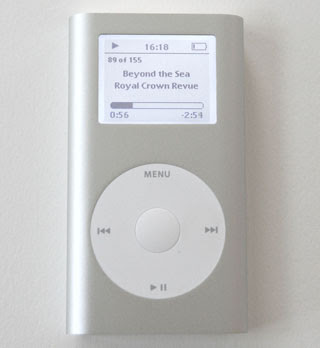 When I was in college in the mid-to-late 1980s, the digital music age was in its infancy. Compact discs or CDs - introduced in 1982 - were just starting to make an impact on the market although it would still be several years before I would buy my first CD player.
During this time, my friend Joe Johnson and I got into a discussion about digital music and the possibilities it entailed. Joe had an idea for a device he called the “digibox” which would essentially be a juke box with a hard drive containing far more music than could fit in a conventional juke box of the day.
I had a different idea. I figured why not build one giant computer hardrive and load up all the music that you could get permission for and then set it up like a cable TV subscription service. I imagined a firm that would run a cable into your house and plug it into your stereo. Then you would get a large catalog listing all the available music and some kind of interface device where you could type in the numbers of whatever songs you wanted to hear and Voila! instant music. For that, I figured a person could pay a monthly fee like getting HBO or something.
Unfortunately, neither Joe or I ever seriously pursued our ideas. Years later when the first iPod came out from Apple, I immediately recognized it as a mini-version of Joe’s Digibox.
So Joe’s idea turned out to be a huge success while I figured that mine was just a dead end that never would have got off the ground.
But just the other day I heard a story on NPR about a cloud-version of iTunes that is still in the planning stage and I was immediately reminded of my variation on the digibox idea.
I have a basic iPod which I love but which is woefully too small for my music collection (4GB). I used to have a diverse selection of Rock and Jazz music loaded up on it, but since I’ve recently been on a Classical music kick I have no room for anything else. So the idea of a cloud service where you could put all your digital music and have ready access to it at the push of a button is very intriguing and falls right in line with what I was thinking about back in college. Unfortunately, it appears that the music cloud is still a long ways off as the music industry tries to figure out how it can get the biggest possible cut from it.
Posted by Mike Thomas at 9/01/2010 No comments:

The foul fowl's stench gets worse

The following is a Letter to the Editor that I sent to the San Antonio Express-News this morning...

The foul stench emitting from the Express-News comics page was even more odorous and offensive this past week as the “Mallard Fillmore” strip launched a vicious and nasty week-long attack on public school teachers to mark the beginning of the new school year.
Why the Express-News editors tolerate this nastiness is a mystery to me. Whenever the Doonesbury strip has anything even remotely controversial they are quick to yank it and run replacement strips. But I suppose a mean-spirited “comic” strip that mocks public school teachers as being stupid and lazy is perfectly fine with them.
The public school system is a favorite target of Bruce Tinsley, the far-rightwing author of the humor-free Mallard strip. Whenever he tires of drawing grotesque caricatures of politicians he does not like — with their eyes crossed and their noses and chins stretching off the page — Tinsley typically turns his wrath on postal workers, school teachers, labor unions, immigrants or any other group of people to serve as the scapegoats of his twisted ideology.
Real conservatives should be just as offended by Tinsley’s hateful diatribes as the people who get slapped in the face everytime they open their newspaper. They should demand that the Express-News follow the lead of its sister paper in Houston and dump the foul fowl and replace it with a conservative strip that does not bring shame and dishonor on their side of the political spectrum. Prickly City, which already runs in the E-N, is one example and there are many others.
I am not a teacher, nor am I employed by the school system or any part of the public sector. But I send my kids to public school and I respect the good work that their teachers do to give them an excellent education. It is too bad that our teachers have to be denigrated everyday in their daily newspaper’s so-called funny pages.