Nothing seems to upset right-wingers more than strong-willed women.
Just look at who the No. 1 boogieman is for the right today, the person they villify the most of all: Hillary Clinton.
And then there is the person they are trying to turn into the boogieman for the mid-term elections: soon to be Speaker Nancy Pelosi.
Or how about of all the musical groups that are politically liberal and outspoken, which is hated the most on the far-right: The Dixie Chicks, of course.
And of all the people who are opposed to the war in Iraq, who has been demonized far more than anyone else: Cindy Sheehan, naturally.
And the list goes on...
Jane Fonda, Barbara Streisand, Martha Stewart... All seem to take more than their fair share of abuse.
So why do right-wingers seem to go after women so aggresively? A man has to really work hard to achieve the level of villification that these women seem to get naturally. Michael Moore and Ted Kennedy have worked hard to get where they are, but they still seem to get overshadowed by the raw hatred that spews forth from the far right whenever a woman seems to get uppity and starts acting like she doesn't know her place.
Posted by Mike Thomas at 10/28/2006 No comments: 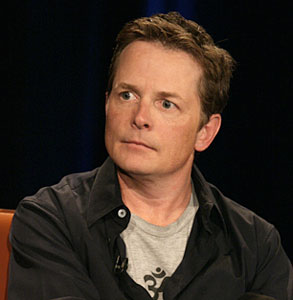 Fox has been incredibly gracious in responding to the insults and smears coming from that worthless waste of human flesh that is Limbaugh and others who parrot his words. And hopefully that will be enough to push people in the right direction on this crucial issue.
Posted by Mike Thomas at 10/27/2006 No comments:

More and more Republicans keep getting sent to the slammer. This time it’s David Safavian, a Bush administration official who served as chief of staff in the General Services Administration. He has been sentenced to 18 months in prison for concealing his relationship with disgraced lobbyist Jack Abramoff.

Safavian will join fellow Republicans Jack Abramoff, Randy “Duke” Cunningham, Bob Ney, John Rowland and probably several others I can’t think of off the top of my head. Plus there are a whole slew of Republicans currently under indictment as you can see here. .

My conservative friend Bill Crawford has changed his mind on the issue of gay marriage and now believes it is OK.

We live in a tough world, and I know that without my wife I wouldn't be as happy a person, and I can't deny that to others. If two guys, or gals, love each other, and want to support each other through life's little bumps, then more power to them. Who am I to say no to love?

Changing one’s mind, especially on hot-button issues like this is never easy and Bill should be commended. It think it is all the more so because it meant rethinking and rehashing an issue that has been very key to the right-wing base of the Republican party over the past several years.
I hashed out this issue myself a while back.
I would just note that I too have changed my mind on some issues - affirmative action being one example - and it is never easy.
Posted by Mike Thomas at 10/25/2006 No comments:

I’ve done plenty of grumbling about the Democrats prospects in the upcoming elections. And I’ve been especially hard on Chris Bell, the Democratic nominee for governor.
So I’m pleased to say now that Bell has surprised me by running a better than expected campaign. In fact, at this point it looks like he will come in second, rather than fourth as I had predicted. Considering that he is still fourth in the fund-raising race, that is not a bad showing.
But now I think we’ve come to a time when Kinky Friedman will have to make a decision. His campaign is currently mired in fourth place, but he is still drawing about 16 percent in the latest polls. That is not enough to put him in the governor’s mansion. But it may be enough to allow him to play the role of kingmaker.
I think Kinky has three choices. If he stays in the race, he pretty much guarantees that Republican Rick Perry will be re-elected. But he could throw his support to someone else and possibly tip the scales in their favor. At this point, Chris Bell seems the best option for that to happen. But he could also throw his support to Strayhorn and possibly put her back into contention.
I’m guessing that he will take the first option and do nothing. And that is a shame. It means his quixotic campaign will soon be forgotten as a mildly amusing but ultimately meaningless interlude. He was never serious about actually changing the way government operates in Austin because when he had the chance to make a difference he chose not to.
Posted by Mike Thomas at 10/25/2006 No comments: 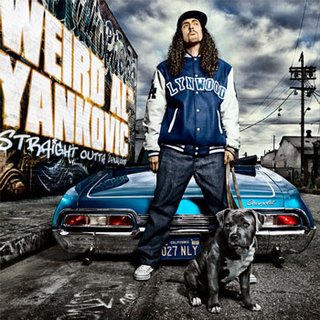 Weird Al Yankovic has finally broken into the Top 10 on the music charts with his latest single - “White and Nerdy”, a parody of a rap song by the artist Chamillionaire.
I’m thrilled for Weird Al. I’ve been a big fan of his since I was in college. He first came to my attention through his popular parodies of Michael Jackson songs like “Eat It” and “Fat”. His "WEIRD AL" YANKOVIC IN 3-D album was one of the last records I ever bought. I have Dare To Be Stupid, Even Worse, Off the Deep End on casette tape and Bad Hair Day on CD.
My wife says Weird Al songs are funny the first couple of times you hear them then they just become annoying. Not for me, I can listen to his music all day and still get tickled.
Weird Al is one of the most successful and talented music parodists of our generation and I’m glad he is finally getting some mainstream recognition. Not that he hasn’t been hugely successful on the fringes. He has a huge cult-like following. People follow his concerts around like it was the Grateful Dead and they have fan conventions and much more. Check out The Official "Weird Al" Yankovic Web Site and his popular MySpace page.
Posted by Mike Thomas at 10/23/2006 No comments: