I've been having some problems with my comment links disappearing ever since I paid to upgrade my Haloscan service. The links seem to randomly disappear throughout the day and I haven't any clue as to what is going on. This has not been a problem at my other non-upgraded blog. The folks at Haloscan have been less than helpful throughout all of this: Not responding to my e-mails, ignoring my posts in their technical service forum, and then finally giving me a weak "it's not our fault" response on Friday.

So anyway, I'm seriously considering switching to a different comment service although I hate to lose access to all my old comment, but I may not have any other choice.
Posted by Mike Thomas at 4/21/2006 No comments: 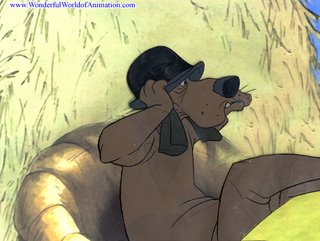 "I hear the voices, and I read the front page, and I know the speculation. But I'm the decider, and I decide what is best." — President Bush

When I first heard that quote from Bush it brought to mind an image of the dog Napoleon from Disney's The Aristocats.

"Wait a minute. I'm the leader! I'm the one that says when we go.

Of course, in my head I change "leader" to "decider" and change "we go" to "Rumsfeld goes" and so forth.

A weak effort at parody, I know. That's what comes with living with a 2-year-old who watches almost nothing but Disney movies, I guess.

But other folks out there have done a far better job of lampooning this newest Bushism. Frequent commenter Ann pointed me to this reworking of a popular Dr. Suess tale.

Also, via Atrios, comes this wickedly funny version of the Beatles' "I Am The Walrus".

Interestingly, "decider" is actually a legitimate word according to my dictionary, but it is certainly obscure.
Posted by Mike Thomas at 4/20/2006 No comments:

“I changed my mind as part of a necessary adjustment to reality,” — Francis Fukuyama

Francis Fukuyama, the famous neocon intellectual, did a brave thing recently: He changed his mind about the Iraq war.
In an Op-ed piece that ran in a number of papers over the weekend, Fukuyama makes some excellent points that are sure to rankle folks on both the right and left ends of the political spectrum.
First he says that “no one should be required to apologize for having supported intervention in Iraq before the war.”
I don’t necessarily agree with that, but fine, whatever.
But then he goes on to make this salient point:

The debate over the war shouldn't have been whether it was morally right to topple Hussein (which it clearly was), but whether it was prudent to do so given the possible costs and potential consequences of intervention and whether it was legitimate for the U.S. to invade in the unilateral way that it did.

I’ve made that same point here many times. Just because I opposed launching a pre-emptive strike and a massive land invasion of Iraq does not mean that I supported keeping Hussein in power anymore than Bush’s decision not to invade North Korea three years ago means he supports keeping Kim Jong Il in power.

Fukuyama makes a lot of other good points and I would urge everyone to go and read the whole article, but the part that struck me the most was right at the end where he bemoans the intransigence of most political opinion today:

Political debate has become a spectator sport in which people root for their team and cheer when it scores points, without asking whether they chose the right side. Instead of trying to defend sharply polarized positions taken more than three years ago, it would be far better if people could actually take aboard new information and think about how their earlier commitments, honestly undertaken, actually jibe with reality — even if this does on occasion require changing your mind.

This is sad but true in many respects. I know I have been guilty in the past of cheering on my “team” when I have not adequately studied and researched the issues being debated. Sometimes we all need to adjust our opinions to better align ourselves with reality.
Posted by Mike Thomas at 4/17/2006 No comments:

Here is an entertaining timewaster for all those Bush bashers out there.
Just refresh the page to watch him fall again and again and again...
Posted by Mike Thomas at 4/17/2006 No comments:

I hope everyone had a nice Easter weekend. We went to Houston and had my little girl christened at the same church where her brother was christened two years ago and where my wife and I were married 16 years ago. By the same minister, no less.
My sister and her family were unable to make it, unfortunately, but they sent a whole bunch of Easter goodies and christening gifts in the mail. My mom did make it so the kids had the full attention of both sets of grandparents.
My in-laws then treated everyone to a brunch at a nearby cafe and afterwards we went back to their house for an easter egg hunt. My little boy is 2.5 and his cousins are 3 and 1.5 respectively, so it’s a great age to watch them running around in the backyard excitedly looking for plastic eggs in the grass.
We always end up with tons of food whenever the family gets together like that and we came home with a cooler full of leftovers. Another big treat was the delicious Easter cookies that my sister-in-law made. Now if I can just convince her to make those cookies on other occasions as well.
Posted by Mike Thomas at 4/17/2006 No comments: