The case of Maher Ararshould be very disturbing to most Americans. He is a Canadian citizen of Syrian descent who was falsely accused of being an Islamic extremist by the Candadian authorities in 2002.

The Syrian-born Mr. Arar was seized on Sept. 26, 2002, after he landed at Kennedy Airport in New York on his way home from a holiday in Tunisia. On Oct. 8, he was flown to Jordan in an American government plane and taken overland to Syria, where he says he was held for 10 months in a tiny cell and beaten repeatedly with a metal cable. He was freed in October 2003, after Syrian officials concluded that he had no connection to terrorism and returned him to Canada.

So when our government was informed that this man may have had connections to al-Qaeda our first reaction was to have him shipped over to Syria and tortured. And of course that was soooo effective considering that he immediately confessed to training with al-Qaeda at one of their camps in Afghanistan. But that turned out to be complete B.S. - he had never been to Afghanistan and had zero connection to al-Qaeda or any other extremist groups - so it was all for nothing. Meanwhile, we lied to the Canadians about his whereabouts so that they could not intervene.

As if this story was not awful enough, President Bush and the morally bankrupt Republican Party continues to push legislation that would make torture the common, everyday routine practice of our government - not even something that we would try and cover up anymore.
Quite frankly, the November elections can't get here soon enough. I just hope that there are still enough decent Americans paying attention to what has been going on to make a difference on election day.
Posted by Mike Thomas at 9/21/2006 No comments:

The Devil made us do it 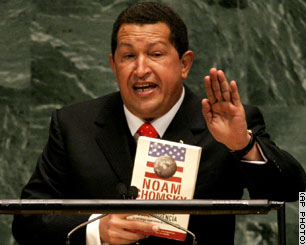 While making one of his patented Bush-bashing speeches at the U.N. today, Hugo Chavez, the brash, outspoken leader of Venezuela, waved a copy of a book by Noam Chomsky, demonstrating that he at least has good taste in literature.
This will, of course, excite a lot of the right-wing Chomsky-bashers into a frenzy of condemnation of the Cambridge-based linguist and U.S. foreign policy critic. But of course, Chomsky can’t control who reads his books (not that he would want to) nor does the character of the person reading the book detract from its truthfulness and sincerity.
But Chavez didn’t stop there in his provocations. I think he stepped over the line when he referred to President Bush as the Devil. This was an outrageous statement from a national leader and Chavez should apologize promptly. First off, it is clearly not true. Everybody knows that Dick Cheney is the Devil. Secondly, even if he was the Devil, we as U.S. citizens have the right to elect whomever the Supreme Court says we can. That’s what democracy is all about.
Posted by Mike Thomas at 9/20/2006 No comments:

For all the influence-peddling that has been exposed in the run-up to the midterm election, corruption on Capitol Hill has not become a decisive issue -- here or in much of the country.

Politicians and pollsters say this year, widespread voter dissatisfaction with Congress has the electorate in a less forgiving mood. This campaign season also is marked by a number of close contests, making politicians vulnerable to charges of ethical lapses -- and raising the political stakes if the charges stick.
Posted by Mike Thomas at 9/19/2006 No comments: