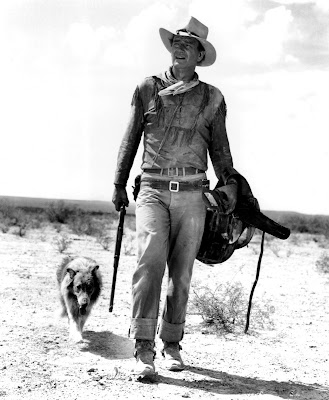 I’ve always loved John Wayne movies and have been collecting them on DVD now for several years. But only last night did I take the time to watch “Hondo” for the first time.
I was greatly surprised by how much I liked the movie. It has now vaulted to the top tier of my list of all-time favorite John Wayne movies along with “The Searchers,” “Stagecoach” and “Rooster Cogburn”.
The iconic photo of John Wayne carrying a saddle and walking next to a dog hung on my dorm room wall for four years in college. But I did not know until the other day that the image came from the movie “Hondo”.
My favorite scene in the movie is when Wayne has his first confrontation with the absent father at a nearby outpost. As the man storms out of the tent he finds his way blocked by Wayne’s dog “Sam” who growls menacingly. He prepares to kick the dog and then stops when he hears Wayne protest and cock his rifle. The man glares back at him and Wayne says “Walk around him.”
The man spits back that he would never walk around a cur dog and Wayne responds with this classic line, “A man oughta do what he thinks is best.”
The man looks back at the growling dog and then walks around.
Posted by Mike Thomas at 10/14/2010 No comments: