I think rightwingers like to rant on and on and on about the mythical re-emergence of the Fairness Doctrine just because they know it ticks off liberals.
They know full well that there is no chance of the Fairness Doctrine ever coming back, but they go on about it anyway just to rub liberals noses in the fact that they are almost totally marginalized in the media.
There is no other way to explain how these conservatives who dominate the radio and television airwaves can possibly claim with a straight face that the Fairness Doctrine would result in their being censored.
A majority of voters in San Antonio voted for Obama this past election. And three of the four congressman representing the city are Democrats. But you wouldn’t know that from listening to the local talk radio stations. Here is the lineup from WOAI 1200, the biggest talk station in town:

A solid six-pack of wingnuttia for our everyday consumption. So what about the other talk radio station - KTSA 500? Surely they offer some variety, some alternative for people who don’t relish hearing non-stop far-right propaganda and lies 24-7. Nope. They simply offer the left-over wingnuts that WOAI discarded, like Bill O’Reilly and Neil Boortz along with local rightwingers Trey Ware and Jack Riccardi.
I was listening to Riccardi’s show this morning. For some reason I had gotten the impression that he was a liberal or at least moderate on some issues. But after listening to him trying to blame the Democratic Congress for the current Bushian fiscal nightmare we are in and then looking at his blog where he supported Mitt Romney for president, it is clear that he is just a slightly toned-down rightwinger, only moderate in comparison to the certified lunatics like Glenn Beck and Sean Hannity.
Interestingly enough, the local stations don’t even make an effort to have any ethnic or gender diversity in their lineups, much less ideological diversity.
Most San Antonians have responded to this situation by simply not listening to the local radio shows anymore, leaving just a small, concentrated audience of like-minded rightwingers to provide the stations with the excuse they need to continue ignoring and dismissing the vast majority of the local community.
I don’t know what a Fairness Doctrine would do, but it is quite clear that we currently operate under an extreme version of the Unfair Doctrine.

Update
I left out the one other station in San Antonio with a news/talk format: KLUP 930 AM.
Here is their weekly lineup: Bill Bennett, Mike Gallagher, Dennis Prager, Michael Medved, Michael Savage and Hugh Hewitt.
All white, all male and all far-right looneytunes everyone. Yippee!
Posted by Mike Thomas at 3/19/2009 No comments:

Glenn Beck is seriously twisted, as Donna noted the other day.

Steve Benen and Blue Texan have good rundowns on the recent Beckian wierdness.
But I think what disturbs me the most is how this lunatic is becoming increasingly popular with the local rightwingers.
Nick at Conservative Dialysis linked approvingly to Beck’s paranoid reworking of the National Anthem and Andres Bocagnera of San Antonio Conservative has been taken in by Beck’s latest hyped up charade.

These “Nine Principles and 12 Values” (or the “Nine Prophecies of the 12 Sarcofagi” as Dennis Miller recently mocked on Fox) are worth a look to see just how badly this guy’s screws have come loose.

The Nine Principles
1. America is good.
2. I believe in God and He is the Center of my Life.
3. I must always try to be a more honest person than I was yesterday.
4. The family is sacred. My spouse and I are the ultimate authority, not the government.
5. If you break the law you pay the penalty. Justice is blind and no one is above it.
6. I have a right to life, liberty and pursuit of happiness, but there is no guarantee of equal results.
7. I work hard for what I have and I will share it with who I want to. Government cannot force me to be charitable.
8. It is not un-American for me to disagree with authority or to share my personal opinion.
9. The government works for me. I do not answer to them, they answer to me.

The first “principle” - America is good - seems like it should be followed by several exclamations of What!! What!!! as in today’s urban lingo when a hipster throws out a provacative statement and then openly entreats anyone to challenge him on it. Beck is just asking for anyone to question him so that he can denounce them as “unAmerican” or what have you.
But now compare Principle 1 with Principle 8. First you are saying that “America” is always good no matter what, but then you are declaring that you can still be critical of “authorities” without being called “unAmerican.” Just what do these people think “America” is anyway? Clearly to them it is some abstract concept which they can place up on a podium and pretend to “love” while at the same time they can vent their hatred and disgust at the American government and American authority figures. Because after you get past the first two principles, the rest is pretty much just a long-winded anti-government screed.
Or how about principles 4 and 5? Does anyone see any problems here? First they declare that “My spouse and I” are the ultimate authority, not the government. But then they declare that “If you break the law you pay the penalty”. But who makes the laws? The government, of course. So how can rational people not see a contrast between these “principles”?
“Justice is blind and no one is above it” is a nice saying. But it ignores the fact that laws are not always just and forcing someone to “pay the penalty” doesn’t always result in “justice.” But I guess I’m getting too complicated for the simple-minded folks who would buy into this stuff.
These “principles” can best be summed up as defensive, angry outbursts motivated by selfishness, greed and a deep distrust and dislike for one’s fellow Americans.
Posted by Mike Thomas at 3/17/2009 No comments: 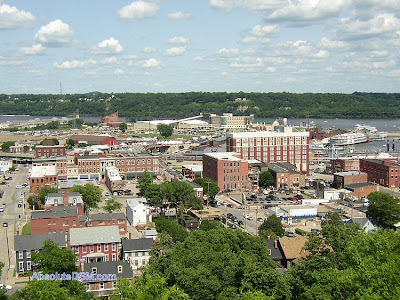 It was beautiful, but it was also cold. It was 17 degrees when we got there.

We stayed at the Grand Harbor Resort Hotel.... 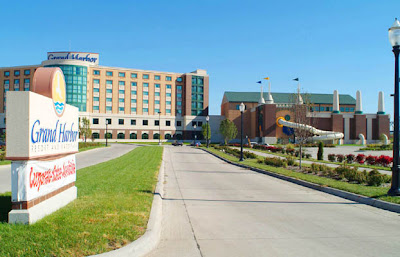 Our room had a great view of the Mississippi River. I had never seen a river freeze before.


We took the kids to the indoor water park at the hotel....

It was warmer than I expected and great for our kids because most of the water was shallow.

We went to the National Mississippi River Museum & Aquarium.... 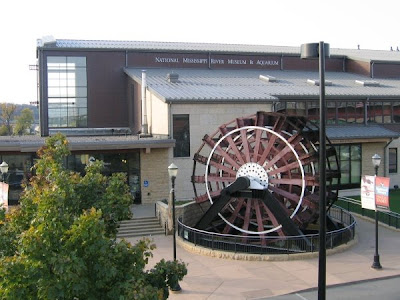 Kept the kids entertained for most of one day and I learned a lot about the Mississippi River.

They call Dubuque the Land Where Eagles Soar... 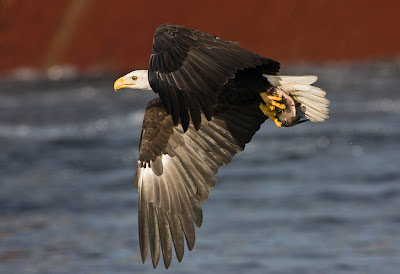 They're not kidding. We saw several flying around our hotel while we were their.
Posted by Mike Thomas at 3/16/2009 No comments:

It's the first of another week, so that must mean it's time to take a look at some of the best posts from last week by members of the Texas Progressive Alliance. Here are the submissions:

Vince of Capitol Annex took a new look at the latest creationist attack on science in Texas classrooms in Bill Would Make "Strengths and Weaknesses" Teaching Of Evolution State Law.

Off the Kuff takes a look at who would be affected by the voter ID legislation that is being pushed in the Lege by Republicans.

WCNews at Eye On Williamson posts on the turmoil facing some inside Texas GOP regarding Gov. Perry's decision to turn down$555 million dollars of unemployment insurance from the stimulus money, UI debate must be maddening for the GOP supporters of Hutchison.

Neil at Texas Liberal reads Malcolm X in a cemetery and says that Rick Perry has found his schoolhouse door to stand in and block.

The Texas Cloverleaf expands upon Capitol Annex's look at Garnet Coleman's proposed repeal of the anti-gay marriage amendment in Texas.

BossKitty at TruthHugger truly believes there is profit for everyone when wasteful and costly opposition to Medical Marijuana is brought in to the economy instead of keeping it out. The War on "Illegal Activities" should focus on smuggling Heroin and Human Trafficking. Can Marijuana Rescue The Economy In 2010 Like Booze Did In 1933

At Texas Kaos, Lightseeker highlights the Texas Shakedown for those who make the mistake of driving in Tenaha, Texas while not white.

Governor "Good Hair, Bad Policy" Perry starts his primary campaign against Hutchinson by piling on the unemployed. Libby Shaw over at TexasKaos has the details and the outrage.Pendejos Perry Says YES to Roads, NO to the Jobless

Mayor McSleaze of McBlogger returns from his holiday to post his thoughts on developments in the Wall Street infotainment industry.

nytexan at BlueBloggin is disgusted, but not surprised, by the new Republican strategy; . As tent cities pop up in Sacramento, unemployment is at 10% in may states and the Wall Street continues a downward slide; the GOP response, to the past 8 year Bush disaster, is to lower approval numbers for Pelosi and House Democrats.

WhosPlayin is focused on local races for Mayor and City Council in Lewisville. This week he interviewed Shelley Kaehr and David Thornhill, who are running for Place 2.

There was harmonic convergence in the left and right Texblogosphere last week. See PDiddie's Brains and Eggs for what happened.

Xanthippas at Three Wise Men takes down the right-wing handwringing and disingenuous criticism over Obama's stem cell decision.
Posted by Mike Thomas at 3/16/2009 No comments: