The AP came out with a thorough and exhaustive analysis of the hacked emails behind the bogus "climategate" non-controversy and concluded that beyond causing some embarrassment for a few scientists, it does nothing to change the overwhelming scientific consensus on the manmade causes of global warming.

E-mails stolen from climate scientists show they stonewalled skeptics and discussed hiding data — but the messages don't support claims that the science of global warming was faked, according to an exhaustive review by The Associated Press.

The 1,073 e-mails examined by the AP show that scientists harbored private doubts, however slight and fleeting, even as they told the world they were certain about climate change. However, the exchanges don't undercut the vast body of evidence showing the world is warming because of man-made greenhouse gas emissions.

The analysis even explains the now infamous email where it talks of using a "trick" to "hide the decline."

One e-mail that skeptics have been citing often since the messages were posted online is from Jones. He says: "I've just completed Mike's (Mann) trick of adding in the real temps to each series for the last 20 years (from 1981 onward) and from 1961 for Keith's to hide the decline."

Jones was referring to tree ring data that indicated temperatures after the 1950s weren't as warm as scientists had determined.

Too bad Jonathan Gurwitz didn't see this before writing his latest regurgitation of wingnut talking points for the Excuse News.
Posted by Mike Thomas at 12/12/2009 No comments:

This is good news.

The U.S. government's move this fall to cut off funding to ACORN was unconstitutional, a federal judge ruled Friday, handing the embattled group a legal victory.

It is especially timely in light of the report that exonerates ACORN of any wrongdoing in the Rightwing sting operation.

It was outrageous that ACORN would get completely cutoff over something so asinine while defense contractor KBR gets not even a slap on the wrist for KBR's disturbing behavior in Iraq where the company detained a rape victim and threatened her with firing if she dared to report the crime committed by other company employees. THAT got no reprimand whatsoever.

However, Sen. Al Franken sponsored legislation to make sure such a disgraceful action never happens again only to have 30 Republican Senators - including Texas Senator John Cornyn - vote against it. That group of 30 is now known as the pro-rape caucus.
Posted by Mike Thomas at 12/12/2009 No comments:

Al Gore does not suffer fools lightly. And there are certainly a lot of fools running about with regards to the global warming issue.
In an interview with Slate Magazine, the former vice president, Nobel Laureate and Oscar winner slaps down the bogus controversy over the hacked emails.

Q: How damaging to your argument was the disclosure of e-mails from the Climate Research Unit at East Anglia University?

A: To paraphrase Shakespeare, it's sound and fury signifying nothing. I haven't read all the e-mails, but the most recent one is more than 10 years old. These private exchanges between these scientists do not in any way cause any question about the scientific consensus. But the noise machine built by the climate deniers often seizes on what they can blow out of proportion, so they've thought this is a bigger deal than it is.

Q: There is a sense in these e-mails, though, that data was hidden and hoarded, which is the opposite of the case you make [in your book] about having an open and fair debate.

A: I think it's been taken wildly out of context. The discussion you're referring to was about two papers that two of these scientists felt shouldn't be accepted as part of the IPCC report. Both of them, in fact, were included, referenced, and discussed. So an e-mail exchange more than 10 years ago including somebody's opinion that a particular study isn't any good is one thing, but the fact that the study ended up being included and discussed anyway is a more powerful comment on what the result of the scientific process really is.

These people are examining what they can or should do to deal with the P.R. dimensions of this, but where the scientific consensus is concerned, it's completely unchanged. What we're seeing is a set of changes worldwide that just make this discussion over 10-year-old e-mails kind of silly. The entire North Polar ice cap is disappearing before our very eyes. It's been the size of the continental United States for the last 3 million years and now 40 percent is gone and the rest of it is going. The mountain glaciers are going. We've had record storms, droughts, fires, and floods. There is an air of unreality in debating these arcane points when the world is changing in such dramatic ways right in front of our eyes because of global warming.

Q: What's your view on the medieval warm period and the charge that the East Anglia e-mails suggest data was manipulated to "contain" that anomaly?

A: I haven't read those e-mails in detail, but the larger point is that there are cyclical changes in the climate and they are fairly well-understood, and all of them are included in the scientific consensus. When you look at what has happened over the last few decades the natural fluctuations point in the opposite direction of what has actually occurred. When they run the models and plug in the man-made pollution, the correspondence is exact. Beyond that, the scale of natural fluctuations has now been far exceeded by the impact of man-made global warming.

And again, we're putting 90 million tons of it into the air today and we'll put a little more of that up there tomorrow. The physical relationship between CO2 molecules and the atmosphere and the trapping of heat is as well-established as gravity, for God's sakes. It's not some mystery. One hundred and fifty years ago this year, John Tyndall discovered CO2 traps heat, and that was the same year the first oil well was drilled in Pennsylvania. The oil industry has outpaced the building of a public consensus of the implications of climate science.

But the basic facts are incontrovertible. What do they think happens when we put 90 million tons up there every day? Is there some magic wand they can wave on it and presto!—physics is overturned and carbon dioxide doesn't trap heat anymore? And when we see all these things happening on the Earth itself, what in the hell do they think is causing it? The scientists have long held that the evidence in their considered word is "unequivocal," which has been endorsed by every national academy of science in every major country in the entire world.

If the people that believed the moon landing was staged on a movie lot had access to unlimited money from large carbon polluters or some other special interest who wanted to confuse people into thinking that the moon landing didn't take place, I'm sure we'd have a robust debate about it right now.

So to summarize, 10-plus year old emails between a couple of scientists discussing two papers as to whether or not they should be included in the IPCC report are the source for this whole kerfluffle being called "Climategate."
And what's more, those two papers were, in fact, included in the IPCC report when all was said and done.
So this whole stink being raised by the climate deniers is bullshit.
But that should be no surprise to anyone who follows their pattern over the years.
Posted by Mike Thomas at 12/10/2009 No comments:

The Mooney News is apparently being cut off from its crazed, cult-leader sugar daddy. The end of the Wash. Times and Rev. Moon's right-wing charity

With the announcement that 40 percent of the Times' staff is getting pink-slipped, and that the daily's no longer even going to bother with traditional who/what/where/when/why reporting, instead publishing an opinion-heavy publication that will be free of charge at a diminished number of local outlets, Times owners look like they're angling to be a Weekly Standard wannabe, churning out lots of predictable GOP Noise Machine opinion prattle. (Paging Andrew Breitbart!) What is clear is that the daily's days as a functioning newspaper are now over. 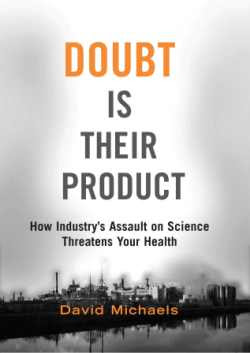 Here is a key quote: "...the industry understood that the public is in no position to distinguish good science from bad. Create doubt, uncertainty, and confusion. Throw mud at the anti-smoking research under the assumption that some of it is bound to stick. And buy time, lots of it, in the bargain". The title of Michaels' book comes from a 1969 memo from a tobacco company executive: "Doubt is our product since it is the best means of competing with the 'body of fact' that exists in the minds of the general public. It is also the means of establishing a controversy". Hill and Knowlton, on behalf of the tobacco industry, had founded the "Manufactured Doubt" industry."
Posted by Mike Thomas at 12/06/2009 No comments: