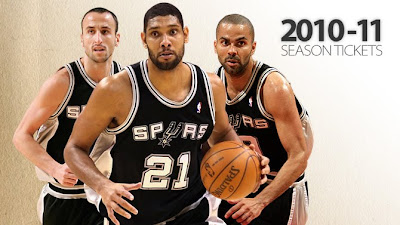 I’ve always considered myself to be a big fan of baseball above any and all other sports. Ever since I was a kid starting out in Little League, collecting baseball cards and rooting for my beloved Cincinnatti Reds of the Big Red Machine era, my enthusiasm for baseball has been very high. But recently it has become apparent to me that while my love of baseball has not abated, it has been eclipsed by a fresh new enthusiasm for basketball.
Perhaps it is due to living for the past 10 years in the largest U.S. city without a Major League Baseball team (or NFL team, for that matter). But I have simply been completely won over by the local pro basketball team, the San Antonio Spurs. I find myself following the Spurs much closer than I have followed any baseball team at least since the 1998-03 Yankees, if not the ‘73-’76 Reds.
I was happy when first the Houston Astros and then the Texas Rangers made their first ever appearances in a World Series these past few years. But I had not really followed either team that closely and couldn’t name most of the players beyond the few standout stars. With the Spurs, however, I find myself following every player, game-by-game, down to the lowliest bench warmer.
Now I’m keenly interested in any news of personnel shifts or trade talks. I look forward to the sports news after the weather and get irritated when the local station leads with news about the Cowboys before getting to the Spurs. I will sometimes read the sports section in the local paper before I turn to the editorial page or even the comics (Gasp!). I try to watch every game I can and record those I can’t for later viewing. I even find myself following all of the other NBA teams and not just the Spurs, rooting for certain teams to lose so that the Spurs will advance further.
It’s clear that I’ve become somewhat obsessed with Spurs Fever, though I’m still not as bad as some. I don’t own a Spurs jersey (though I do have a couple of t-shirts). I don’t drive around with a Spurs flag flying on my car. I don’t wallpaper my cubicle at work with posters and newspaper clippings of the Spurs. I will actually talk about and pay attention to other things that are non-Spurs related. And I won’t be going downtown to celebrate in a mass frenzy should the Spurs win their fifth championship this year.
But still, I’ve got it pretty bad and I suppose that admitting to the problem is the first step in the long road to recovery.
Posted by Mike Thomas at 1/04/2011 No comments: