Democrats will have a big mess to clean up when they take control of Congress in January. The do-nothing Republicans are leaving a big pile of unfinished spending bills for Democrats to deal with when they come back from Christmas break.

GOP leaders have opted to leave behind almost a half-trillion-dollar clutter of unfinished spending bills.

This should serve as the final legacy for this bunch of incompetent, corrupt, worst-all-time lawmakers. The Republicans have clearly demonstrated that they are grossly incompetent when it comes to actually governing the country. We can all be thankful that the grown-ups will soon be back in charge again.
Posted by Mike Thomas at 11/22/2006 No comments: 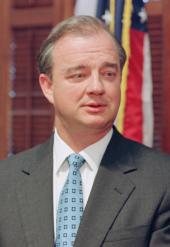 Rumor has it that John Sharp may be gearing up to challenge Sen. John Cornyn in 2008.

Needless to say, I’m thrilled to hear this bit of news. I’ve enthused about Sharp before. I thought he should have run for governor this year and I believe he would have had a better shot at taking down Perry than Chris Bell did.
If Democrats are going to reclaim a Senate seat we are going to have to get a candidate with some built in name recognition. Barbara Radnofsky was great, but she was a total unknown and never had a chance going up against Kay Bailey Hutchison. Cornyn may prove to be invulnerable to, but if 2006 taught us anything it is that we have to keep trying and take every race seriously.
Posted by Mike Thomas at 11/22/2006 No comments:

Go Speaker Pelosi! The new House leader is booting the Republicans out of prime office space that they have been sitting on for more than 50 years.

In something of a break with recent tradition, the incoming Democratic speaker, Nancy Pelosi of California, is planning to expropriate the second-floor suite of offices now occupied by the current speaker, J. Dennis Hastert — a handful of rooms providing a spectacular view of the Mall.

The Democrats may boot Dick Cheney out of his office space too...

Vice President Dick Cheney might also come out a loser in this literal floor fight. Democrats have an eye on an office on the House side that Republicans granted to him as a kind of second home in the Capitol, to complement his office on the other wing of the building, where, by virtue of the Constitution, he presides over the Senate (he has no formal role in the House). Representative Charles B. Rangel, Democrat of New York, is interested in reclaiming Mr. Cheney’s House space for the Ways and Means Committee.

I'm slowly working on updating my blogroll on the lefthand side of the page. I'm clearing out the deadwood blogs that are now defunct, updating those that have changed URLs and delinking a few that I linked because they linked to me but who no longer link to me.

In other bloggy news, Haloscan recently added a nifty feature that allows me to show who has commented most recently over on the righthand side of the page. That is one of the last bells and whistles I had wanted to add to my site and now Haloscan offers it for free. When I started this blog 3+ years ago it was bare bones with nothing much more than text and links. Now I can do all kinds of things like upload pictures, search archives and manage comments that I once thought were only available through fee-based services.

I was also delighted to find out this week that my blog has finally paid off after all this time. The little ads that occasionally run at the bottom of the righthand column have actually generated some revenue and last week the BlogAds service deposited $43 into my Paypal account. WooHoo!
Of course, I doubt my blog would have ever generated even that amount of ad revnue had I not been fortunate enough to be included as a member of the Texas Progressive Bloggers Alliance. I think I have Sean-Kelly of The Agonist to thank for that.
By the way, I heard Sean on the radio this evening (KTSA 550AM) talking to Charles Kuffner of Off the Kuff. I understand he will be on for the rest of the week in the evening slot until the regular host comes back from vacation.
Posted by Mike Thomas at 11/22/2006 No comments:

Kos has a good preview of the 2008 Senate elections which are even more favorable to Democrats than 2006. This was not supposed to be a good year for Democrats. The party had to defend 18 seats compared to just 15 for the Republicans. And yet Democrats held everyone of their seats while winning nearly half of the available Republican seats. Quite remarkable.
In 2008, the odds get even better for the Blue team. Democrats will be defending just 12 seats that year compared to 21 for the Republicans. If the Democrats win the White House that year, they are likely to sweep a number of Senators and Repesentatives into office with them. So we are in a great position for that to happen.

On the presidential side, I’m very confident that the Democrats will retake the White House, especially if Republicans continue to drag their feet on getting us out of Iraq. It is too early for the polls to be of much use, but so far the potential Repubican contenders all have serious flaws that would make it difficult for them to win.
First, there is John “Unindicted Co-conspirator” McCain, of Keating Five fame, who seems to be the GOP front-runner at this point. It will be interesting to see how McCain’s past problems with ethics will play after Republicans gleefully skewered John Murtha for his involvement in a 20-year-old scandal.
Then there is Rudolph Guiliani, who dropped out of his first race against Hillary Clinton because of a sex scandal. What makes him think people will forget all of that? And then there is the fact that he is a liberal on most social issues - pro choice, gay marriage, etc. Are the Republicans just going to pitch the religious fundamentalists overboard?

The Democrats, meanwhile, have Hillary Clinton currently occupying the top spot on the leader board. Whether she will actually run or not is not yet clear, but I think she could very likely win if she does. The Republicans have done their best to villify her and make her out to be some kind of extreme left-wing moonbat, when her moderate voting record in the Senate clearly demonstrates otherwise. In fact, I think Hillary has already been thoroughly vetted to the point that she is inoculated from most attacks that the right-wing smear machine could dream up at this point.
If Hillary runs, I think she will tap someone like Evan Bayh as her running mate. Barak Obama needs more seasoning and should serve a couple of terms in the Senate before making his move.
Posted by Mike Thomas at 11/21/2006 No comments: