A lot of bad bills bit the dust last night up in Austin and I couldn’t be happier.

Casino gambling crapped out. Texas hold ’em had to fold ’em. Hands-free cell phones in cars crashed. And handguns on campus bit the bullet as the first major legislative deadline started killing bills.
All were pieces of House legislation that had to be debated by midnight Thursday or else hope of passage in this year’s legislative session vanished under House rules heading toward the June 1 closing.

I’m most especially happy to see the heinous “Guns and Campus” legislation get deep-sixed. I’m am terribly frustrated with Sen. Jeff Wentworth, R-San Antonio, for sponsoring the Seante version of that bill. Wentworth is someone who I have long respected in spite of his being on the other side of the political aisle from myself. But this bill was too much. My wife teaches on a college campus and the last thing I want is for her to have to be in a classroom with a lot of stressed-out, gun-toting students.
I am also no fan of gambling because far from being a panacea of resources for cash-strapped governments, it tends to prey on the poor, the desperate and the downtrodden. And social problems aside, it does nothing to contribute to the economy other than suck up discretionary spending money that people might have used more beneficially elsewhere.

I once thought Texas was kind of backwards for having just a part-time Legislature that meets only every other year. But seeing the bad bills that come out of Austin these days, I am thankful that they don’t have more time to get stuff like this passed.
Posted by Mike Thomas at 5/15/2009 No comments:

Being realistic, cold and clear-eyed

Steve Benen points to a comment on Andrew Sullivan’s site which does a good job of spelling out my take on the whole torture prosecutions debate:

Imagine what such prosecutions would entail: years of courtroom drama, depositions, lawsuits and counter-suits; the long parade of powerful and high ranking ex- and current members of government, including a goodly number of Democrats, being called on the carpet and having to testify against one another; the enormous rancor and bitterness. This would be Watergate on steroids. And imagine the shot in the arm this would give the zombified Limbaugh Right.
The prosecutions you are asking for would simply swallow the Obama presidency whole. It is the kind of energy draining, oxygen consuming drama that is the nightmare of every president. It would come to define his presidency in the same way the Hostage Crisis defined Carter’s and there is zero chance he will opt for this.
President Obama is making a realistic, cold, clear-eyed cost-benefit analysis. This is the choice: Does he fix the economy, fix healthcare, get a handle on the two wars he’s dealing with, or does he prosecute Bush era war crimes? He has chosen his agenda and is asking us to choose that to.

I agree. Obama can’t allow his agenda to be sidetracked by the inevitable media circus that would result from launching such prosecutorial pursuits. I don’t care if Congress conducts its own investigations - which they are already doing - but Obama needs to keep his focus on the problems at hand. There will be plenty of time later to deal with this. Heck, we’re still deporting Nazis from WWII!
But the last thing I want is for Obama’s efforts to fix the economy to be impeded and have him not be able to accomplish the things he needs to do during his first term. The worst thing that could happen is to have Obama get bogged down in something like this, accomplish nothing and then we end up with a Republican Congress and President Mitt Romney in four years.
Posted by Mike Thomas at 5/15/2009 No comments:

Today the Republicans in the U.S. Senate managed to filibuster President Obama’s nominee for the No. 2 post at the U.S. Department of Interior. The nominee, David Hayes, previously served in the Clinton administration and is well qualified for the post. There is nothing controversial about him whatsoever. And yet, Republicans voted in lockstep to filibuster Hayes’ nomination because some Western state Republicans are upset with the Obama administration’s decision to cancel some oil and gas leases in Western states.
First off, this nonsense has got to stop. The filibuster was once a weapon of last resort for the minority party that would be trotted out only on very rare occasions. But in recent years, it has become common place to the point that every single vote in the Senate now has to be passed with a super-majority of 60 votes.
This just isn’t right. In fact, it is completely upside down. Let’s look at the vote on the Hayes nomination. It was 57 to 39 - thus Democrats were three votes short of breaking the filibuster - Ted Kennedy is out sick, John Kerry was attending a U.S. soldier’s funeral, and Al Franken is being blocked by sore loser Republicans in Minnesota.
But what about this 39 votes on the Republican side?!? They couldn’t come up with 41 votes in opposition? And yet they still succeeded in blocking the nomination?? How is that fair?
At a bare minimum the rules for filibusters should be changed to put the onus on the minority party to come up with 41 votes to support the filibuster, rather than always forcing the majority to line up 60 votes to knock it down. If the minority party can’t muster 41 votes on a cloture rule, the filibuster should be declared void and the nomination should immediately go to a full up-or-down vote. End of story.
It is simply unfair and undemocratic to do it any other way.
Posted by Mike Thomas at 5/13/2009 No comments: 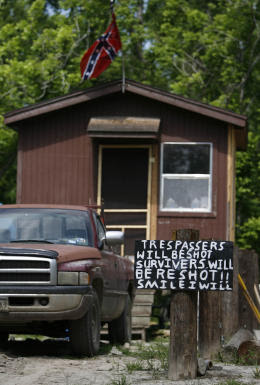 There was a truly horrific story in the Houston Chronicle over the weekend. A family that had gone out on a dirt road to swim at a levy were shot at by a couple who claimed they were trespassing. A 7-year-old boy is dead now as a result.
The story is infuriating because it was so senseless. You look at the picture of the couple that did the shooting and the place where they were living - complete with Confederate Flag and a grammatically-challenged sign that reads “Trespassers will be shot. Survivers will be reshot!! Smile I will.” - and one is immediately struck with the worst stereotypes of backward, ignorant, Redneck, white trash.
Where did these people get the idea that they could just go up and shoot anybody who stumbles onto their property? Do they sit around all day listening to rightwing hate radio? Do they get riled up by Rush Limbaugh and Sean Hannity and Glenn Beck and then feel justified to go out and do exactly what their misspelled sign says?
What is the difference between this couple and some minority gangbangers in an urban slum who shoot at people for being in their “territory” without permission?
This was a horribly senseless tragedy. A boy is dead. A family is devestated and this couple will now spend the rest of their worthless lives in jail, assuming they don’t get the death penalty.
Posted by Mike Thomas at 5/11/2009 No comments: