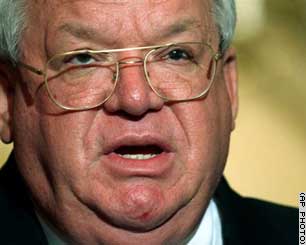 If he were the leader of my party, I would want him gone. But for purely partisan political reasons, I hope that Denny Hastert sticks it out and remains in his position as Speaker of the House.
The longer Hastert remains in office, the longer this Mark Foley scandal will play out in the media. Questions about what Hastert knew and when will continue to be raised along with speculation that the Foley situation was purposefully kept under wraps to protect a Republican-held Congressional seat during an election year.
The fact that the Democrat on the House Page panel was kept in the dark about the Foley e-mails is the clearest indication that it was part of a cover-up. There is no other explanation. They were obviously concerned that the Democrat on the panel would not have the same partisan motivation for keeping the Foley story under wraps and might leak it to the press in an effort to damage his re-election chances. So they purposefully did not tell him about it.
So that is really all you need to understand about this situation. If it had been left up to the House Republican leadership, we would know nothing about this scandal today and Mark Foley would still be a member of Congress, free to pursue cybersex relationships with more high-school age children at the Capitol. That’s despicable and there is no way they can soft peddle it, blame it all on Bill Clinton, or anything else.

Hastert's decsion to stay put may be short-lived if too many more polls like this come out:

Said the source: "The data suggests Americans have bailed on the speaker. And the difference could be between a 20-seat loss and 50-seat loss."

The source also said "the internal data had not been widely shared among Republican leaders, but as awareness of it spreads calculations about Hastert's tenure may change. The source described the pollster who did the survey as 'authoritative,' and said once the numbers are presented, it 'could change the focus' on whether the speaker remains in power."

(Sniff! Sniff!) Do you smell sulfur?

It looks like the Prince of Darkness himself made a stop in San Antonio the other day. Vice President Dick Cheney poked his head out of his undisclosed location to briefly offer support for one of his minions - Congressman Henry Bonilla.

The vice president's hour-plus appearance before 110 GOP supporters raised more than $200,000 for Bonilla

But as one would expect with a visit from the devil, trouble follows where ever he goes:

the vice president's visit here wasn't all upbeat.
The visit triggered a traffic nightmare for motorists caught in jams as police cordoned off streets and U.S. 281 exits to allow his nine-vehicle motorcade to maneuver unimpeded.

Cheney has worse approval ratings than President Bush, and that is not easy to do these days. So I hope he gets out and campaigns for more and more Republicans these next few weeks.
Posted by Mike Thomas at 10/04/2006 No comments:

The See No Evil Party

I was glad to see there are some conservatives who are at least as disgusted by the Foley scandal as I am.

If Hastert and other members of the House leadership knowingly covered up for a pedophile, then they should step down from the leadership.  They have lost the credibility and trust needed to lead.

But they still want to give themselves wiggle room that they would most certainly not grant if the accused was a Democrat being protected by Democratic leaders in the House:

If, however, he saw some emails that were not nearly so cut and dry pedophilia but were clearly inappropriate, then I might cut him some slack.

I think it is clear that there were enough red lights going off early on to warn about Foley’s behavior that waiting for sexually explicit IMs to show up was a failure of leadership. I think it would not have taken too much prodding to find the nastier stuff, but they didn’t want to find out about it and thus chose not to look. That is inexcusable.