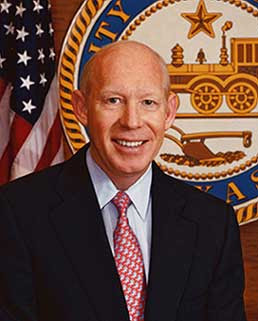 I cast my vote today in the Democratic primary. Most of the excitement seems to be taking place on the Republican side and I was somewhat tempted to cross lines and cast a vote for moderate Republican Tim Tuggey in the Board of Education race just to get that lunatic Ken Mercer off the board.
I voted for Bill White for governor and it was no contest as far as I am concerned. Farouk Shami may have good intentions, but he is just another wealthy businessman who thinks he should start at the top rather than working his way up through the system. Bill White is clearly the most experienced and best qualified candidate to take on Governor-for-life Rick Perry.
Kay Baily Hutchison is toast.
She is also a liar. I don’t believe for a second that she is going to give up her Senate seat. I’m sure that shortly after she gets smoked in the gubernatorial primary she will announce that Texas needs her back in Washington and then slink away. That will be a real shame because Texas could sure use a good person in the Senate like John Sharp.
Our other U.S. Senator, John Cornyn, just demonstrated once again how much of an extremist, rightwing, teabagging nutjob he has become by defending the mentally unstable Senator from Kentucky Jim Bunning in his abuse of the filibuster rules to block a temporary extension of unemployment and COBRA benefits for out of work Americans.
The only real choice I had to make was in the Lt. Gov. race between former Austin DA Ronnie Earle and labor leader Linda Chavez-Thompson. I went with Earle largely because he didn’t blow off the League of Women Voters Guide like Chavez-Thompson did. Bad move Linda.
I am very much interested in the Republican primary race for the 23rd Congressional District where about a half dozen Republicans are vying to take on Ciro Rodriguez this fall. I halfway expect Quico Canseco to win because he has run before and has the benefit of name recognition. Will Hurd, a 30-year-old “retired” CIA agent, made the Express-News editorial board swoon and won their endorsement. But the one I am watching the closest is Dr. Robert Lowry, whose biggest claim to fame is that he received the endorsement of CPAC straw poll winner Ron Paul. Lowry is a far-right socal conservative with some Libertarian tendencies (he favors legalization of marijuana, for instance) and we are polar opposites on almost every issue, but he is in my Sunday School class at University United Methodist Church and I’ve gotten to know him and his family during the past few months. So, while I think he is a little bit out there (OK, a WHOLE LOT out there), I at least know him to be a really nice person and if anybody were to beat Ciro (God forbid) it might as well be him. Still, if he loses then at least I won’t have to feel guilty about voting against him in November.
Posted by Mike Thomas at 3/02/2010 No comments: