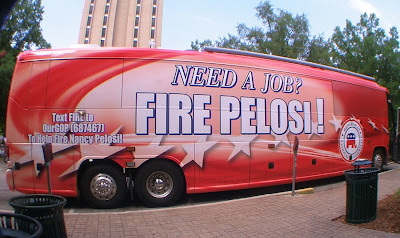 Well the midterm election was every bit as bad as I had feared.
There were only a few bright spots to cheer me up such as the losses by Tea Party stalwarts Christine O’Donnell, Ken Buck, Joe Miller and Sharron Angle.
There were the heart-wrenchingly close losses by Joe Sestak in Pennsylvania and Alexi Ginniaoulis in Illinois; Alex Sink in Florida and Ted Strickland in Ohio.
And there were those who just squeaked by such as Michael Bennett in Colorado, Patty Murray in Washington and Joe Manchin in West Virginia.
Harry Reid held on in Nevada while Russ Feingold was toppled in Wisconsin.
Some Democrats weathered the storm with little problem. Richard Blumenthal easily held on to Chris Dodd’s seat in Connecticut. He had been the state’s attorney general when I lived there in the early ‘90s and was being touted even then for higher office. Glad he finally made it.
Chuck Shumer and Kristin Gillibrand had little trouble keeping their New York Senate seats and Andrew Cuomo steamrolled over the obnoxious extremist Carl Paladino. Vermont elected a Democratic governor for the first time since Howard Dean. And Connecticut elected a Democratic governor for the first time since I don’t know when. Since I lived there the state house has either been held by an Independent or a Republican.
Jerry Brown easily reclaimed the governors office in California that he held 20 years ago despite a mountain of money spent by his Republican opponent Meg Whitman. And Barbara Boxer withstood a multi-million dollar campaign by former HP CEO Carly Firorina.
But elsewhere the tidalwave of corporate cash was too much for Democrats to withstand. The U.S. Chamber of Republicans spent millions of dollars to defeat Democrats all across the country dipping into a big pool of corporate cash that was supplemented by donations from foreign entities. And it was all carefully orchestrated by Rupert Murdoch’s Faux News and the rightwing radio jocks who instructed their brainwashed minions that voting for Democrats was unpatriotic and unAmerican.
Republicans picked up more than 60 seats in the House giving them control again after just four years out of power. During that time, House Speaker Nancy Pelosi accomplished a tremendous amount - only to have the bulk of her legislative achievements watered down or buried in the Senate where Republicans took obstructionism to new heights by misusing and abusing that institution’s archaic filibuster and hold rules. But even with all the obstructionism, Democrats somehow still managed to pass major pieces of legislation such as health care reform and banking/finance reform.
But ultimately by abusing Senate rules the way they did, Republicans have set the new standard that Democrats will follow meaning that no partisan legislation will pass without a 60-vote supermajority. Even relatively benign, non-partisan legislation will have to meet the 60-vote threshhold each time because in essense every piece of legislation and, indeed, every action the Senate takes is now dictated by an unspoken filibuster rule.
So what that means is that the Republican takeover of the House will result in near total gridlock. The Republicans have swelled their ranks with radical Tea Party extremists who have some seriously flawed and absurd views of the government and who will insist on stopping even the most basic functions of government on the grounds that it doesn’t pass muster with their fundamentalist reading of the Constitution. As such, there will be little room for compromise as Republicans continue to adopt the “My way or the highway” attitude. They will insist that Democrats kowtow to their demands and be submissive in light of the fact that “the people have spoken!” Nevermind the fact that Republicans themselves did nothing of the sort during their time in the minority, which, by the way, was an even tinier minority than Democrats have now.
And will Obama now be a “lame duck” president and cast aside his agenda in deference to the newly empowered House Republicans? Was Ronald Reagan a lame duck in 1982 after his party shrank down to just 166 seats in the House? Of course not. As everyone well knows, Reagan went on to win a landslide re-election two years later and reshaped the political landscape for the forseeable future. So people who want to count Obama out at this point need a serious history lesson.
I think the thing that was the most disheartening about the election was the Republican onslaught in local races. I really hated losing my local congressman Ciro Rodriguez. After spending most of my adult life being represented by Republicans like Joe Barton, Lamar Smith, Larry Combest and Henry Bonilla, I was thrilled four years ago to finally get someone to represent me who I could relate to. But now I will be stuck once again with someone who will automatically vote against everything I deem to be important. It is very depressing.
But, alas, the tide will turn again at some point and in the meantime I will just have more things that I can gripe about on my blog. So if there is any silver lining in this election it is the endless fodder of blog material that it will bring for the next two years.
Posted by Mike Thomas at 11/04/2010 No comments:

I cast my vote today for Bill White for governor and Ciro Rodriguez for Congress. Those were the two “big” races I had a say in.
In addition, I supported mostly Democrats all the way down the ballot with the exception of Susan Combs, the Republican comptroller, who did not have a Democratic opponent but was facing candidates from the Libertarian and Green parties. Since I think most Libertarian candidates are a bit nutty and because all (Get Republicans Elected Every November) GREEN Party candidates are dupes and imbeciles, I cast my vote for Combs. Besides that, I’ve always thought she was a nice person and she seems to have done a decent job in a relatively non-partisan office.
Beyond that, I voted for Carlos Uresti for state senate, Massarat Ali for state representative and Rebecca Bell-Metterau for state board of education.
After that, I had little interest in the remaining races and feel that most of them should be appointed or hired positions anyway.
Posted by Mike Thomas at 11/02/2010 No comments: 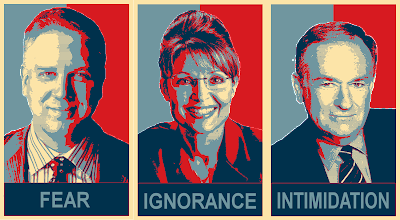 I guess it is appropriate that the election falls so close to Halloween this year because it promises to be a real horror show. Even though a few of the Tea Party’s scariest candidates don’t have a chance of winning – like Christine “I’m not a witch” O’Donnell and Carl “I’ll Take You Out” Paladino — there are plenty of others like Sharron Angle in Nevada, Rand Paul in Kentucky, Joe Miller in Alaska and Ken Buck in Colorado who have a very good chance of winning. And then there are the ones who are already shoo-ins for election like John Boozman in Arkansas and Mike Lee in Utah.
Suffice to say that the Senate is going to get a lot crazier even if it stays majority Democratic. But the really sad news is what is likely to happen to the House. A Republican takeover in the House, which seems all but assured, pretty much guarantees legislative gridlock for the next two years. What this means is that any kind of progress on legislative issues will be stymied and, worse, there will most likely be a number of confrontations over the debt ceiling and threats to shut down the government. At the same time, we can all enjoy the spectacle of partisan witchhunts as Republican lawmakers use their new powers to pursue vendettas against the Obama administration.
What is hard to understand is why people would want to choose this course. I chalk it up to flat-out ignorance mixed with a good deal of Faux News/Wingnut Radio brainwashing.
‘Unfair,’ you say! Perhaps in some cases there are people who have thought these things through and believe for their own reasons that it would be best to return to the policies of the previous 10 years. But some recent studies have revealed that too many people seem to be seriously confused about some of the key issues.
Steve Benen addresses those studies here and here.

In a democracy, the system breaks down and produces counter-productive results when those in charge -- the voters -- are uninformed. And the fact is, a whole lot of Americans are deeply confused about the facts.
The Obama administration cut taxes for middle-class Americans, expects to make a profit on the hundreds of billions of dollars spent to rescue Wall Street banks and has overseen an economy that has grown for the past four quarters.
Most voters don’t believe it.
A Bloomberg National Poll conducted Oct. 24-26 finds that by a two-to-one margin, likely voters in the Nov. 2 midterm elections think taxes have gone up, the economy has shrunk, and the billions lent to banks as part of the Troubled Asset Relief Program won’t be recovered.
Public perceptions aren’t even close to reality -- by a 52% to 19% margin, for example, likely voters think their federal tax burden has gone up over the last couple of years, even though it hasn’t. Indeed, Democrats approved one of the largest middle-class tax cuts in American history, and the public has no idea that it even happened.
The same is true of the strength of the economy in general -- the economy stopped shrinking and started growing more than a year ago, but 61% of respondents in this poll said the economy continued to shrink in 2010, even though it hasn’t.

Needless to say, it is hard to win an election when people are this confused about things.
And then there is this...

So people think taxes have gone up when they have not. They think the economy is worse than it really is. And they think Congress has done very little when it has actually accomplished more than any other Congress before it.
When people go to the polls holding such backwards and upside down assumptions, it is no wonder that they end up voting against their interests.
All I can say is that the rightwing campaign to keep people ignorant and misinformed has been highly effective. Rush Limbaugh, Glenn Beck, Sean Hannity, Bill O’Reilly, et al. are very, very good at their jobs. That is why they get the big bucks, no doubt.
Meanwhile, the rest of us are going to end up with a country that is hamstrung and dysfunctional for the next two years, if not longer. It is highly depressing especially after the promise of what could have been after the big blowout Democratic victories in 2006 and 2008.
But Republicans managed to hold fast even with one of the smallest minorities in history and by massively abusing Senate rules on filibusters and secret holds. Thus they were able to stall, stymie and kill large numbers of bills and change others far beyond what would have easily passed on a straight-up, majority vote.
So the new standard now is that 59 votes in the Senate is not enough to do anything, therefore nothing will get done until we actually get a party with a lopsided majority in Congress or until reason and rationality breaks out and we finally reform the Senate’s antiquated and undemocratic (not to mention unconstitutional) filibuster rules.
Alas, the former is much more likely to happen in my opinion before the latter.
Good luck, my fellow Americans. We are all going to need it.
Posted by Mike Thomas at 11/01/2010 No comments: