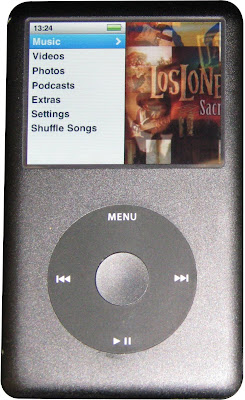 I saved up my birthday money from the past two years and bought myself a new iPod. My old iPod, which I treasured, was an iPod mini and had just 4GB of space. That is about 1,000 songs worth and when I got it, it seemed like plenty. But after awhile I began to want more. I created a Great Songs list that had a broad mix of rock, country and jazz with lots of Beatles, Bob Dylan and Bing Crosby as well as the Ken Burns Jazz collection. But then I began to get into classical music and the more classical pieces I would add to the iPod, the more of the other songs I would have to pull off. Before long I had nothing but classical music on my iPod and even then not enough room for all that I wanted to put on it. Plus, I should note, my iPod mini did not have video capability, not that I would have had room for any videos anyway.
So I solved all those problems with my new iPod which has 160GB. Let me repeat that.... 160 GB. Wow! Now I have all my music on my iPod, and I do mean ALL of my music - or at least all that I want to put on it. ALL of my classical music - and I've got a lot of classical music after spending the past year raiding the San Antonio Public Library for everything it has to offer. I've got all my Ken Burns Jazz collection plus lots more jazz music to boot; I've got all of my Beatles, Bob Dylan, Bruce Springsteen, Bing Crosby and the Police. I've got almost my entire rock collection, most of my country and folk collection, even my collection of Broadway musicals. I may eventually put my Christmas music on there too as the holiday gets closer. So far I have more than 10,000 "songs" on the iPod.
And then there are the videos. I have two movies which came with digital copies that I had no use for previously and now I have loaded on my iPod - Tim Burton's Alice in Wonderland and the 2010 version of Karate Kid, both of which are pretty good movies. And I have downloaded half a dozen free TV episodes off of iTunes mostly to entertain my kids - several cartoon shows, a National Geographic special and an episode of Top Gear. And I have a whole mess of Podcasts that update everyday including NPR news updates, lots of old time radio shows and the entire Rachel Maddow show downloaded everyday. On top of all that I have downloaded all the digital pictures from my computer at work - mostly pictures of my kids.
But the best part is that even after all of that, I still have more than 67 GB of free space on my iPod.
I agree completely with this article in the Economist.
The iPod is definitely the best thing Steve Jobs ever did. While it would be nice to access the Internet or make phone calls, I would never give up my iPod for an iPhone or an iPad. Having all my music in one place, easily accessible by searing or playing randomly is just too much fun.
Posted by Mike Thomas at 8/27/2011 No comments: