Closing The Book On The Bush Legacy - The Atlantic Politics Channel

Closing The Book On The Bush Legacy - The Atlantic Politics Channel
Thursday's annual Census Bureau report on income, poverty and access to health care-the Bureau's principal report card on the well-being of average Americans-closes the books on the economic record of George W. Bush.

It's not a record many Republicans are likely to point to with pride.

On every major measurement, the Census Bureau report shows that the country lost ground during Bush's two terms. While Bush was in office, the median household income declined, poverty increased, childhood poverty increased even more, and the number of Americans without health insurance spiked. By contrast, the country's condition improved on each of those measures during Bill Clinton's two terms, often substantially.

The Census' final report card on Bush's record presents an intriguing backdrop to today's economic debate. Bush built his economic strategy around tax cuts, passing large reductions both in 2001 and 2003. Congressional Republicans are insisting that a similar agenda focused on tax cuts offers better prospects of reviving the economy than President Obama's combination of some tax cuts with heavy government spending. But the bleak economic results from Bush's two terms, tarnish, to put it mildly, the idea that tax cuts represent an economic silver bullet. 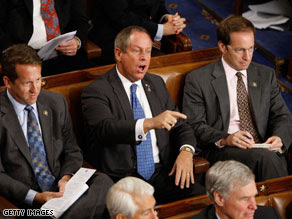 A Republican House member shouted "You lie" during President Obama's health care speech to Congress on Wednesday, and members of both parties condemned the heckling.

What has become of the Republican Party? It has obviously been replaced by the Tea Party and its legion of screeching, wild-eyed radical lunatics. How can people even consider putting these mindless imbeciles back in charge of our government?
Posted by Mike Thomas at 9/10/2009 No comments: 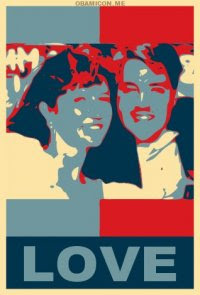 Ever since I signed on to Facebook a few months ago I have been overwhelmed by the number of old friends, past co-workers and distant (geographically) relatives I’ve been able to reconnect with, even if it is just to find out where and what they are doing some 20 to 30 years later.
But an added consequence of finding old friends is that you lose some as well. By that I mean that I have learned that some old friends from long ago have passed away. One person died in a car wreck, another had a heart attack. Although they died years ago, I had been oblivious to their passing until just recently when I reconnected with old friends who had kept up with them better than I had.
But perhaps the most wrenching experience has been the very recent death of Steve Damm, who I hardly knew at all. Steve passed away over the Labor Day weekend from a form of brain cancer.
I knew Steve mostly through his wife, Tyra, when we worked together for a short time at the Lubbock Avalanche-Journal. They were a young couple without kids and went to the same church that we did. I met Steve maybe half a dozen times at various work-related social functions. Then they moved to Dallas and we moved to San Antonio. End of story.
Except that when I got onto Facebook I hooked back up with a bunch of my old A-J co-workers, including Tyra, and in that way learned of their nearly two-year struggle with Steve’s brain cancer. Tyra is now a columnist with the Dallas Morning News and was documenting their ordeal through her columns, blogs, Twitter and Facebook. It was all quite remarkable. You couldn’t help but be pulled into their daily struggle. And what really hit home the hardest for me was that they now have two young children, nearly the same age as my own - a boy just entering second grade (my son just entered first grade) and a girl in pre-K about age 4 (my daughter is 3).
You can follow and retrace Tyra and Steve’s remarkable journey here.
Funeral services for Steve are set for this Saturday in Dallas.
Posted by Mike Thomas at 9/09/2009 No comments:

The things that rightwingers freak out about grows increasingly bizarre everyday.

Video of the Day

Cartoon of the Day

In light of the ongoing discussion between Mark and Ann in comments, I thought this cartoon was wholly appropriate. 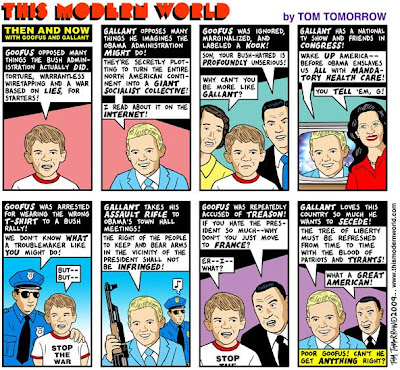