I’ve complained about this before, but it continues to grate on my nerves. The San Antonio Express-News opinion section is heavily weighted in favor of conservative, Republican commentators. And most of the rest of the space is filled up with fluff pieces by apolitical lightweights.
Actual opinion pieces by true liberals and/or Democrats are few and far between.
I was reminded of this again today by this piece taking the latest Maureen Dowd column to task. Dowd, is one of several New York Times columnists featured regularly on the pages of the Express-News. And many people might mistakenly believe that she counts as a “liberal” when measuring the balance of commentary on the opinion pages. Au contraire. A careful reading of her columns, as the linked article attests, shows that she spends most of her time harping on Democrats and is certainly no advocate of liberal political causes.
George Will, on the other hand, IS an advocate for conservative and Republican causes and this week we get a double dose of his commentary. Here is the rundown on commentary pieces in the E-N so far this week. (I have placed an R next to the names of those I feel advocate Republican positions, an I for those who tend to be Independent or apolitical and a D for those who sometimes advocate Democratic positions.)

So out of 10 columns in three days we have exactly three that are not penned by conservative pundits and/or McCain supporters. So what do we have supposedly representing the left side of the spectrum?
Kathy Clay Little, who has never expressed an opinion one way or the other about Barack Obama, lauds a local black community leader.
Maureen Dowd uses her column to pile on John Edwards in the aftermath of his sex scandal admission.
And Ellen Goodman’s column is about picking berries in Maine and reminiscing about recently departed relatives.
So much for that.
And tomorrow is typically a conservative lovefest with columns by local rightwinger and warhawk Ken Allard and syndicated wingnut Cal Thomas.
The fun never ends.

Update
For Thursday we got:
The Clinton-bashing, Democratic convention-trashing Maureen Dowd column that was skewered in the link above - I
David Brooks - R
Ken Allard - R
Cal Thomas (online) - R

And Saturday must be D-Day for the E-N because we actually get two Democratic columnists on one day. Woohoo!
Garrison Keillor - D
Leonard Pitts - D
Gloria Padilla - I
Cal Thomas (online) - R

Of course, Pitts' column this week is about the Edwards' sex scandal and comparing it to Clinton, thus it is nearly indistinguishable from all the rightwing columnists this week.
And, yes, local columnist Gloria Padilla most definitely gets at 'I' for inconsequential next to her name. Padilla really sticks her neck out with her colunm this week advocating more parental involvement in their childrens' education. Yep, that's sure to drum up some controversy. Next week I think she is writing a column advising kids to eat their vegetables and brush their teeth every night.
Posted by Mike Thomas at 8/13/2008 No comments:

A guy walked into the Democratic Party headquarters in Arkansas and reportedly shot the state chairman, sending him to the hospital in critical condition, and then led police on a wild car chase before being shot and apprehended himself.
No more details so far, but I hope this isn’t another case of a domestic terrorist attack by some guy who hates liberals like the Unitarian Church shooting in Tennessee a few weeks ago.
Posted by Mike Thomas at 8/13/2008 No comments:

Obama vs McCain on music

Political Wire reports on an item from Blender listing the presidential candidates “favorite” songs. You can be sure that these lists were put together by campaign strategists with the intent on reaching out to certain constituency groups and only vaguely reflect the actual musical tastes of the candidates. But I think they are interesting none the less:

John McCain
1. Dancing Queen ABBA
2. Blue Bayou Roy Orbison
3. Take a Chance On Me ABBA
4. If We Make It Through December Merle Haggard
5. As Time Goes By Dooley Wilson
6. Good Vibrations The Beach Boys
7. What A Wonderful World Louis Armstrong
8. I've Got You Under My Skin Frank Sinatra
9. Sweet Caroline Neil Diamond
10. Smoke Gets In Your Eyes The Platters

Obama’s list is heavily weighted towards rock, R&B and hip-hop, but they are careful to throw in a Frank Sinatra tune to appeal to the older generation. Frankie turns out to be the only crossover between the two lists.
Obama’s list is also weighted towards black artists with six of the 10 falling into that demographic group compared to just 3 of 10 on McCain’s list. Obama has three female artists counting the Fugees, while McCain has just one if you count the double dose of Abba.

Both lists are, in fact, carefully balanced in their own way. Obama has three contemporary black artists - Fugees, Nina Simone and Kanye West; and two classics - Marvin Gaye and Aretha Franklin.
Then we have two classic rock picks - Bruce Springsteen and The Rolling Stones; and one contemporary rock by U2 (which also classifies as classic sometimes).
Then they throw in the YouTube hit by will.i.am that features Obama himself giving an inspirational speech.
The Sinatra selection is the oldest song on Obama’s list followed by the Rolling Stones and Aretha Franklin in the 60s and Marvin Gaye from the 70s. Everything else is more current.

McCain’s songs, by contrast, are very much older with nothing dating more recent than 1977. Apparently McCain’s interest in music died with disco.
He has a particular fondness for Abba with two of their songs making his list. Their 1977 disco smash “Take A Chance On Me” is the most recent song on his list followed by Abba again in 1975.
The Neil Diamond and Merle Haggard songs both date to the late ‘60s as does the Louie Armstrong song, while the Beach Boys are mid ‘60s. Then we have Roy Orbison and The Platters dating back to the ‘50s followed by Doolie Wilson and Frank Sinatra going back even further.
And yes, Doolie Wilson played Sam in “Casablanca” which is where he sang the song “As Time Goes By.”
Merle Haggard is the only country artist on either list (I’m sure Bush would have picked quite a few more) and neither candidate picked anything by The Beatles.
Posted by Mike Thomas at 8/12/2008 No comments: 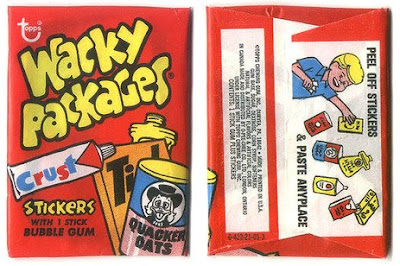 Wow. This brings back memories.

At 9 years old, I became hooked on the Topps-brand sticker series of product parodies, which recast Cap'n Crunch as "Cap'n Crud" and Nestle's Quik as "Nutlee's Quit" ("Explodes Instantly with Milk").

I can’t say they had as much influence on me as they did on that writer, but I do recall buying packs of those stickers in the early ‘70s when I was 7-8 years old. My source was the concession stand at the baseball fields where I played Little League games.
My biggest regret now is that I didn’t save the money I blew on Wacky Packs and buy more baseball cards from 1973-74. I don’t have any of the Wacky stickers left because I peeled them all off and stuck them on an old filing cabinet that was in my bedroom. I no longer have that filing cabinet or the stickers, but I still have my baseball cards.
But for those who missed out on this cultural phenomenon, it looks like Wacky Packs are making a comeback.
Fortunately, my kids are still too young to have any interest in such things. But I’m sure in a few more years there will be things equally inane for them to waste their money on and then have fond nostalgic recollections about years later.
Posted by Mike Thomas at 8/12/2008 No comments: 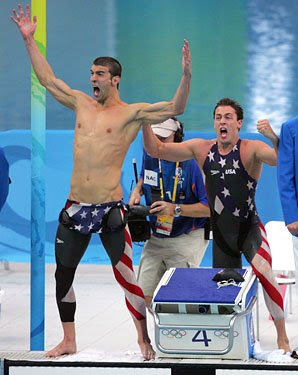 Last night I saw one of the most thrilling swimming relays ever as the U.S. Men’s team won the gold by slipping by France at the very end of the race by less than a second. The victory gives Michael Phelps his second gold of the Beijing Olympics and keeps him on track to match Mark Spitz’ record for the most gold medals in one year.
The final lap in that race will be talked about for years to come as the “old” guy on the team - Jason Lezak age 32 - somehow overcame nearly half a body length in the final half lap to slip into first place.
But you wouldn’t know any of this by reading the San Antonio Express-News today. The E-N sports editors were clearly unimpressed with that historic performance and relegated the story to the inside pages. Instead, they highlighted the U.S. Men’s Basketball team’s first round victory over China. No doubt they did this because they could run a big photo of Kobe Bryant dunking the ball over Yao Ming. (Yawn).
I could really care less about Olympic basketball these days. I liked it better when we filled our team with the best college players. But now that we fill the team with ringers it has become a pathetic media spectacle and no fun to watch - boring when we win, an embarrassment when we don’t. Who needs that?
Long after everyone has forgotten which overhyped superstars filled this particular Olympic basketball squad, we will still see replays of the final leg of that swimming relay and wonder how the heck he did it.
Posted by Mike Thomas at 8/11/2008 No comments:

refinish69 was happy to introduce a real progressive Democrat to the readers of Doing My Part For The Left a few weeks ago but has to wonder how to describe Mike Skelly: Democrat or Republican Lite?

Vince at Capitol Annex takes a look at the Texas State Teacher's Association lawsuit against the Texas Education Agency for giving public funds to private institutions.

Julie Pippert at MOMocrats asked, "Offshore drilling---whose issue is it anyway? The people's? Or the politician's?"

Women who enter the military know they may encounter danger along the way, just as their male counterparts do. Diarist Liberal Texas at Texas Kaos highlights an additional danger they face in Assault on Women in the Military, and calls on all of us to ensure that our fighting women are protected from sexual assault from the companions they should be able to trust.

WhosPlayin used to think John McCain was worthy of respect, even if wrong on issues. But mocking conservation and lying about Obama raising taxes show who John McCain really is.

jobsanger thinks Democrats should let Clinton's backers have their vote at the convention, and believes Barack Obama has a chance to win Texas this November.

Neil at Texas Liberal talks about AIDS and African Americans.

Due to purchase of McBlogger by a rival blogging firm, the regular writers are on strike. This week, we'd like to introduce you to a new McBlogger, Rose
Petal.

Off the Kuff takes a look at The Queue behind KBH for her maybe-to-be-abandoned Senate seat.

YaGottaLoveIt of South Texas Chisme urges Barack Obama to have a fundraiser for money that stays in Texas while urging Hillary Clinton to campaign for Rick Noriega in South Texas.

Tropical Storm Edouard was more like a decent rainstorm, but that didn't stop the media -- old as well as new, including madcap reporter/Congressman John Culberson -- from building it up to a height it could no more sustain than its winds. PDiddie at Brains and Eggs has the roundup of the hyperventilating in Houston.

nytexan at BlueBloggin points out, as the Gerogia Russia war continues and Bush plays with U.S. athletes at the Olympics, Could The U.S. Get Pulled Into Georgiaís War?

XicanoPwr discusses the immigration survey that was sent presidential candidates Obama and McCain put together by The Sanctuary, a web base grassroots community of pro-migrant, human rights, and civil-rights bloggers.
Posted by Mike Thomas at 8/11/2008 No comments: