Life Is A Rock 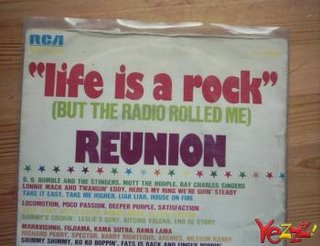 I found this on You Tube. It’s essentially a humorous music video to go along with the song “Life is a Rock” by Reunion. I had a truncated version of the song on a 1974 Ronco record collection I got as a kid and I listened to the song over and over again trying to memorize the lyrics which were mostly indecipherable to me at the time.
Posted by Mike Thomas at 1/04/2007 No comments:

It's morning again in America...

Happy days are here again now that Democrats are Back in the Saddle.

Democrats prepared to take control of both houses of Congress on Thursday after spending most of the last dozen years in the minority, with plans to quickly raise the minimum wage and toughen lobbying rules....
Exit polls showed that rising discontent over the war in Iraq and a spate of corruption scandals helped drive voters in November to hand Democrats control of both houses of Congress for the first time since 1994.
And a national poll released this week showed Democrats have strong support for nearly all the measures they want to pass in their first days in charge.

The Democrats’ six-pronged 100-hour agenda (which will actually be more like 30-plus days) includes:

* Hiking the minimum wage;
* Repeal Bush's ban on federal funding for embryonic stem-cell research;
* Roll back tax breaks for the oil industry and redirect the revenue to alternative energy research;
* Implement the homeland security recommendations of the 9/11 commission;
* Cut interest rates for student loans;
* Allow administrators of the Medicare prescription drug program to negotiate with pharmaceutical companies for discount prices.

To get those through in the allotted time, Democrats will have to use some of the same strong-arm tactics perfected by their Republican predecessors, but after that they have promised to return a level of bipartisanship and civility to the Congress that has not been seen in the past dozen years.
Posted by Mike Thomas at 1/04/2007 No comments:

Once again there is a glimmer of hope that the residents of the District of Columbia may finally get real representation in Congress.
I wrote about this in May 2005 when it last seemed possible that compromise legislation pairing a new seat in D.C. with a seat in Utah might be approved. Of course, I should not have expected the incompetent, do-nothing Repubican Congress to achieve this milestone. But now the issue is back with the full support of the majority party and a good number of newly minted minority Republicans as well.
My opinion hasn’t changed since 2005. Statehood isn’t going to happen anytime soon and this is as good a compromise as D.C. is going to get so they should take hold of it.
As for Senate representation, which they still will not have, maybe they can make a deal to have the district attached to Virginia for purposes of electing senators in the future. It would be better than nothing.
Posted by Mike Thomas at 1/03/2007 No comments:

2006 ended with a lot of newsy events including the deaths of three prominent people: The Godfather of Soul James Brown, former President Gerald Ford and toppled Iraqi dictator Saddam Hussein.
Brown and Ford deserve all the adulation they are recieving. Ford was probably the best Republican president since Dwight Eisenhower. But Hussein’s departure came at the end of a noose and is now the subject of much consternation in Iraq over the way the Iraqi government carried out the execution. I have no desire to seek out the videos of the execution which are no doubt circulating on the Web, but from what I’ve read the hurried midnight execution devolved into a shameful spectacle with hooded executioners dancing around taunting the 69-year-old despot and chanting the name of their new hero - Moqtada! Moqtada! Moqtada!

From the NYTimes:
“...those who conducted it (the execution) had allowed it to deteriorate into a sectarian free-for-all that had the effect, on the video recordings, of making Mr. Hussein, a mass murderer, appear dignified and restrained, and his executioners, representing Shiites who were his principal victims, seem like bullying street thugs.”

The Iraqi government appears to have ignored its own constitution by carrying out the execution on the beginning of a Muslim holiday. That should serve as a warning to all the ardent war supporters and a slap in the face to all those who insist that we are witnessing the birth of democracy in the Middle East. The fact that the current regime in Iraq has such a low opinion of its own constitution is a bad sign for the long-term prospects of democracy in Iraq.
I am opposed to the death penalty on principle and I think a more fitting fate for Saddam would have been to spend the rest of his life being tried and convicted for the thousands of atrocities committed under his rule. But one cannot argue that Saddam did not deserve his fate. He clearly deserved that and much worse, but the death penalty is not just about what the convict deserves. The most important thing is what it says about the people currently in power. It speaks to their character and their humanity, and on that scale Saddam’s execution, and especially the way it was carried out, was indeed a sad note. If they wanted to prove that they could be just as cruel and vindictive as Saddam was, then Mission Accomplished. However, if they wanted to draw a distinction between the old regime and the new one, this was not the way to go about it.
Posted by Mike Thomas at 1/02/2007 No comments: