The guns on campus bill in the Texas Lege was declared dead a while back when it failed to meet a key House deadline. And yet, it may have been brought back from the dead like Frankenstein’s monster thanks to a vote in the Senate. It is disheartening to think that 20 state senators kowtowed to the gun nut lobby and supported this monstrosity, but that just shows you the power that the extreme right-wing NRA has over the GOP today.
The bills seeming resurrection has local GOP blogger Andres excited and he is trying to drum up support for its passage. But House sponsor Joe Driver is quoted today saying the bill is on “life support.”
There was a good Letter to the Editor in the Express-News today that said it well:

Putting an unknown number of guns on Texas campuses defies common sense, yet (Sen. Jeff) Wentworth said: “I don’t want Texas college students picked off like sitting ducks by some deranged madman who comes on campus with a weapon.”
Here’s some news for Wentworth: Many Texans believe, as I do, that a person in the 21st century who thinks it is necessary to carry a loaded concealed weapon everywhere he goes is himself pretty “deranged.”
Bottom line: Go to college to teach and learn. Leave your guns at home.

It is inexcusable that lawmakers would allow private schools to opt out of this rule but not give public university officials the same option. I can tell you right now that I won’t be sending my kids to any school that allows non-law enforcement and security people to walk around with loaded guns.

In other news, the Lege will soon take up the reappointment of rightwing lunatic Don McLeroy to chair the State Board of Education. Hopefully, the Democrats in the Senate will stand up for public school children and face down the rightwing ayatollahs who want to turn our public schools into their version of the Taliban.

And speaking of the Religious Right, I just saw this interesting bit of news.
Imagine if a “liberal” university had decided to ban a student Republican organization. Imagine the hue and cry that would result. Will we hear any protests over this move?
Probably not. The “so-called Liberal Media” is too busy covering speeches by Dick Cheney; interviewing Newt Gingrich and following Sarah Palin’s every move to notice.
Posted by Mike Thomas at 5/22/2009 No comments:

Good news from my conservative blogging buddy Nick Marinelli. He is on the mend and could be up and walking again soon after losing part of his left leg. Nick has had some serious health problems recently stemming from kidney disease and diabetes.
Nick also has a good review of the new Star Trek movie.
Posted by Mike Thomas at 5/22/2009 No comments: 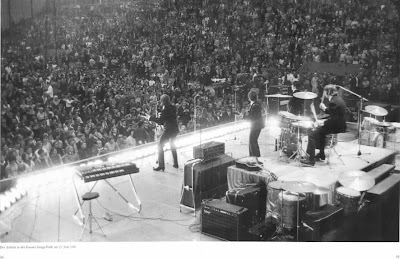 I’m back on a Beatles kick again. For about a year, I had almost no Beatles tunes on my iPod, having excised them to make room for newer music. I have one of the original iPods with just 4 GB of space. That’s room enough for about 1,000 songs, which is plenty, but when I fill it up with every Beatles song, every Bing Crosby song and all my jazz stuff it leaves little room for everything else.
So this week I redid my song list and put most of my Beatles music back on the iPod. I have what I consider to be most of the essential Beatles recordings on cd - Abbey Road, Sgt. Peppers, White Album, Revolver, Rubber Soul, Help!, Hard Day’s Night, Let It Be, Yellow Submarine, Magical Mystery Tour - and in addition I have all three volumes of the Beatles Anthology series and the two-disc Beatles Live at the BBC collection. But that still leaves out a lot of their early music including some of my favorite songs on the Rock & Roll Music compilation that got me hooked on the Beatles in the first place.
This is the track listing for Rock and Roll Music:

I have mentioned my facination with the Beatles before and particularly my introduction to the band through the Rock and Roll Music compilation. The songs are all fast-paced and upbeat and full of energy. Some of the best rock vocal performances of all time are here in my opinion - John Lennon on Twist and Shout and Slow Down - Paul McCartney on Long Tall Sally and I’m Down. And even the tunes sung by George and Ringo simply give John and Paul ample opportunity for excited screaming and background harmonies.
I wore that album out a long time ago and have been trying to replicate it ever since. Of course, being a cheapskate I didn’t want to spend $20 a pop buying the albums I would need to get all of those songs, so I have scoured the used cd bins at Half Price Books and searched online. Alas, Beatles recordings rarely show up in the used record shops and the songs are conspicuously unavailable on iTunes. Although many of the songs I needed are on the Anthology collection or the BBC Live series, they are alternate recordings and not the ones I remembered listening to over and over and over again.
So I finally decided to break it all down and see what I would need to buy to get the songs I wanted. As it turned out, I really only needed to to get two more albums - Please Please Me, the Beatles first album which has Twist and Shout and I Saw Her Standing There; and Past Masters Vol. 1 which collects all the songs that were issued as singles or EPs and never appeared on any of the Beatles’ albums. Using some Barnes and Nobles gift cards I got for Christmas, I was able to finally get the cds I needed. There are still a handful of songs I don’t have, but the alternate versions on the Anthology or BBC recordings are satisfactory for right now.
Posted by Mike Thomas at 5/21/2009 No comments:

Why I’m not bothered by Obama’s recent “flip-flops”

President Obama has done a number of things recently that have alarmed and troubled many of his supporters on the left. He has opposed efforts to establish a “truth commission” that would delve into Bush administration abuses and alleged crimes surrounding the torture and detention of prisoners in our custody; he has changed his mind about releasing graphic photos of the mistreatment of prisoners under U.S. control; he has decided to restart the military tribunals at Guantanamo that he had earlier condemned under Bush/Cheney (albeit with better protections for the accused) and he has continued to prosecute the war in Afghanistan in an aggressive manner, even calling back a general to take charge who still has a cloud hanging over him from the scandal over the above-mentioned abuses.
I’m not going to defend all these decisions or say that they are the correct moves. They could very well prove to be mistakes on his part. I don’t know.
But what I find refreshing and reassuring about these moves is that it demonstrates that, unlike Bush, Obama is NOT an ideologue following an agenda chiseled in stone. What it shows me is that Obama is not so filled with self-assurance as Bush was that he cannot be persuaded to change his mind when presented with compelling evidence. I may not like all the decisions on their face, but I have to accept that he has a lot more information than I do.
Bush, as you may recall, never seemed to change his mind about anything. Commentators frequently acted like this was a good thing, but it clearly was not. Bush was a die-hard ideologue and a true believer in his own righteousness who lived inside a bubble of like-minded people providing continuous positive support and feedback. Bush never changed his mind because he rarely, if ever, was exposed to contrary or competing information and even if he was tended to disregard it as false or heretical.
Obama, on the other hand, is not afraid to engage people with differeing views and constantly strives to find common ground. I like the fact that his views are not set in stone and that he will make the best decision at the time based on the best possible information. I did not vote for Obama because I agreed with him on every single position and I do not expect that he will always do everything just the way I think he should. I voted for Obama because I respect his intellect and his judgement and I want him to use it while he is in office. If he makes some bad decisions and some mistakes, that is to be expected. He can also correct those mistakes more quickly if he is not locked into a misguided ideology.
People who supported Bush, however, did not want him making his own decisions. They wanted him to go strictly by the book - that being the wingnut playbook which has failed miserably everytime it has been enacted. And Bush did just what they wanted in spades. He followed their playbook to a T. Unfortunately for Bush, and all the rest of us as well, the playbook led us into our current economic disaster as well as our foreign policy quagmire. And even more unfortunately for Bush, he has now been abandoned by all the true believers who refuse to accept that their ideas don’t work and now claim that Bush was not a “true” conservative and did not follow their playbook faithfully enough.
I would much rather have a president who is willing to “flip-flop” on occasion rather than staying the course even when it means driving us over a cliff.
Posted by Mike Thomas at 5/18/2009 No comments: