Obama is a Liberal!! Eeeeek!

Did you hear that Barack Obama is the most liberal member of the U.S. Senate? At least according to the National Journal, a wonkish political magazine that circulates mostly around Washington, D.C.

While I don’t have a problem with people being “liberal” per se, I am highly suspicious of this latest designation by the magazine which seems to always determine that whoever is the Democratic Party nominee for president is also “the most liberal”. In 2004, the magazine determined that John Kerry was the “most liberal” member of the Senate.
Steve Benen at The Washington Monthly explains the flaws in the National Journal’s methodology.

Sure, Obama is liberal. I think that is fine. But you can’t tell me he is the most liberal in a Senate that includes Bernie Sanders, the avowed Socialist from Vermont. Plus, there are a number of other Senators who are known to be more highly partisan and ideological than Mr. Obama. So how did he get tagged as the most liberal?
Simple, he spent a lot of time last year campaigning for president and missed a lot of votes. And because the National Journal’s methodology is screwed up and doesn’t account for missed votes, he came out on top. The same exact thing happened four years ago with John Kerry.

But don’t expect to hear that explanation attached to all the media reports about this. And, of course, it will become the standard line in every Repubican stump speech and political ad from here on out.
Posted by Mike Thomas at 2/01/2008 No comments:

The total number of Republicans leaving the U.S. House is up to a record 28 so far. That compares to just five House Democrats who are vacating their seats. In the Senate, there are six Republicans stepping down and no Democrats so far.
Combine that with the fact that the Democratic Congressional Campaign Committee has seven times as much money in the bank as its Republican counterpart (there is most likely a similar disparity on the Senate side, but the Republican Senatorial Campaign Committee refused to make its fund-raising figures available) and the stage is set for a very good election season for Democrats.
Posted by Mike Thomas at 1/31/2008 No comments:

This rightwing rejection of McCain, while real to a lot of the movements devout followers, is part of a larger practice by the movement’s leaders of always ducking responsibility and avoiding blame.
If McCain had a prayer of a chance of winning the next election, I don’t think we would see this intense of a negative reaction to him from the rightwing base. But because it’s nearly a foregone conclusion that Repubilcans are going to get their asses kicked in November, it is imperative for the conservative movement’s leaders to make sure that it does not appear that the country is rejecting their candidate or their ideas. Thus, this rejection of McCain for being “too liberal” is an effort to insulate themselves from the electoral drubbing that will undoubtedly take place as a consequence of Bush’s absymal failure these past seven years.

Likewise, the movement’s leaders are hard at work trying to extract themselves from the disaster of the Bush years by claiming in retrospect that Bush was not a “true conservative” and putting the blame for everything on his supposed liberal tendencies and, of course, the Democratic Congress which has had only tenuous control of the legislative branch for the past year in the face of veto threats and Republican filibusters.
They have to do this to maintain the myth of superiority and invulnerability that props up their base of supporters. They cannot admit or acknowledge that their ideas have been tried repeatedly during the past several decades and have failed miserably each and every time. So the charade continues....
Posted by Mike Thomas at 1/31/2008 No comments:

John McCain is going to win the Republican nomination for president and the rightwingers are NOT happy about it.
My friend Nick at Conservative Dialysis had denounced McCain as a RINO (Republican In Name Only).

Texas Fred says “Conservatives have some work to do now, and that work is the job of keeping McCain OUT of the White House.”

Jimmyk is distraught because he believes “John McCain is for amnesty.”

And Owen at Boots and Sabers is prepared to sit out the next election in protest if McCain is the Republican nominee.

I’m jaded.  The McCain surge has me completely disillusioned about national politics.  I can’t vote for McCain.  I won’t.

Before going poof and disappearing into the blogospheric ether, my old friend Bill Crawford had written off McCain and even when he was starting his comeback, was still convinced he could not win the nomination.

And rightwing radio yakker Mark Levin spells out some of the reasons for the conservative revulsion to McCain.

Texas Fred is now making it clear that he will NOT vote for McCain regardless of what happens:

I will officially go on record, here and now, and I make this a public disclosure to any and all that have doubts as to where I stand, IF John McCain is the candidate chosen by the RNC to run for the White House, I will NOT support the Republican choice, I won’t vote Dem, that’s not even an option, but I may very well be writing in a candidate for POTUS…

And most of his readers seem to agree. I certainly hope that he sticks with his convictions.

Meanwhile, comedian Rush Limbaugh is throwing down the gauntlet claiming that the nomination of McCain will fracture the GOP’s conservative base.

John Edwards decision to quit the presidential race is really only surprising in its timing. I had expected that he would stay in at least through Super Tuesday to collect as many delegates as he could to use as leverage later on assuming that the Hillary-Obama race goes down to the wire. But instead he has bowed out now clearing the way for a two-person race in the Democratic primary. I’m sure there will be speculation that he may have cut a deal with Obama for a possible VP slot on the ticket. Wil Democrats go with the same VP candidate two elections in a row? I’m quite sure that it will have to go to a white male candidate for “balance” regardless of whether Hillary or Obama wins the race. But if not Edwards, then who?

Meanwhile, Rudy Giuliani’s collapse is finally complete with his weak third-place showing in Florida. Rudy had been a walking corpse for some time now, so his departure was pretty much a given. Hit the road, Rudy! And don’t come back no more.
Huckabee is washed up too, but isn’t ready to admit it yet. I’m sure the party is encouraging him to stay in the race for now to keep the religious wingnut faction from totally freaking out.
McCain is now the clear frontrunner on the GOP side and could swamp the struggling Romney campaign on Super Tuesday.
Florida was a tough loss for Romney, who finished a close second but walks away with nothing because of the state’s winner-take-all delegate distribution policy. Until now, McCain was lagging behind Romney in the delegate count, but now he is caught up and then some.
McCain’s political resurrection which I predicted back in early December is the most interesting thing on the Republican side right now. But it also sets the stage for a replay of the 1996 election with McCain playing the role of Bob Dole, the war hero and GOP stalwart.
Posted by Mike Thomas at 1/30/2008 No comments:

No subpoena for Knoblauch

Chuck Knoblauch has agreed to meet with the House Committee investigating steroid use in baseball and the reported subpoena was never issued.
It now seems as if the whole big fuss made over his initial failure to respond to the committee’s request was much ado about nothing. Maybe he was on a cruise or something when the notice came. Who knows? The point is that all the abuse he recieved - including being listed as one of the “Worst Persons in the World” on Keith Olbermann’s “Countdown” show on MSNBC - was overblown and unwarranted.
Posted by Mike Thomas at 1/29/2008 No comments: 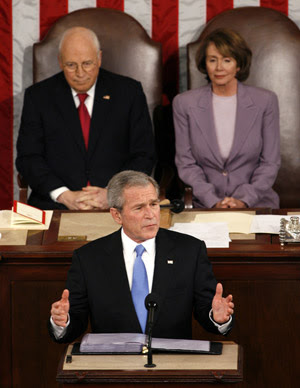 I did not watch President Bush’s State of the Union speech last night. I usually don’t have time to sit down and watch the TV during primetime anyway since that is when we are in the midst of herding our children up the stairs, bathing them and reading books to them before putting them to bed - a process that generally starts around 7:30 and ends around 8:30 p.m. if we are lucky.
But I didn’t bother to record the speech either, which is unusual. I’m so thoroughly disgusted with and disappointed in this president that I don’t think I could have stomached his final, pointless SOTU address.
About the only thing I was curious about was whether or not Bush could keep a straight face when saying “The state of our union is strong”, which I think is required by law for every president to say at some point in the speech. Did anyone in the audience snicker at that moment?
But now I see today that Bush did not speak those words at the beginning of the address as is tradtionally done. Instead, he saved them for the very end and added a rhetorical twist like this:

"So long as we continue to trust the people, our nation will prosper, our liberty will be secure and the state of our union will remain strong."

And there in a nutshell is the entire problem with the past seven years which have been nothing short of disasterous for our nation. Back in 2000, we did not “trust the people.” For if we had, Al Gore, the winner of the popular vote, would have been named president. Instead, we trusted a screwed up electoral college system that should have been junked long ago, and a sharply divided, partisan Supreme Court which foistered the popular vote loser down our throats.
And so, for the past seven years we have had the Worst President Ever, who, in league with one of the Worst Congresses Ever, has managed to shrink our nation’s superpower status by leading us into a quagmire in the Middle East that has weakened our military infrastructure and reduced our standing in the world, while at the same time pursuing a fiscally irresponsible domestic agenda at home that has left us with record deficits and an economy on the brink of recession.
Hopefully, by this time next year, assuming that we “trust the people,” the person giving the next SOTU address will either be Hillary Clinton or Barak Obama, and the person sitting behind the president next to Nancy Pelosi WILL NOT be Dick Cheney.
That, by itself, is something to look forward to.
Posted by Mike Thomas at 1/29/2008 No comments: