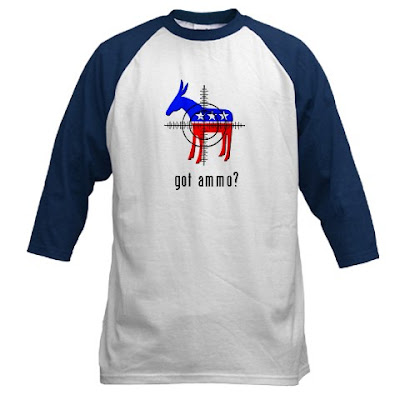 That’s the message we are getting today from leaders of the Tea Party movement in the wake of the mass shooting in Arizona over the weekend that killed six people and critically injured a Democratic Congresswoman.
After a particularly vicious and nasty (and largely successful) campaign to defeat Democratic lawmakers across the country in which violent imagery and slogans were constantly referenced, should we be surprised that a deranged individual decided to take matters into his own hands and carry out a “Second Amendment remedy” against one of the Tea Party’s top targets who barely managed to hang onto her seat?
Certainly it is unfair to spread blame to everyone involved with or connected to the Tea Party movement. Most, I’m sure, are gentle, peace-loving folks who wouldn’t harm a fly, much less shoot a moose. And only a handful would be radical enough to purchase and wear a provocative t-shirt like the one shown above.
But is it too much to ask that this tragedy at least serve as a wake up call to those out there who have been far too willing to tolerate hateful, violent, anti-government rhetoric in order to advance their political causes? Can we quit referring to the federal government as “the enemy”? Can we quit with the paranoid, alarmist crys that THEY are “out to take your guns”? Can we quit scaring people with hyped-up fantasies about “death panels” and “terror babies”?
Sadly, I am afraid that it IS too much to ask. The initial response from folks on the right has been angry denunciations of those on the left for having even dared suggest such a thing. Their immediate response was to deny any connection whatsoever with the deranged shooter and claim he is some kind of left-wing anarchist who was never influenced by their campaign against the congresswoman.
And, I am afraid, that there will be continued resistance to restoring common sense gun laws such as the Clinton-era Assault Weapons Ban that Republicans allowed to lapse in 2004. If that law had been in place, the deranged gunman would not have been able to buy a brand new extended clip with 30-rounds for his Glock 19 which he purchased without any need for a license or a waiting period or a background check.
What exactly does anyone outside of the military or law enforcement need with an extended clip for a Glock 19 other than to make it easier to commit mass murder?
But getting common sense gun laws through this current Congress is now likely impossible since voters, in their inestimable wisdom, decided to reward the Tea Partiers big victories in the last election and hand control of the House back to the Republicans again.
Posted by Mike Thomas at 1/10/2011 No comments: