The Party of Family Values

It looks like the Republican/Evangelicals have another Jimmy Swaggart/Jim Baker scandal on their hands.

The president of the National Association of Evangelicals resigned Thursday after denying an accusation by a male prostitute that the pastor paid him for sex over three years.
The Rev. Ted Haggard said he is also temporarily stepping aside from the pulpit of his church in Colorado Springs, Colorado, pending an internal investigation by the church.
The National Association of Evangelicals is an umbrella group for more than 45,000 churches and some 30 million members across the country.

The word is that Haggard has confessed to elders in his congregation that at least part of the allegations are true. The confession came after a long-night of waterboarding overseen by Vice President Dick Cheney.

Seriously, though, this is a huge deal just days before the midterm elections. Joshua Micah Marshall calls it “the conservative equivalent of Jesse Jackson getting caught wearing a hood at a Klan cross burning.”

And here’s some more breaking news from the party of family values:

ALLENTOWN, Pennsylvania (AP) -- A Republican congressman accused of abusing his ex-mistress agreed to pay her about $500,000 in a settlement last year that contained a powerful incentive for her to keep quiet until after Election Day, a person familiar with the terms of the deal told The Associated Press.
Posted by Mike Thomas at 11/03/2006 No comments: 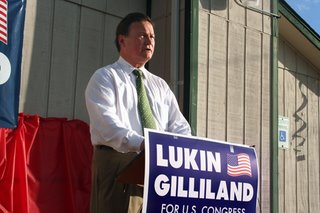 There has been no polling done in the 23rd Congressional District and I find that rather odd. Nationally the race has been written off as a Leans Republicans seat and it could very well turnout that Republican Henry Bonilla waltzes to an easy re-election.
But this is the district that was most effected by the Supreme Court ruling on redistricting. Several heavily Republican precincts were taken away and several heavily Democratic ones were added. And there are at least three highly credible Democratic candidates making a concerted effort in the free-for-all open election that has resulted. Former Congressman Ciro Rodriguez has good name recognition. Wealthy rancher Lukin Gilliland has spent the most money and run the most aggressive race so far. And Albert Uresti has the benefit of being on the same ballot as his brother Carlos Uresti who is running for the State Senate.
Combine this with the fact that this is shaping up to be a very good year for Democrats nationally and you have to ask whether they will be able to hold Bonilla below 50 percent and force a run-off election? I really don’t know. I hope they do but nobody is talking about it much and I’m not sure what chance there is of that happening at this point. Bonilla, of course, has tons of cash and has been running lots of TV ads. He also picked up a rather lame and lukewarm endorsement from the incumbent/Republican-loving Express-News. But Gilliland has been out there too and I’m keeping my fingers crossed. Gilliland has my vote, but I would not hesitate to throw my support to Rodriguez or Uresti if they make it into a run-off.
One of the local TV news stations the other day covered a campaign event where Democratic gubernatorial candidate Chris Bell was making an appearance and they got an on-camera interview with Carlos Uresti, who defeated Frank Madla in the primaries for the state Senate race. But they were so clueless that they thought they were talking to Albert Uresti and identified him as such when they ran the interview during a segment on the District 23 race. The clip they aired even has Carlos talking about his state Senate race and it still wasn’t enough to tip them off about their mistake. But then TV newscasters aren’t the brightest bulbs out there as former TV newscaster Henry Bonilla demonstrates.
Posted by Mike Thomas at 11/02/2006 No comments:

House Republican Majority Leader John Boehner wants to blame the troops for the problems we are having in Iraq.

"Let's not blame what's happening in Iraq on Rumsfeld," Boehner said yesterday on CNN. "The fact is, the generals on the ground are in charge, and he works closely with them and the president."

After the flap about John Kerry supposedly demeaning our troops with his flubbed joke at a campaign rally, I find it incredible that Boehner would turn around the next day and point an accusing finger at the troops on the ground and say that it’s all their fault and not the fault of the Republican leadership back in Washington. How incredibly despicable. Boehner, of course, is another one of the many Republican chickenhawks - graduated high school in 1968 in the midst of the Vietnam conflict and yet somehow managed to avoid serving a day in the military. Now he is defending his fellow chickenhawks in the Bush administration by blaming all their failings during the Iraq war on the troops and their military leaders.

Kerry's gaffe about education aside, he did say one thing that is quite certain. We are definitely "stuck in Iraq" with no hope of getting out anytime soon. Americans's support for Bush's handling of the war is now at 29 percent, so his assurances that we will "stay the course" and his promise to keep his crack Iraq team of Rumsfeld and Cheney in place for the next two years means the only way people can hope to change things is to vote Democratic in the mid-term elections.
Posted by Mike Thomas at 11/02/2006 No comments: