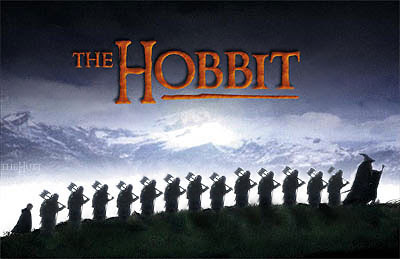 Great news about a new JRR Tolkien movie with Peter Jackson at the helm.
Apparently, New Line Cinemas and Peter Jackson have decided to kiss and make up. I don’t think there was ever any question that this would happen because it would have been terribly stupid on New Line’s part to do anything else.
Now it looks as if Jackson will executive produce, but not direct, the next two, yes two, Tolkien films. The first will be based on The Hobbit, the precursor to Lord of the Rings, and the second will deal with the 60 year period between the time when the Hobbit story ends and the Lord of the Rings story begins.

The Express-News had a story the other day about a committee on accreditation at the Texas Higher Education Coordinating Board giving the "green light" for the Institute for Creation Science to get state certification for an online master's degree program in science education.
That means these nut jobs who believe the world was created in seven days just 5,000 years ago will be able to teach science classes in our public schools.

When I saw this my first though was "How the hell did this happen?"
It seems I wasn't alone.
What happened is that a delegation of so-called experts made a formal site visit to the ICS in Dallas and gave them a glowing report which led to a unanimous vote of affermation from the accreditation committee. Now the issue will go to the full committee in January.
But who were these "experts" that evaluated the ICS? The E-N reports thusly:

The trio consisted of two scholars at Texas A&M University-Commerce, reference librarian David Rankin and educational leadership professor Lee "Rusty" Waller, and Gloria White, managing director of the Dana Research Center for Mathematics and Science Education at the University of Texas at Austin.

A reference librarian and an education leadership professor? Where are the scientists?? Oh, and here is the kicker. The educational leadership prof is also a Baptist minister.
And the third person, Gloria White, is a graduate of Abilene Christian University, a private religious school in West Texas.
It certainly sounds like the deck was stacked in favor of the fundamentalist crowd.

So now what? If they actually allow this group to get accredited here it will make Texas a laughing stock and the accreditations for all the legitimate schools won't be worth crap anymore. It is high time that some heads started to roll up in Austin.
Posted by Mike Thomas at 12/19/2007 No comments:

It seems that my old friend Bill decided to respond to my previous post on this subject.

I take this as a positive sign. At first, Bill had indicated to jimmyk that he would not respond at all. But it seems like he just could not resist. I think this might be the first time Bill has given me a link on his site since the little blow-up a while back when he began deleting all of my comments (and Ann’s) and stopped responding to my e-mail.

He is continuing to tout the one CIA officer’s claims as rock solid proof that torture works and ignores the contrary claims and the fact that the CIA officer can’t backup what he says with any specific examples.
Instead, he demands that Democrats “defend their policy of outlawing an interrogation technique that is: 1) reserved for the worst of the worst, and 2) saves lives...”

First off, when we take a “suspect” into captivity, we generally don’t even know for sure that they are guilty of anything, much less that they are the “worst of the worst.”
Secondly, the link that Bill provides for his next assertion that torture saves lives is little more than a rightwing blogger’s rant claiming that Khalid Sheik Muhammed deserved to be waterboarded because he was such a bad guy.

The man earned his waterboarding. He masterminded 9/11 on behalf of Osama bin Laden. He admits he beheaded Daniel Pearl.

As to that confession about Pearl, it came as welcome news to Ahmed Omar Saeed Sheikh who had already been arrested by Pakistani authorties and charged with Pearl’s murder. Now he is planning to use the Khalid confession in his appeal.

But Bill seems genuinely confused when he also reposts this bit:

ABC News reported: “A senior CIA official said KSM later admitted it was only because of the waterboarding that he talked.”

Bill seems to think this means that Khalid is crediting waterboarding with getting him to confess to a murder he actually did commit.
What that bit is really saying, however, is that Khalid now denies killing Pearl and says he only confessed to it because they were torturing him and he told them what they wanted to hear.

The fact that Bill can’t seem to make this distinction might explain his inability to understand why “liberals oppose waterboarding” (along with most every other decent American liberal or otherwise). He goes on to speculate that “even a liberal” would approve of waterboarding if there was a chance that it would save their family’s lives. But this is a ridiculous fantasy unlikely to ever occur outside a script for an episode of Fox’s “24.” And if we are suddenly going to say waterboarding is OK in that instance, is there ever a point where we would draw the line? Would you approve torturing the suspect’s wife and children if you thought it could “save the lives of your family”? What if someone held a gun to your family and threatened to kill them if you did not go out in the street and kill some random innocent person. Would you do it?
We cannot set policy based on such ridiculous and outrageous rightwing fantasy scenarios.

Bill then goes on to claim that I would be in favor of torturing people if a Democratic president were doing it and the only reason I’m not for it now is because it’s being done by Republicans.

...the real reason the Left opposes waterboarding is because the president is a Republican.  They'll pipe down if a Democrat wins the White House.

You mean like the far right piped down about immigration when a pro-immigration Republican president (Bush) was elected? Nonsense!
And no, it doesn’t change anything whether or not Nancy Pelosi failed to protest about waterboarding prior to 9/11. If the allegation is true, then I am disappointed in her. But regardless, at least she is on the right side now, which is more than can be said about most Republicans.
Posted by Mike Thomas at 12/18/2007 No comments:

The FBI is calling “bullshit” to the CIA’s claims that torture works.

Al-Qaeda captive Abu Zubaida, whose interrogation videotapes were destroyed by the CIA, remains the subject of a dispute between FBI and CIA officials over his significance as a terrorism suspect and whether his most important revelations came from traditional interrogations or from torture.

While CIA officials have described him as an important insider whose disclosures under intense pressure saved lives, some FBI agents and analysts say he is largely a loudmouthed and mentally troubled hotelier whose credibility dropped as the CIA subjected him to a simulated drowning technique known as waterboarding and to other "enhanced interrogation" measures.

There is little dispute, according to officials from both agencies, that Abu Zubaida provided some valuable intelligence before CIA interrogators began to rough him up, including information that helped identify Khalid Sheik Mohammed, the alleged mastermind of the Sept. 11 attacks, and al-Qaeda operative Jose Padilla. Footnotes in the 9/11 Commission report attribute information about a variety of al-Qaeda personnel and activities to interrogations of Abu Zubaida beginning in April 2002 and lasting through February 2004.

Former CIA officer John Kiriakou -- who participated in Abu Zubaida's capture, was present for the next three days and later saw classified reports of the agency's harsh interrogations -- attracted attention last week when he said that information obtained from Abu Zubaida under measures that Kiriakou now regards as torture "probably saved lives."

Former CIA director George J. Tenet, in his book recounting his tenure at the agency, also said claims that Abu Zubaida's importance was overstated were "baloney." Tenet wrote: "Abu Zubaydah had been at the crossroads of many al-Qaida operations and was in position to -- and did -- share critical information with his interrogators."

But FBI officials, including agents who questioned him after his capture or reviewed documents seized from his home, have concluded that even though he knew some al-Qaeda players, he provided interrogators with increasingly dubious information as the CIA's harsh treatment intensified in late 2002.

In legal papers prepared for a military hearing, Abu Zubaida himself has asserted that he told his interrogators whatever they wanted to hear to make the treatment stop.

So they got all the good information out of him by using legitimate interrogation techniques. But once they started the torture sessions, all they got was whatever he thought they wanted to hear just to make them stop. In other words, crap.
Posted by Mike Thomas at 12/18/2007 No comments:

How is it that the only professional athletes who have apparently dabbled in steroids or growth hormones over the years are either baseball players or Olympic athletes?
Did the steroid era totally miss all the other sports? No football players or basketball players ever got “juiced”?
Does anyone else find that hard to believe?
And yet, here we are singling out baseball for condemnation and turning a blind eye to every other professional sport.
OK, enough of that whining.
I have a mixed reaction to the Mitchell Report that came out last week. First, I think it was unfair to throw all those names out there when many of them are based on second-hand, hearsay evidence that would never hold up in court. Also, players who were using a controlled substance before it was formally banned by baseball should not have be penalized. That would include players like Andy Pettitte and Chuck Knoblauch who were apparently using a human growth hormone to deal with injuries prior to their being banned by the league.
In Knoblauch’s case, it appears that his use of the hormone was part of a desperate attempt to deal with his throwing problem which brought his career to a premature end. Likewise, Pettitte says he was trying to heal faster from an arm injury when he took the drugs, and not trying to pump up and gain an edge on the field.
But what about the players who clearly were juicing up to get that extra little “edge”? I’m torn. I see how the drug would give them an unfair advantage, not just against contemporary players not on the juice, but also compared to stars of the past whose baseball records were broken during that period.
But at the same time, the fact that so many people were apparently juiced also makes players like Barry Bonds and Mark McGwire seem better in retrospect. That’s because it shows that simply taking steroids isn’t enough to turn anyone into a homerun champ. You still have to have the talent.
And finally, this whole steroid mess should make Pete Rose come out smelling like a, well, a rose. After all, no one can claim that his all-time record for most hits was due to anything other than his own natural efforts. Even his gambling addiction which got him banned after he was no longer an active player had any impact on his record.
Clearly if any of these steroid-era ballplayers make it into the Hall of Fame, then Pete Rose should be allowed in too.
Posted by Mike Thomas at 12/17/2007 No comments: