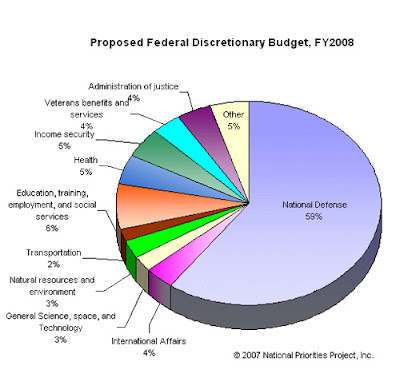 There is a cute video up at the Cato Institute purporting to show how simple it would be to balance the federal budget without any tax increases and without allowing any of Bush’s tax cuts for the rich to expire next year.
Daniel Mitchell, the president of Cato, starts out in a folksy manner explaining that all we need to do is “go back” to the Constitution and only fund those federal programs specifically authorized in Aticle 1 Section 8 of our founding document.
And then “Voila!” No more budget deficit. Because what that would mean is that we would eliminate a huge swath of government departments and programs that were unknown or not deemed necessary 250 years ago. Mitchell rattles off the following departments that would be wiped out under this scenario:

The very fact that Mitchell is proposing such a course of action with a straight face and expecting people to take it seriously is very disturbing. That is because it takes a high level of willful ignorance to buy into that nonsense.
Turn back the clock to the horse-and-buggy era and all our problems would be solved, Mitchell is saying. Seriously.
Let’s just take Transportation as an example. What does he expect would happen? Do we shut down all the airports when we disband the FAA and fire all the air traffic controllers? What happens to the U.S. Highway System? Will each state set up tolls for non-state residents to drive on their roads? If coastal states have to pay for the upkeep and maintenance of sea ports will they then charge tariffs to inland states before goods and services are delivered? How long before our entire economy collapses in a jumble of feuding municipalities?
Or how about the Agriculture Department? No more ag subsidies? Sounds great, unless you live in a farm-belt state that relies heavily on these subsidies to get by, especially when the weather is uncooperative. And if the Ag Department is gone, what happens to the School Lunch Program which is financed by USDA? Tough luck kids, you go hungry now?
What about the research that USDA does on farm and livestock pests? How expensive will our grocery bills get once all this federal coordination goes away? Do you think the invisible hand of the market will step in and make everyone right?
This is crazy stuff that is not even worth anyone’s time to refute. If you think we can just wipe out all these federal programs, get a big fat tax cut in the mail, and then go on with our lives like nothing happened, they you clearly don’t understand what is at stake here.
We live in a very complex, highly evolved society that has gone through multiple decades of trial and error getting to where we are today. There is always room for budget cuts and operational efficiences that can eliminate waste and save money. But a radical overhaul of our system of government as the Cato wingnuts are advocating would shred our society and result in chaos and disaster.
There is no question that we have a big government that spends lots of money. We have a large welfare state and have had one for decades. But name a single country that doesn’t have a large welfare state where you would be willing to live today and raise a family. There are none that I know of and tiny little desert islands don’t count.
Posted by Mike Thomas at 10/07/2010 No comments: 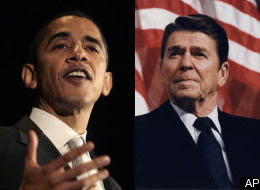 Republicans need to win 39 House seats this fall to take control of the House and a lot of political prognosticators think they can do it.
But even if the Republicans’ wildest dreams come true and they ride a tidal wave of voter resentment back to power in the House, it will ultimately mean very little.
President Obama may seem to be in a precarious position with his low poll numbers and his party possibly slipping into the minority, but he would still be better off than Ronald Reagan was at the same point in his presidency.
During the 1982 midterm elections, two years after Reagan swept to victory over former President Jimmy Carter, his poll numbers were almost identical to what Obama’s are right now. Furthermore, his party lost 27 seats during that election. But the big difference for Reagan, was that his party was already in the minority at that point. They lost 27 seats when they didn’t have that many to begin with. Republicans had 192 seats and fell all the way down to 166. By comparison, Democrats currently have 256 seats and even the most optimistic forecasts for Republican election prospects don’t have them dropping below 200. So, even in a worst case scenario for Obama, he will still have more allies in the House than Reagan did after his mid-term fiasco. And we all know what happened to Reagan two-years after that. He won one of the biggest landslide elections ever over a major Democratic establishment candidate.
Republicans will be lucky if they can even get one of their better candidates through the primary process which is likely to be controlled by the extremist Tea Party faction.
So while things might look bad for Obama in the short-term, his long-term prospects are likely to improve as the economy continues to recover.
Posted by Mike Thomas at 10/06/2010 No comments: