If this is true, Bush deserves to be impeached:

Ex-CIA Official Faults Use of Data on Iraq

The former CIA official who coordinated U.S. intelligence on the Middle East until last year has accused the Bush administration of "cherry-picking" intelligence on Iraq to justify a decision it had already reached to go to war, and of ignoring warnings that the country could easily fall into violence and chaos after an invasion to overthrow Saddam Hussein.

Paul R. Pillar, who was the national intelligence officer for the Near East and South Asia from 2000 to 2005, acknowledges the U.S. intelligence agencies' mistakes in concluding that Hussein's government possessed weapons of mass destruction. But he said those misjudgments did not drive the administration's decision to invade.

"Official intelligence on Iraqi weapons programs was flawed, but even with its flaws, it was not what led to the war," Pillar wrote in the upcoming issue of the journal Foreign Affairs. Instead, he asserted, the administration "went to war without requesting -- and evidently without being influenced by -- any strategic-level intelligence assessments on any aspect of Iraq."

"It has become clear that official intelligence was not relied on in making even the most significant national security decisions, that intelligence was misused publicly to justify decisions already made, that damaging ill will developed between [Bush] policymakers and intelligence officers, and that the intelligence community's own work was politicized," Pillar wrote.

Pillar's critique is one of the most severe indictments of White House actions by a former Bush official since Richard C. Clarke, a former National Security Council staff member, went public with his criticism of the administration's handling of the Sept. 11, 2001, attacks and its failure to deal with the terrorist threat beforehand.

Bush and company will, of course, deny these allegations and the Republican Congress is not about to investigate them, so I doubt anything will come of it. But if you want to know why Democrats are so angry (along with other people who are paying attention) then here it is in a nutshell.
Posted by Mike Thomas at 2/10/2006 No comments: 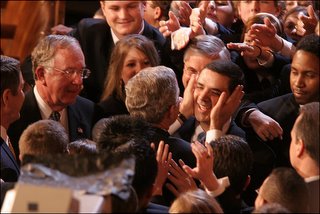 Democrats have a couple of interesting primary races this year, not least of which is the rematch between Former Congressman Ciro Rodriguez and current U.S. Rep. Henry Cuellar.

Cuellar managed to boot Rodriguez out of his seat last time around thanks largely to Republican redistricting that took away familar San Antonio territory in exchange for a big chunk of Laredo. So the Laredo-based Cuellar was able to best the San Antonio-based Rodriguez in a race that came down to geographics. This time the race will be based on ideology and it will be interesting to see how many Laredo Democrats will stick by their man after he has practically shed his Democratic ties and donned a Republican cloak.

Recently, Ciro has become a regular celebrity over at Eschaton ever since President Bush gave Cuellar that curious face massage just before his SOTU speech. It has helped raise Ciro’s profile and contributed significantly to his campaign coffers.
There is good reason why Cuellar is Bush’s favorite “Democrat” as the folks at Burnt Orange Report detail.

Another interesting race here locally is state Sen. Frank Madla’s hotly contested re-election campaign against State Rep. Carlos Uresti. Like Cuellar, Madla is accused of being a DINO (Democrat in name only) who too often casts his lot with the Republicans. He has been especially hit hard on a vote to reduce funding for the Children’s Health Insurance Program or CHIP.

The E-N had a story this morning that is apparently not online in which they note that Ciro is getting a lot of support from trial lawyers while Madla is getting lots of financial support from the traditionally Republican tort-reform groups. As I was driving in to work today I thought it was interesting that I would see clusters of Madla signs grouped together with Cuellar signs. How much you want to bet they are being put out by Republicans?
Posted by Mike Thomas at 2/09/2006 No comments:

Look whose neck is on the budget chopping block again. Big Bird.

Bush wants to slash $150 million from Public Broadcasting, the sharpest cut yet. He just won’t let up on his ideological crusade to crush quality children’s television programming.

In his $2.77 billion budget, Bush asks Congress to sharply cut or eliminate 141 government programs. Almost one-third of the targeted programs are in education, including ones that provide money to support the arts, vocational education, parent resource centers and drug-free schools.

Bush: The Anti-Education president. That will be just part of his legacy, along with the corruption, incompentence and the bloody quagmire in Iraq.

TxBubba of Southpaw notes that while Bush proposes saving $400 million by axing the Corporation for Public Broadcasting, he is advocating that we spend $670 million for the Broadcasting Board of Governors (BBG), the federal agency that supervises all US government non-military propaganda including the Voice of America, Radio Free Europe/Radio Liberty, the Middle East Broadcasting Networks, Radio Free Asia, and the Office of Cuba Broadcasting.
Posted by Mike Thomas at 2/08/2006 No comments: 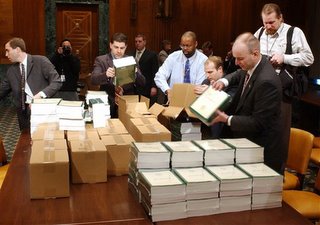 What a pathetic waste of paper this is. There is no chance that Bush’s sorry excuse for a budget will ever see the light of day. Nevertheless, I think it is important that everyone study the proposed budget to see just how screwed up and misguided our president’s policies really are. The Wall Street Journal has excellent coverage of all the atrocities contained within Bush’s recipe for disaster.

Much of the squeezing would be of programs aimed at low-income Americans - and wouldn't save all that much money in the aggregate.

The budget is cowardly in the way it fails to address entitlement spending; frivolous in the way it handles defense spending; and downright cruel in the way it slashes domestic programs for the poor that will result in little to no savings - Especially when you realize he is more than offsetting any of those savings with requests for even more tax cuts for the wealthy.

But as the WSJ points out, this budget will be DOA when it gets to the Congress.
Posted by Mike Thomas at 2/07/2006 No comments:

Bill Crawford of All Things Conservative is back from his extended hiatus.

Also, I was delighted to find out today that two groups have opted to advertize on my humble little site. Wow! I’ll be raking in the big bucks in no time! WooHoo!!
Posted by Mike Thomas at 2/06/2006 No comments: