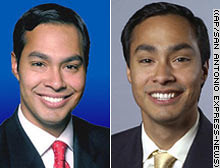 People watching the River Parade on Monday may have thought they were seeing mayoral candidate Julian Castro waving as the San Antonio City Council barge floated down the waterway.
But if they did, they were wrong.
Julian Castro was hosting a neighborhood association meeting that night in District 7, which he still represents. His identical twin brother, Joaquin Castro, was on the boat.

So Joaquin, who happens to be a State Representative, filled in for his brother by riding on the parade float and waving to the crowd. And this is a scandal because...... some people might have thought they were seeing Julian? Yawn. Excuse me while I try to work up some outrage over this.

Cincinnatus, who is backing Judge Phil Hardberger in this race, manages to work up a healthy dose of outrage and calls the whole ordeal "shameful." Meanwhile, P.M. Bryant is more forgiving and accepts the Castro brothers' explanation.

If the other mayoral candidates thought that making a fuss about this would play to their advantage, I'm afraid they were sadly mistaken. It has instead worked to the Castro brothers' advantage by focusing attention on their most distinguishing asset. This is what people expect with twins. They eat this kind of thing up. I'm sure somebody is busy right now writing a movie script about this race that they will be pitching to Walt Disney.

I could be wrong, but the way the national media is playing up the humorous, novelty side of this story is exactly the kind of thing that plays to a politician's favor. And I just heard this morning that the Castro switch was played to great humorous effect on Good Morning America. In addition, there are now rumors that the brothers will be invited onto the David Letterman Show next week as well as countless other news and entertainment programs.

Want to watch your political opponent leave you in the dust? Help to turn them into a national media celebrity a week before the election.
I won't be surprised to see Julian win this race now in a walk.
Posted by Mike Thomas at 4/22/2005 No comments:

I could spit on a stranger

I commented recently on a spate of pie-throwing attacks against conservative commentators in a tongue-in-cheek post.

At the time I was challenged to "show any examples of rightwingers suppressing debate such as this..."

So today in the news we have this example...

KANSAS CITY, Missouri (AP) -- A man spit tobacco juice into the face of Jane Fonda after waiting in line to have her sign her new memoir.

Note: The title of this post comes from one of my favorite songs by Nickel Creek.
Posted by Mike Thomas at 4/21/2005 No comments:

Get ready for Sen. Howard Dean. Yeeeeaaaahhhhhhh!!!
Posted by Mike Thomas at 4/20/2005 No comments:

Tom DeLay is losing it

I guess the pressure is just getting to be too much for him.
The other day in an interview with Fox Radio, the House Majority Leader went off on Supreme Court Justice Anthony Kennedy, a Reagan appointee, attacking him for being an “activist judge” who bases his decisions on international law and not the Constitution. This is a silly argument and one that I have refuted before.

"And not only that, but he said in session that he does his own research on the Internet? That is just incredibly outrageous."

Well, we all know that the Internet is evil since it was created by Al Gore.

Initial thoughts on the new Pope

Ratzinger. Wow. What an awful name. Good thing he will be known as Pope Benedict rather than Pope Ratzinger.
On the other hand, Pope Joseph wouldn’t have been so bad, but I don’t know when the last time a Pope was allowed to keep his own name.
And it’s Pope Benedict XVI. How original. But then what did we expect from someone who is intent on keeping every aspect of church doctrine the same as it has been for hundreds of years? Still, Ratzinger is no more conservative than John Paul II was so everything is still just status quo.
So I am rather indifferent to the whole thing. If it were up to me I would have shaken things up and picked a woman to be the next pope. But of course I’m not Catholic so it doesn’t matter what I think.
Posted by Mike Thomas at 4/20/2005 No comments:

Ten years ago
today I was sitting in the newsroom at the Kerrville Daily Times scanning the AP wire when I saw a news alert come across about a bomb going off at a federal building in Oklahoma City. I told my editor about it and he at first seemed indifferent. The Daily Times was still an afternoon paper at that point and my editor was putting the finishing touches on that day’s front page. He wasn’t in any mood to tear all of his work up and start over at the last minute. But I was insistent as I saw more and more news alerts coming across the wire and he finally conceded that we should probably include something about it on the front page. Before long he was tearing up inside pages as well to make room for pictures and graphics as the realization slowly dawned that this was one of the biggest news stories of the year.

Even in those pre-9/11 days early speculation pointed to foreign terrorists as the culprits - most likely Middle Eastern. But as it turned out it was the work of domestic terrorists which made the tragedy all the more disturbing. This hit home especially hard in Kerrville because there was an active group of militia folks running about town making anti-government noises at that time.
A few days after the bombing we were back in the newsroom when we suddenly heard an explosion go off somewhere in the distance. I remember people literally falling out of their chairs to race for the cars to find out what was going on. Our ever ready photographer Ken Schmidt was out the door in a flash and on the scene in a matter of moments.

Fortunately, there was no damage or injuries from the explosion. The feds had raided one of the local militia groups and confiscated a bunch of bomb-making materials which they took out into a field and blew up. This particular group had produced a video purporting to show people how to make their own homemade bombs and were selling it on the Internet. Quite possibly they were harmless eccentrics like most of the people caught up in the militia movement, but the mood of the country had quickly soured on that sort of thing.
Posted by Mike Thomas at 4/19/2005 No comments:

I thought Fox Trot was particularly hilarious this weekend for anyone who missed it.
Posted by Mike Thomas at 4/18/2005 No comments: 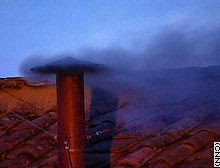 Black smoke
Originally uploaded by mwthomas87.
No pope today.
I'm so glad that CNN has its cameras trained on that smokestack at the Vatican to let me know the instant that the Cardinals have or have not made a decision. It would be a shame to miss that first whiff of smoke as it rises from the chimney.

Seriously, though, I find it curious that the two leading contenders are both 78 years old. Pope John Paul II was a spritely 58 when he was tapped for the job back in 1978, but now they are dismissing the chances of some cardinals who are 60 and 63 because they are supposedly too young.
John Paul II was 84 when he died and the last years of his life were plagued with health woes that made it difficult for him to carry out even the simplest ceremonial tasks. Unless the Vatican wants to go through this process again in just a few years they might want to consider some younger folks.
Posted by Mike Thomas at 4/18/2005 No comments: