Variety, the entertainment trade publication, has come out with their list of the top 100 entertainment icons of the 20th Century.
They ranked the Top 10 as:

I think it is cute putting Mickey Mouse in the list, but I also think it kind of slights Walt Disney who should probably merit inclusion on the list in his own right.

The rest of the 100 in alphabetical order is listed below:

I was upset at first when it looked like Bing Crosby had once again been snubbed until I saw that they had grouped him with Bob Hope. Still, that makes it seem like the only reason he is included is because of the popular Road movies he did with Bob. I would argue that Bing should have made the top 10 based on the fact that he was one of the most popular entertainers of the 1930s and ‘40s. But I’m still happy that he at least made the list.

One big omission in my opinion is Bruce Springsteen. How many others are there?
Posted by Mike Thomas at 10/21/2005 No comments: 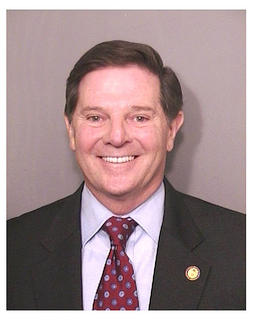 I have to hand it to Tom DeLay. That was smart to make sure his mugshot looks like any other photo of himself that his PR people would be handing out.
When most people think of a mugshot they envision some guy who was just dragged out of bed, unshaved with his hair disheveled and a half-crazed look in his eye. But here we have a smiling Tom DeLay with his hair slicked back and dressed in his best suit and tie looking like he’s ready to shake your hand and kiss your baby.
Posted by Mike Thomas at 10/20/2005 No comments: 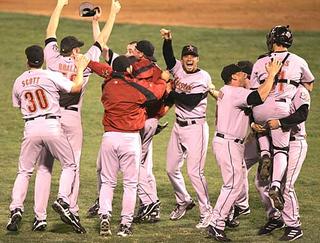 Better a day late than never. The Astros have played much better this year than I had hoped. Last night’s 5-1 victory was a satisfying display of quality hit-and-run baseball combined with one of the best pitching performances you are likely to see these days from NLCS MVP Roy Oswalt.
I’d love to see the Astros go all the way and win the World Series, but even if they don’t it is great that they were finally able to get over this hump. I have to admit I did not have high hopes for the Astros this season after they lost Carlos Beltran to free agency and Jeff Bagwell went on the disabled list.
Oddly enough, the last two Major League baseball games I have seen in person was the Astros vs. the Reds at Enron, oops, I mean Minute Maid Park in Houston and the White Sox vs. the Tigers at U.S. Cellular Field in Chicago.
Posted by Mike Thomas at 10/20/2005 No comments:

I was reminded reading this CNN piece on the dearth of TV programming on Saturday nights that it wasn’t always that way.

...during the early 1970s, CBS on Saturday night had the single best night of prime-time TV ever: "All in the Family," "M*A*S*H," "The Mary Tyler Moore Show," "The Bob Newhart Show" and "The Carol Burnett Show."

Wow! I remember watching those shows on Saturday nights when I was a kid.
Of course, today I don’t watch much television on any night of the week unless it’s a recorded version of Barney the Dinosaur.
I’m not particularly devoted to any TV shows these days with the exception of “Lost” and “ER.” I have been trying to watch the new show “Invasion” although I don’t know how long that will last. I’ve also caught a few episodes of the new “Night Stalker,” but I’m predicting it will be canceled after one season.

It’s kind of a shame that the networks aren’t even trying to do programming on Saturdays anymore, but I suppose it was inevitable with the advent of cable, DVDs and DVRs.
I think it would be interesting, though, to find out how many people stay home on Saturday nights to watch their DVD collections of “The Mary Tyler Moore Show,” “M*A*S*H” and “All in the Family.”
Posted by Mike Thomas at 10/19/2005 No comments:

It could be raining indictments next week in Washington.
Rumors are rampant with some sources saying as many as 22 potential indictments could be handed down encompassing everyone from Vice President Dick Cheney all the way down.

Another widely circulated rumor states that if Cheney is forced to step down he would be replaced by Condi Rice.

Of course, no one knows what is going to happen at this point, a testament to the professional manner in which Special Counsel Patrick Fitzgerald has run a relatively leak-free shop.
But the NY Times reports today that

Fitzgerald “has no plans to issue a final report about the results of the investigation, heightening the expectation that he intends to bring indictments, lawyers in the case and law enforcement officials said yesterday....
By signaling that he had no plans to issue the grand jury's findings in such detail, Mr. Fitzgerald appeared to narrow his options either to indictments or closing his investigation with no public disclosure of his findings, a choice that would set off a political firestorm.”

I think there is zero chance that he would just shut down his investigation at this point, so the odds are that the political firestorm is about to begin.
Posted by Mike Thomas at 10/19/2005 No comments:

Oh, agony! I can’t believe the Astros lost last night. They were one strike away from celebrating their first trip to the World Series ever and then everything just fell apart. That was one of the most painful, last-minute setbacks I have ever seen.
They still have two more chances to secure another victory and win a trip to the big game, but having that victory last night snatched away at the last possible moment may have shaken their confidence. I hope not.
The Astros and the Rangers are the two oldest teams in Major League Baseball to have never been to the World Series. It’s just not fair, I tell you!! If they don’t win tomorrow I’m going to stamp my feet and whine some more!
Posted by Mike Thomas at 10/18/2005 No comments:

The Express-News is letting its readers pick the comic strip that will replace Calvin and Hobbes when its limited run ends at the end of December. The good news is that two of the five comics in the running look to be really good - Candorville and Retail (which oddly seems to have no web presense whatsoever). The bad news is that two other choices seem to be really lame - Brevity and Bliss - and one is just awful - Prickly City.

The fact that they might bring back the wretched Prickly City is motivation enough for me to participate in their little survey.
Posted by Mike Thomas at 10/17/2005 No comments:

I didn’t get the big Valerie Plame/Judith Miller story in my Sunday New York Times this weekend and this appears to be the reason.
Miller was so uncooperative working with her own newspaper that they busted their deadline and couldn’t get the story into the edition that went out to national subscribers like myself. And to top things off, they didn’t deliver my Monday paper so I can’t even see if they ran it the next day or not. So I had to settle for printing up a web version of the story which is highly annoying.
Posted by Mike Thomas at 10/17/2005 No comments:

This story in the Washington Post really shows how rotten the core of the conservative movement has become since it gained power.

The Post tells the story of how a bill to ban Internet gambling went down to defeat back in the summer of 2000 after looking like it was on its way to being passed overwhelmingly. The bill was scuttled at the last minute, according to the story, by a senior aide to Tom DeLay at the behest of conservative super-lobbyist Jack Abramoff. I guess that DeLay managed to keep his hands clean on this one since the Post is forced to lay the whole thing at the feet of his senior aide Tony Rudy, as if it was a freelance operation and DeLay wasn't fully versed with what was going on.

Abramoff helped scuttle the bill on behalf of his client eLottery Inc. which would have been out of business if the bill had become law. What is most amazing is that Abramoff was able to pull this off with the help of a number of the key players in the religious right establishment which is popularly believed to be opposed to gambling.

The work Abramoff did for eLottery is one focus of a wide-ranging federal corruption investigation into his dealings with members of Congress and government agencies. Abramoff is under indictment in another case in connection with an allegedly fraudulent Florida business deal...

Abramoff quietly arranged for eLottery to pay conservative, anti-gambling activists to help in the firm's $2 million pro-gambling campaign, including Ralph Reed, former head of the Christian Coalition, and the Rev. Louis P. Sheldon of the Traditional Values Coalition. Both kept in close contact with Abramoff about the arrangement, e-mails show. Abramoff also turned to prominent anti-tax conservative Grover Norquist, arranging to route some of eLottery's money for Reed through Norquist's group, Americans for Tax Reform.

So the former head of the Christian Coalition and the leader of the Traditional Values Coalition were both on board this effort to prop up Internet gambling which is little more than outright robbery. That just shows that their real committment isn't to "values" so much as it is to the all-mighty dollar.
Posted by Mike Thomas at 10/16/2005 No comments: