Most conservatives I know are still in denial about the 2006 midterm election results. They want to blame their loss on their party’s failure to crack down on domestic spending programs - that tiny part of the federal budget that pales in comparison to the Defense budget and the Entitlement programs. This, of course, is ridiculous.

The election was all about Iraq - Bush’s quagmire - and I think we have only seen the tip of the iceberg when it comes to the electorate’s disgust for this bloody debacle. I will predict right now that no Republican will win the 2008 presidential race, especially if this war drags on for another two years as is likely. And any Democrat who wasn’t sufficiently opposed to the war will have difficulties getting elected - including Hillary Clinton. It’s ironic that Hillary’s decision in 2003 to play it safe and support Bush’s war resolution could turn out to be the biggest albatross around her neck in 2008. Personally, I hope she decides to sit this election out and let Al Gore have another shot at it, but I’m not sure her financial backers would support that decision after pouring so much money into her Senate re-election campaign against token opposition.

The war opponents were right from the beginning. That could not be more clear today as the Iraq Study Group’s report shows. It will probably take us another two to three years to fully extricate ourselves from that mess, and many more American soldiers will die as a result. And in the end we will have little to show for it. There is no “democracy” in Iraq today. The country is divided into warring factions and there is no “good” side for us to back.

On the one hand we have the Sunnis, the once-dominant minority that ruled the country with their authoritarian Baathist Party headed up by Saddam Hussein. On the other side we have the Shiites, the bitter and revengeful, newly-empowered majority led by Muqtada al-Sadr and his Mahdi army militia which is supported by the Iranian mullahs and the militant Hezbollah. The Mahdi Army is said to be more powerful than the fledgling Iraqi Army that we are so desperately trying to prop up long enough for us to skeedaddle. There is no clear distinction between the good guys and the bad guys in this fight. Whenever a bomb goes off you might as well flip a coin to determine who was responsible.

That’s why we’ve got to get out. We are stuck in the middle of a turkey shoot and nobody wants us there. Even long-time war supporters like Republican Sen. Gordon Smith are finally acknowledging this reality.
Posted by Mike Thomas at 12/08/2006 No comments: 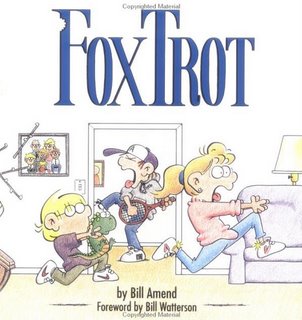 I saw the bad news today over at Off the Kuff: The Fox Trot comic strip will soon be joining the ranks of Calvin and Hobbes, The Far Side and Bloom County as popular strips that ended too soon.

This is awful! Fox Trot was one of my Top Tier comics strips that I looked forward to reading everyday. I remember when it first came on the scene in 1988 just as we were losing Bloom County. At least Bill Amend will continue to do the Sunday strips for now, but I will miss him during the rest of the week. It’s too bad that we keep losing these great strips while the dead wood strips just continue to hang around forever, some to the point of petrification.

Here are my Top Tier daily strips now that Fox Trot will be bowing out (* = only available online):

Dilbert used to be up there but has fallen off to my second tier list since being relegated to the inside business section where I often forget to go to read it.

Lie rats scurrying to get off of a sinking ship....

Why do Republicans hate America?

From the WSJ today:

Like a retreating army, Republicans are tearing up railroad track and planting legislative land mines to make it harder for Democrats to govern when they take power in Congress next month.
Already, the Republican leadership has moved to saddle the new Democratic majority with responsibility for resolving $463 billion in spending bills for the fiscal year that began Oct. 1. ....
The unstated goal is to disrupt the Democratic agenda and make it harder for the new majority to meet its promise to reinstitute "pay-as-you-go" budget rules, under which new costs or tax cuts must be offset to protect the deficit from growing.
....With Congress turning off the lights this week, there seems no chance of saving the appropriations process. Instead, most of the government will remain on a stopgap bill through Feb. 15, and in kicking this can down the road, the Republican leadership has no idea where it will stop rolling.
"It's a demonstration of the irresponsibility of Republicans that they would leave this country with this mess," said the next House speaker, Rep. Nancy Pelosi (D., Calif.). "But we won, we will deal with it."


Heaven forbid that the Sore-Loserman Party would actually work with the incoming majority for the benefit of the American people. Their goal now is to make everything as crappy as possible so that in two years they can claim that Democrats are to blame for the mess.

Update
More on this from Kevin Drum:

"It's astonishing that this hasn't gotten more attention. Do you remember all those stories that made the rounds after the 2000 election about outgoing Clinton officials trashing Air Force One and the White House before skipping town? There was nothing to it, of course: a few pranks here and there, but otherwise just the normal wear and tear typical of previous transitions, according the General Services Administration, which had (naturally) been called in to do a scorched-earth investigation. Finally, after weeks of anonymous leaks accusing the Clintonites of major vandalism, the director of the White House Office of Administration was forced to admit that he couldn't document any damage or repairs.

But the stories! There were hundreds of them, all agog over the news that a few staffers had removed the W keys from their keyboards. So immature! So childish!

But Republican legislators punting on half a trillion dollars worth of spending bills because they're "tired" and they want to gum up the works for the incoming Democrats? It's barely worth a yawn. Some priorities, eh?"
Posted by Mike Thomas at 12/06/2006 No comments:

I thought the Express-News’ editorial endorsement of Henry Bonilla for the general election was pretty bad, but this re-endorsement for the run-off election is even worse.

Here it is in all of its truly pathetic awfulness:

A congressional showdown is under way, pitting Republican incumbent Rep. Henry Bonilla against a former colleague, Democrat Ciro Rodriguez.
The two once served together in Congress. Now they are fighting for the same seat — Congressional District 23.
The highly diverse district runs from western Bexar County all the way to El Paso County and is the largest congressional district in the country.
Bonilla, a seven-term congressman, is rightly criticized for putting the interests of his party over the needs of his constituents. That was well-evidenced when he sought to allow GOP House members, such as former Majority Leader Tom DeLay, to maintain their leadership posts even if indicted on felony charges.
But Bonilla sits on the powerful House Appropriations Committee, which is important for Texas and Bexar County.
Seniority is no small matter in Congress. Rodriguez had the potential to build on his seven years in office, but he lost his re-election bid two years ago — exceedingly rare for an incumbent.
The runoff election comes at an inopportune time — at the peak of the holiday season.
But that shouldn't stop voters from getting involved in this important race.
If you're a District 23 resident, be sure to cast a ballot, whomever you vote for.

If I were a Republican, I’d be ticked because that is about the lamest, weakest endorsement I think I have ever read. They start off by criticizing Bonilla over the Tom DeLay debacle and charge him with putting the interests of his party over those of his constituents. But then they demur and go ahead and endorse him based soley on his seniority (seven terms compared to four for Ciro Rodriguez) and his position on the House Appropriations committee.
But they fail to note that what little advantage Bonilla has in seniority is practically nullified by the change in House leadership. It will do Bonilla little good to have a few more years under his belt when he is stuck in the minority party for the next dozen years or so. But Rodriguez, however, could “build on his seven years in office” and wind up with a key committee or subcommittee chairmanship. Plus, we don’t yet know what committee assignments Rodriguez might score, but he could easily end up with a seat on the Appropriations committee too, possibly filling the seat that would be vacated by Bonilla.

So my question is are the editorial writers at the Express too dense to understand this? Or are they under some pressure to endorse Bonilla when they really don’t want to. My guess is the latter. I think the big bosses at the E-N expect that Bonilla, with his huge monetary advantage, will win the runoff and they don’t want to burn any bridges for themselves by endorsing his runoff opponent. And the editorial writers are either required to follow their bosses’ lead or they do not have the courage of their convictions. Whichever, it is a sad spectacle.
Posted by Mike Thomas at 12/04/2006 No comments:

This should pretty much seal Bush's status as the worst president ever. If even Donald Rumsfeld now admits that Iraq is a mess, the charade is over. It's time to pull the plug on this disaster. Bush needs to face up to the fact that his presidential legacy will forever be in the toilet and rather than trying to prop up some face-saving, ass-covering B.S. in Iraq, he needs to concentrate on doing something, anything with the last two years of his presidency.

Douglas Brinkley has a column that spells it out very clearly.

"...after six years in power and barring a couple of miracles, it's safe to bet that Bush will be forever handcuffed to the bottom rungs of the presidential ladder. The reason: Iraq..."