The Express-News’ new Opinion Page Blog - The Arena has been a pretty dull place recently. They’ve had a grand total of seven posts since they launched the blog on Jan. 27 and there have only been two people who have left comments including myself. In fact, I’m the only person who has commented over there since Feb. 4. I guess I scared everyone else away.
Posted by Mike Thomas at 2/20/2009 No comments:

I had no problem supporting Roland Burris being seated in the U.S. Senate a while back despite the fact that he was appointed by scandal-tarred Gov. Rod Blagojevich largely because I thought he was adequately qualified and because he appeared to be clean from all the pay-to-play allegations swirling around the governor then.
Now it appears that if Burris was clean it wasn’t for a lack of trying to get dirty. He has recently acknowledged that he tried to raise money for Blago while under consideration for the Senate appointment without any success. He surely hid this tidbit away from his fellow lawmakers knowing full well that it would have sunk his changes of getting the Senate nod. But now that the beans have been spilled there are lots of calls for his resignation. I cannot defend him at this point, although I still see him as a mostly sympathetic character. What concerns me are the calls to have him resign and then fill his seat with a special election - after state lawmakers pass a law allowing such an election to be held. I would only support such a plan if the governor can still appoint a temporary replacement. Otherwise, Illinois would be without full representation in the Senate for possibly months while the election campaign is underway.
No doubt, this prospect will delight Republicans. It is pretty clear right now that the only reason Norm Coleman is continuing his futile lawsuit in Minnesota is to keep Democrats from having another vote for as long as possible.
We just saw how crucial this is in light of the Republican strategy of filibustering everything that comes to a vote from here on out. Nevermind that Democrats have an overwhelming majority in the Senate, they will be stifled if Republicans can continue to tie up two or three Senate seats indefinitely. During the filibuster of Obama’s emergency stimulus package, we saw that there were just three Republican senators willing to crossover and support their country over their party.
Right now Democrats should have a 59-41 majority in the Senate, requiring just one Republican crossover vote to defeat a filibuster. But because Coleman has tied up Al Franken with his frivolous lawsuits, they only have 58 votes. If Ted Kennedy is sick and can’t make if for a vote, they are down to 57. Now if you take away Roland Burris for the duration of a special election campaign, they are down to 56 and suddenly three Republican crossover votes are no longer enough.
Democracy was never meant to be abused in this manner. At a minimum, we will need a temporary replacement if Burris is forced to resign and the Minnesota recount lawsuit should be wrapped up immediately or else allow Franken to be seated temporarily until it is done.
And finally, we desperately need to reform the filibuster that has been so misused and abused by the Republican minority.
Posted by Mike Thomas at 2/20/2009 No comments:

The case of Texas billionaire R. Allen Stanford looks like another example of the failure of Republican governance. This is the second massive case of financial fraud that the Republican-run Securities and Exchange Commission either missed or ignored.
Why was the SEC so feeble and toothless in its enforcement of security laws. It has been reported that there were numerous "red flags" about Stanford Financial Group, but each time the SEC responded with a small slap-on-the-wrist fine. Was it because of Stanford's political connections? The "pro-business" ideology of the Republican-controlled SEC? Or a combination of both?

Stanford is clearly a flight risk. There were already reports that he tried to get a one-way ticket to Antigua where his offshore business operations are based. So why, when they when the authorities finally tracked him down was he simply "served papers"?
As one blog commenter noted, they should have planted a marijuana cigarette on him so that he would at least be guaranteed to do some jail time. Because bilking countless people out of $8 billion apparently isn't a serious enough crime when you are wealthy and white.

On a related note, Phil Gramm's employer UBS has recently agreed to pay a substantial fine to the IRS for its complicity in shielding billions of dollars from U.S. clients from taxing authorities. UBS, the Swiss banking conglomerate, has also promised to hand over the names of several hundred of its U.S. customers who have used it to avoid paying taxes.
I anxiously await publication of that list. Two of my biggest pet peeves are wealthy tax cheats, and companies that set up in tax havens like Bermuda to avoid paying taxes.
Posted by Mike Thomas at 2/20/2009 No comments:

The Party of Nope 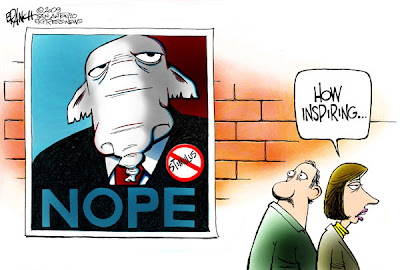 This is the best John Branch cartoon I've seen in a looooong time.
Posted by Mike Thomas at 2/19/2009 No comments:

They want to do WHAT with the bailout money???

General Motors and Chrysler now say they need another $14 billion in bailout money on top of $39 billion they already got from the Bush administration and in exchange they are promising to close five plants and layoff 47,000 workers.
Oh goody!
Excuse me, but as Robert Reich pointed out on NPR this morning, the whole point of the government-financed bailout and the stimulus package was to create and/or preserve jobs, not to bailout stockholders and corporate investors. I would hope that before the Obama administration hands over any more bailout money, that they go over some options to see what plan would be best for the workers involved. Otherwise, we will just end up spending billions more on top of this to pay for unemployment insurance, retraining and more stimulus for all the workers that the auto companies want to shed.
Posted by Mike Thomas at 2/18/2009 No comments:

So now it turns out that Gov. Sarah Palin owes back taxes on per diem income she received over the past several years.
And so you know what that means..... Sarah Palin is a TAX CHEAT!!!!!!!
At least, she is based on recent Republican definitions of that term. So that should pretty much sink any future presidential prospects she thought she had.
That’s too bad. I was looking forward to seeing whether Palin ‘12 could do any better than Quayle ‘96. Ha!
Posted by Mike Thomas at 2/18/2009 No comments:

Good! I hope that Andrew Cuomo wipes the floor with that idiot Paterson. And if McCarthy can defeat Gillibrand then all the better. I see Gillibrand as a potential Joe Lieberman clone.
Posted by Mike Thomas at 2/17/2009 No comments:

Today is a sad day for newspaper comics lovers who read the San Antonio Express-News.
Today, the E-N editors kowtowed to a group of hard-right whiners by canning "My Cage", one of the best new comic strips added to the section in recent years, and replacing it with the vile and grotesque "Mallard Fillmore."
Now there are three political strips crammed onto the comics page - two right-wing strips - Mallard and "Prickly City" sandwiching in the liberal "Doonesbury" strip.
It is a shame not just because they brought back the grotesque Mallard, but because they couldn't find any other comic in the section to replace. With so many old, tired, humor-free comics - the original authors long dead and now being churned out by syndicate hands - it is pathetic that they would choose to replace a fresh, new strip with living authors.
It is just one more reason for readers to abandon the print edition of the paper and seek out the comics they like online.
Of course, I'm not like the whiners who forced Mallard onto the funny pages. I don't cancel my newspaper subscription whenever things don't go my way. Instead, I will hold my nose and follow Mallard everyday and document the lies, the misconceptions, the grotesque and insulting caricatures and the offensive, humorless, mean-spirited venom that flows out of the pen of Bruce Tinsley everyday. I'm sure it will be loads of fun.
Posted by Mike Thomas at 2/16/2009 No comments:

I think this group of historians was awfully generous to George W. Bush by ranking him at No. 36 among all U.S. presidents. That is two slots behind Herbert Hoover, but still six slots from dead last which is where he probably should be.