Isn’t this a democracy?

President Bush carried through with his threat to veto the Iraq spending bill because Democrats included a timeline for withdrawing troops by October. This was no surprise.
What disturbed me, however, was this quote from Bush’s speech in which he tried to justify his veto:

Bush said the legislation was dangerous because it “substitutes the opinion of politicians for the judgment of our military commanders.”

Of course, Bush is an elected politician exercising his legitimate authority to veto the legislation and Republicans still have enough votes in the Congress to sustain the veto, so we are still operating in the realm of a democracy. But his explanation that military leaders should hold sway over political leaders is disturbing nonetheless, especially in light of the right wing’s recent flirtations with the idea of a military coup in this country.
Posted by Mike Thomas at 5/02/2007 No comments: 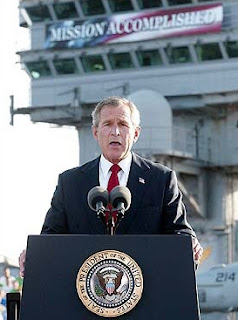 Happy Mission Accomplished Day!
It's been four years since President Bush strutted across the U.S.S. Abraham Lincoln to declare an end to major combat operations in Iraq. If he had had the good sense to start pulling troops out of Iraq at that point he would probably be a very popular president today and Republicans would still control both branches of Congress. But he stubbornly decided to press on with the most definitely unaccomplished mission and is now four years later he is preparing to veto a $124 billion funding bill because it includes non-binding language setting up a timetable to begin withdrawing troops in another year.
Bush passed up many more opportunities when he could have declared victory and gone home to the point where we are mired in a no-win situation that is hopelessly spiraling more and more out of control.
U.S. casualties in April were the highest for 2007 and I'm afraid they won't be the highest for the year. Meanwhile, our economy is beginning to buckly under the dead weight of so much deficit spending and our military has been stretched far past its limits. Recently it was reported that the U.S. chose not to confront China over a recent anti-satellite missile launch because we knew we couldn't back up our threats with our military mired in Iraq.
Have I mentioned before that Bush is the worst president ever?

Update
ThinkProgress has an excellent chart showing the "progress" in Iraq since Bush declared Mission Accomplished.
Posted by Mike Thomas at 5/01/2007 No comments:

The evidence just keeps pouring in.
Here is the latest example:

The Bush administration killed a proposal to clamp down on the student loan industry six years ago following allegations that companies sought to shower universities with financial favors to help generate business, according to documents and interviews with government officials.

The proposed policy, which Education Department officials drafted near the end of the Clinton presidency and circulated at the start of the Bush administration, represented an early, significant but ultimately abortive government response to a problem that this year has grown into a major controversy.

....the $85 billion-a-year student loan industry faces an array of investigations into questionable business practices that some officials believe could have been curtailed by the 2001 proposal.....

The abandonment of the 2001 proposal underscores what some consumer advocates and Democratic lawmakers believe is lax federal oversight of the financial aid system by a department they say is too cozy with the industry. More than a dozen senior department officials either previously worked in the student loan business or found high-paying jobs in the sector after they left the agency.

A government commission in Israel has issued a report that is highly critical of Prime Minister Ehud Olmert for his retaliatory invasion of Lebanon last year.

A government commission that probed Israel's summer war against Hezbollah guerrillas in Lebanon accused Prime Minister Ehud Olmert on Monday of "severe failure," saying he hastily led the country into the conflict without a plan.
A copy of the report obtained by The Associated Press cited a "severe failure in the lack of judgment, responsibility and caution."

Wow! That sounds awfully familiar. Do you suppose Olmert was following the Bush administration’s playbook a little too closely?
It’s refreshing to see that people in Israel are just as critical of Olmert as I was.
Posted by Mike Thomas at 4/30/2007 No comments:

Email ThisBlogThis!Share to TwitterShare to FacebookShare to Pinterest
Labels: Israel

It could not be more painfully obvious after reading this NYTimes story that we are just wasting our money in Iraq.

In a troubling sign for the American-financed rebuilding program in Iraq, inspectors for a federal oversight agency have found that in a sampling of eight projects that the United States had declared successes, seven were no longer operating as designed because of plumbing and electrical failures, lack of proper maintenance, apparent looting and expensive equipment that lay idle.
.....
At the airport, crucially important for the functioning of the country, inspectors found that while $11.8 million had been spent on new electrical generators, $8.6 million worth were no longer functioning.

At the maternity hospital, a rehabilitation project in the northern city of Erbil, an expensive incinerator for medical waste was padlocked — Iraqis at the hospital could not find the key when inspectors asked to see the equipment — and partly as a result, medical waste including syringes, used bandages and empty drug vials were clogging the sewage system and probably contaminating the water system.

The newly built water purification system was not functioning either.

Officials at the oversight agency, the Office of the Special Inspector General for Iraq Reconstruction, said they had made an effort to sample different regions and various types of projects, but that they were constrained from taking a true random sample in part because many projects were in areas too unsafe to visit. So, they said, the initial set of eight projects — which cost a total of about $150 million — cannot be seen as a true statistical measure of the thousands of projects in the roughly $30 billion American rebuilding program.

I would imagine that the projects in the areas now deemed "too unsafe to visit" are probably not faring much better and most likely are doing far worse.

most of the problems seemed unrelated to sabotage stemming from Iraq’s parlous security emsituation, but instead were the product of poor initial construction, petty looting, a lack of any maintenance and simple neglect.

And we can't even blame the problems on the terrorists. Apparently it is just plain old incompetence - a hallmark of the Bush presidency - that is at fault here.
Posted by Mike Thomas at 4/29/2007 No comments: