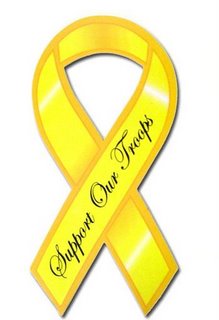 It’s getting easier to find my car in the parking lot these days. All I have to do is look for the one that still has one of those yellow-ribbon magnets on the bumper.
It used to be that the those yellow-ribbon magnets were everywhere, but now it seems as if the novelty has worn off. I think it is ironic that I would be one of the last ones still sporting a “Support the Troops” sticker on my car, considering that I have opposed this war from the start. However, the beauty of the yellow ribbon sticker was that it could mean different things for different people. For war supporters it meant “I support the troops, now go kick some butt!” While for war opponents it meant “I support the troops, now get them the Hell out of there!”
But today the predominant message seems to be one of bored indifference. Except for those people who have family or friends in Iraq, the war coverage doesn’t excite us anymore. In fact, it has become something of a bummer and most of us would just as soon watch a re-run of CSI-Miami rather than hear about the latest attacks by the insurgency. The war in Iraq is suffering the same fate as a once-successful football team that is now having a string of losing seasons. When the team is winning, everyone is a fan. But when it is losing, the fans disappear and move on to the next winning team.
There are still some diehard fans of the war, cheering enthusiastically regardless of the reality in Iraq. And there are still some diehard opponents of the war who insist (rightfully so in my opinion) that we need to pull the plug on the whole operation. But the vast majority of folks in the middle seem to have just lost interest altogether. They seem content to just let Bush and Co. coast along with the status quo until his term in office ends. And the dearth of yellow-ribbon stickers on cars is just one small indication of our national boredom with the war.
Posted by Mike Thomas at 9/12/2006