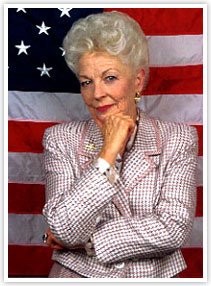 One of my favorite politicians has died.
Ann Richards was 73.
It was a thrill to see her win the governor's election in 1990, defeating a prominent Aggie by the name of Clayton Williams. How prominent? The Texas A&M Association of Former Students building is named after him, if that's any indication.
I still have my "Aggies for Ann Richards" T-shirt from her first gubernatorial campaign. A very rare item indeed.
I had an Ann Richards for Governor bumper sticker on my truck when I got married. And one of the first trips my wife and I took after our honeymoon was to go to Ann Richard's inauguration in Austin.

I thought she did an excellent job as governor and truly deserved a second term. Her one big mistake, in my opinion, was signing the Texas Lottery into law. Unfortunately, I think public support for a lottery back then was so strong that it would have been hard for any politician to stand in its way and it probably would have been approved regardless of who was governor.
I only got to meet Richards one time, during an Aggie Democrats function during her first campaign (Carol Channing was there too!) In 1994, she did not campaign in Kerrville (one of the most solidly Republican areas in the state) so I did not have the opportunity to interview her like I did George W. Bush.
Bush wasn't a bad governor, but he has been a lousy president. It is too bad that Ann Richard's political career ended so soon. If she had won re-election, and Bush had been forced to go back and do something he was good at, like being part-owner of the Texas Rangers, then things would be very different today. We would not be bogged down in Iraq. Osama bin Laden would already be dead or captured. And we might even still have a surplus.
Rest in Peace, Ann Richards.
Posted by Mike Thomas at 9/13/2006