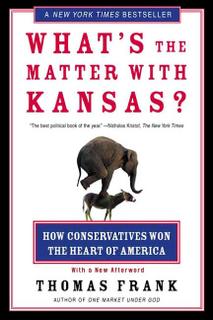 I found a copy of What's the Matter with Kansas?: How Conservatives Won the Heart of America at Half-Price Bookstore the other day and have just started reading it.
It is a facinating, although somewhat depressing book, from my perspective. I could easily see how you could ask “What’s the Matter with Texas?” since the Lone Star State was also once a populist stronghold where progressive ideas held some sway.

Here is an excerpt:
Hard times, instead of snapping people back to reality, only seem to stoke the fires of the conservative backlash. Indeed, those segments of the working class that have been hardest hit by the big economic changes of recent years are the very ones that vote Republican in the greatest numbers. We seem to have but one way to express our anger, and that’s by raging along with Rush—against liberal bias in academia, liberal softness on terrorism, liberal permissiveness, and so on. Our reaction to hard times is thus to hand over ever more power to the people who make them hard. In fact, the election of 2002 provided a perverse incentive to the men who gave us the dot-com bubble and the Enron fiasco: Keep at it. The more you screw the public over, the more they will clamor to cut your taxes. The more you cheat and steal, the angrier they will become—at the liberal media that expose your cheating and stealing.