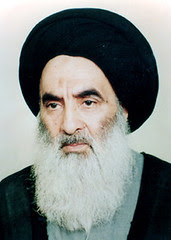 Now that we've tossed Hussein out finally, it looks like we may be helping to establish another Khomeini-like government. And remember that this is the guy that Bush is counting on to serve as a beacon of freedom that will spread across the rest of the Middle East.
Posted by Mike Thomas at 2/05/2005