RNC shoots own foot with first attack on Kagan 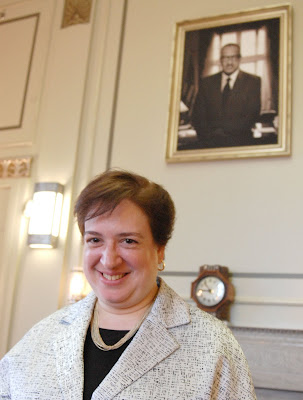 One of the first attacks by the Republican National Committee against Elena Kagan, Obama’s Supreme Court nominee, is embarrassingly misguided and profoundly stupid.
They are trying to score cheap points by tying her to a quote that former Supreme Court Justice Thurgood Marshall made in which he said that the U.S. Contitition as originally written was “defective.” Kagan, who once served as a law clerk for Justice Marshall, made a reference to that speech in a paper she wrote honoring Marshall shortly after his death.
“Does Kagan Still View Constitution ‘As Originally Drafted And Conceived’ As ‘Defective’?” the RNC asks ominously in its new line of attack.
Why yes, you MORONS! It most certainly was defective considering that it tolerated slavery and considered black people to be only 2/3rds a person for purposes of representation. That is the “defect” that Marshall was specifically referring to. We don’t even have to get into the fact that women were not allowed to vote or participate in government or any of the other myriad problems which have been addressed over the years by the Constitutional amendment process.
What IDIOTS!!! But I guess that they know who their audience is and that there will be plenty of rank-and-file GOP voters who will be “outraged” when they are told that Kagan thinks the Constition was flawed.
Posted by Mike Thomas at 5/10/2010